He has already surfed some of the most beautiful waves in the world. Last year, he even spent six months in Tahiti to discover the mythical spot of Teahupo’o which will host the Olympic event of the 2024 Olympics. In turquoise water and facing more perfect waves every day, Ian Fontaine n yet never forgot what his daily life was and would soon become again. A perpetual quest for waves that aren’t too windy in water that often tops out at 17 degrees, even in the middle of summer. Based in Quimper (Finistère), the 28-year-old surfer is a lover of Brittany. After his parenthesis in Polynesia, Ian Fontaine embarked on another mission this winter to show the daily life of Breton surfers. In the “Fun first” series he made with his friend Gaetan Duque, the French rider does not show his best surfing. The main thing was elsewhere.

The idea germinated in the heart of a stormy winter after having surveyed Finistère in search of a suitable spot. “When we film, we always try to have the most beautiful waves, the images that slam, the best sessions. But that does not necessarily describe our daily lives. Often in Brittany, we have rotten conditions but that does not prevent us from laughing. That’s what we wanted to show,” explains Ian Fontaine.

This winter, the surfer has therefore put on his thickest wetsuit, his balaclava, and criss-crossed the region in search of “ugly” or low-rated waves. Here, as everywhere else on the French coast, the number of practitioners has exploded, sometimes giving rise to unpleasant crowds behind the bar.

“These are somewhat hidden or forgotten places. Isolated waves, with rocks in the middle, glued to the seawall or the outlet of a river. Not really the spots that make you dream.

Often alone, he sometimes struggled to get in the water and struggle to stand on windswept ridges of water. Far, very far from the paradise of Tahiti. “We know we don’t have the best waves on the planet. But we wanted to show our strengths. In Brittany, you can surf almost every day of the year if you look hard enough. We like to remember that surfing is a sport for friends,” says Gaetan Duque.

The co-founder of the Zephyr Surf School, a school located a stone’s throw from the famous La Torche spot, was not always able to get in the water to film the “exploits” of his friend Ian Fontaine. Too many currents or rocks. “It was sometimes muscular to film! Either way won’t see Ian’s best surfing but that wasn’t the point. We wanted to show this mission side more, this adventure to explore everything around. Brittany has such a rugged coastline that you can always find a sheltered spot. This is not the case in the South-West for example”. Even after fifteen years in the region, he who started with bodyboarding in Reunion admits “not knowing everything” about the secrets of Breton spots. 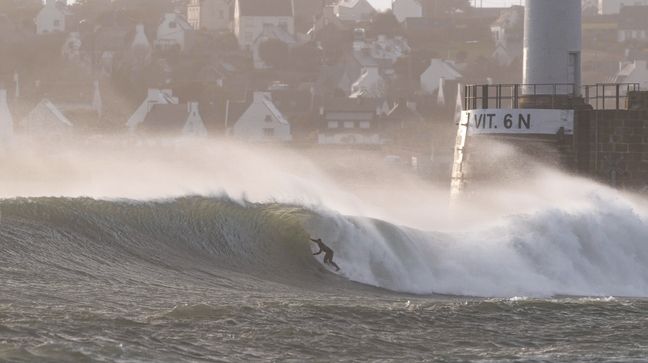 With this small video series financed by the sponsor Manera, the first episode of which was broadcast on Sunday, the two men hope to “uncomplex Breton surfers”. And invite them to explore places other than the most popular waves. “It feels like everyone wants to go to the same place, thinking it’s the best. Sometimes you have more fun in your little hidden wave than on the crowded spot, ”says the director. “Sometimes I’m too lazy to go there when the weather is bad. But as soon as we get in the water with the friends, we always come out with the banana,” adds Ian Fontaine. Addicted to his sport, the one who appears among the 30 best Europeans cannot spend a week without surfing. That’s good. In Brittany, it is very rare for it to be “flat” for so long.