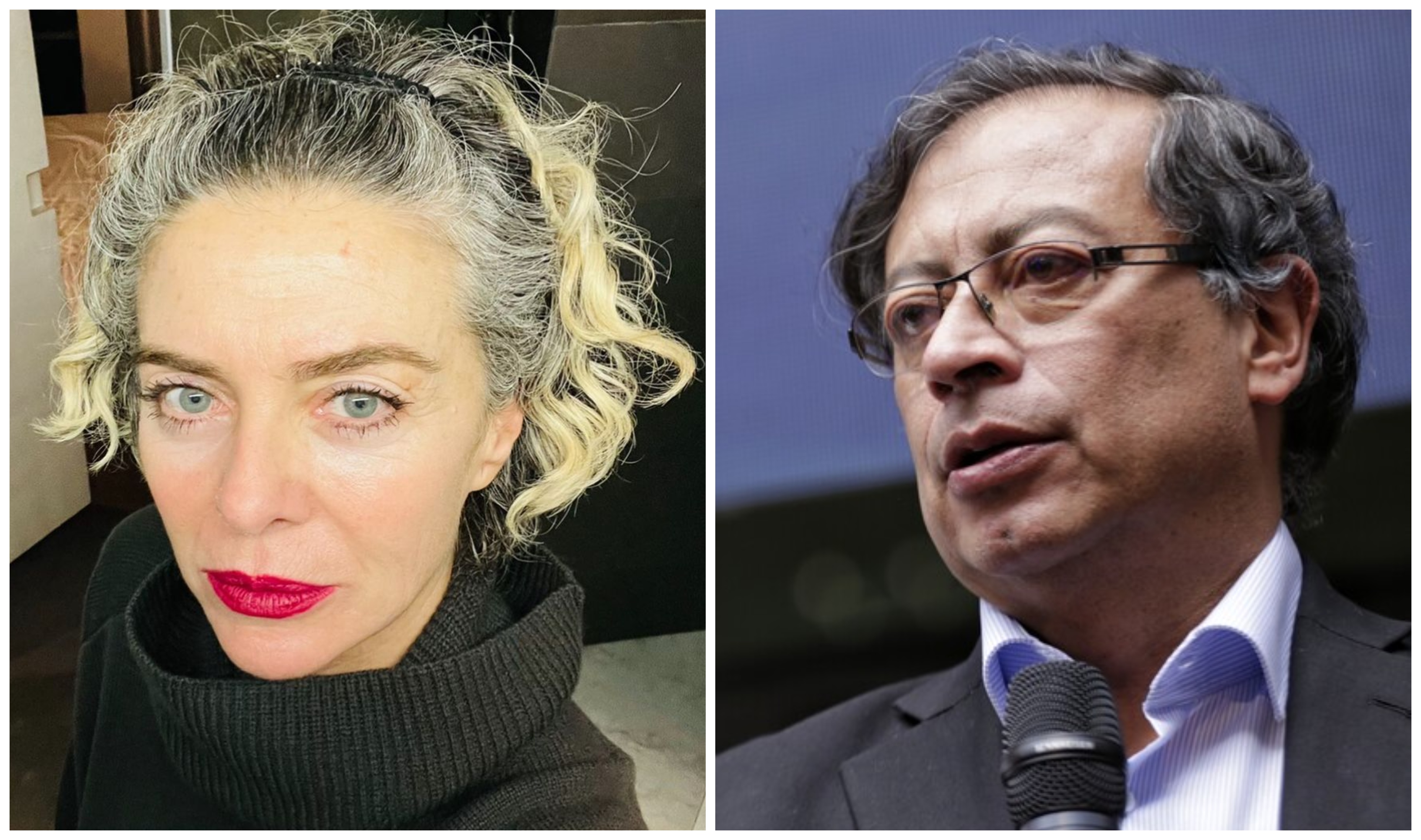 Margarita Rosa de Francisco has become, in this electoral contest, one of the voices that most defends the actions of the Historical Pact and its main figures, vice-presidential candidate Francia Márquez and her formula, Gustavo Petro.

Precisely, the actress and now a Philosophy student referred to the candidate for the House of Nariño again through her Twitter account, where she surprised more than one follower with a comment that she later reaffirmed with her support for the also senator of Human Colombia. .

“I don’t feel capable of advising anyone to vote for Petro. He will have my vote, yes, ”was part of what was trilled by the artist recognized for his participation in the telenovela ‘Café, con aroma de mujer’. Later, he reaffirmed that his support has already been decided and it will be, precisely, because of the candidate who has led a large part of the polls carried out in the country during the last year, adding that he can only be held responsible for his vote.

The trill, shared by de Francisco during this Monday, did not take long to receive reactions in the form of criticism and, also, supporting what was mentioned. There were even users who described it as “very bourgeois” by not compromising their voting intention.

It may interest you: Get ready: the pre-sale for the Gilberto Santa Rosa Bogotá concert has started 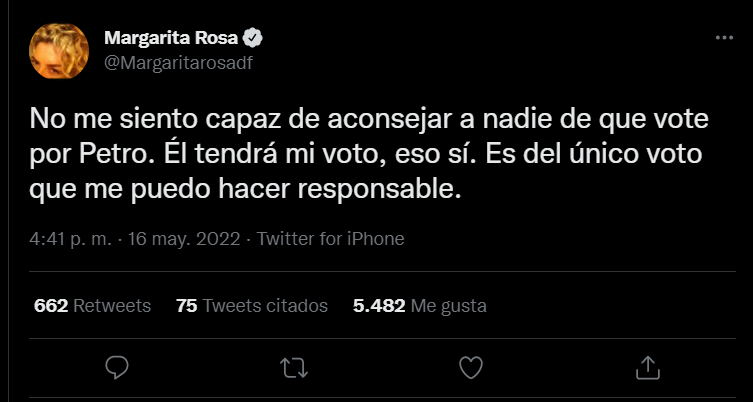 Through Twitter, Margarita Rosa de Francisco indicated that she does not feel “capable of advising anyone to vote for Gustavo Petro ahead of the first presidential round. PHOTO: Via Twitter (@Margaritarosadf)

“As if Fico’s candidacy alone, which is Duque’s continuity, was not enough to actively suggest the vote for Petro and France,” was the response of a tweeter. On the other hand, the academic and candidate for the Senate in the most recent legislative elections, Gilberto Tobón Sanín, agreed with what was proposed by Margarita Rosa.

“Ideal that each person concludes by their own free will and investigation for whom to vote. In politics there is no perfect candidate or formula in my opinion,” said the professor, adding that despite this, he will vote for Petro and Márquez. He even emphasized that, unlike the 2018 elections, the country will elect the former mayor of Bogotá. 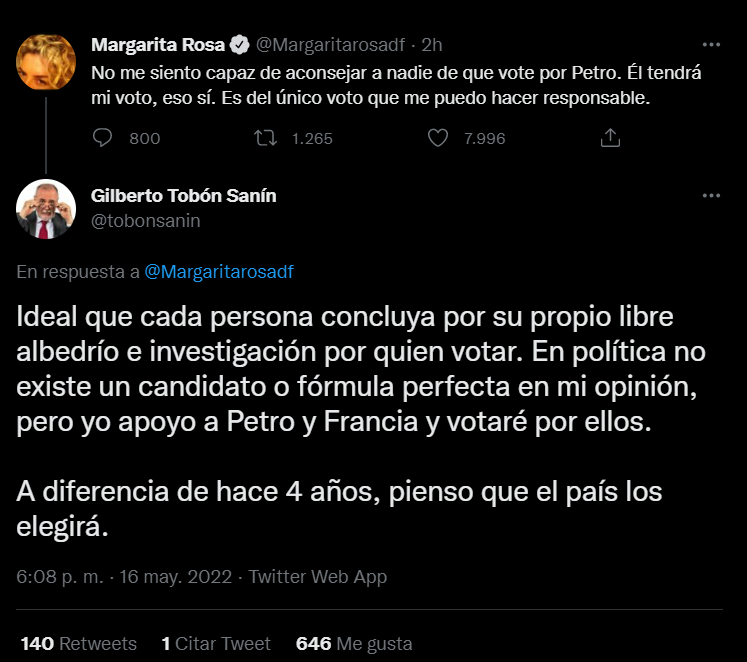 This is not the only time that de Francisco generates controversy on his Twitter account. Recently, he came out in defense of Isabel Zuleta, a senator elected by the Historical Pact, after the comments generated by a video where he appears in a meeting in which he spoke to several people about certain presidential candidates, such as Sergio Fajardo and Federico Gutierrez.

The senator said that “Fico did not appear on the national scene until recently. Fico was a surprise for everyone and we said ‘We already burned Fajardo’ and it was a hard task for the Attorney General and Comptroller to show that this guy cannot be in the presidency”. These words were harshly questioned from various political sectors, but Margarita Rosa came out in her defense.

“Those of us who follow in the footsteps of Isabel Cristina Zuleta know that she did not want to get involved in electoral politics. We insisted so much that she listened to us and I thank her. I don’t know if the form of a social activist’s speech should change because she is a senator, but she is the cause of it, oh, let her continue ”, The actress stated on her official Twitter profile. 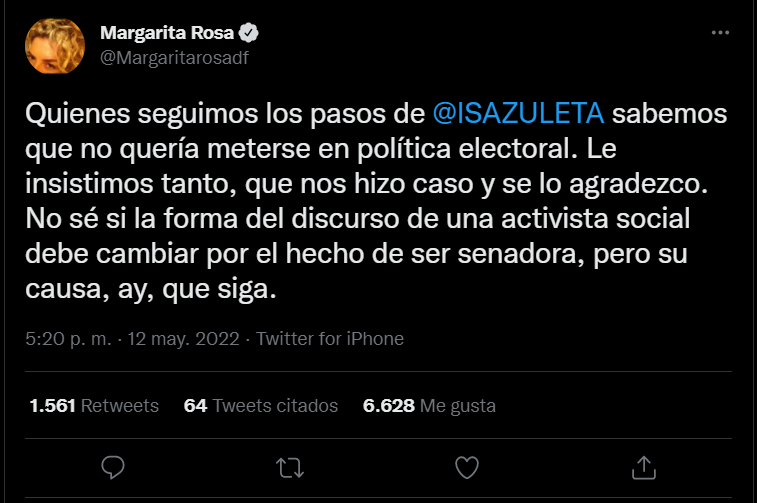 In addition to that, the actress recalled the failed conversation that the congresswoman from the Historical Pact tried to have with the presidential candidate of the Centro Esperanza coalition. “And that public dialogue that Isabel Zuleta wanted to have with Fajardo —long before she was a candidate for the Senate—, why did it never happen? Since there was never an answer, the wound does not heal. So it is very difficult to reconcile. Because it’s as if that urgent scream hadn’t mattered to him.”

Get ready: pre-sale has started for the Gilberto Santa Rosa Bogotá concert Uribe, Pastrana and presidential candidates are summoned to testify for the lawsuit against the registrar Alexander Vega