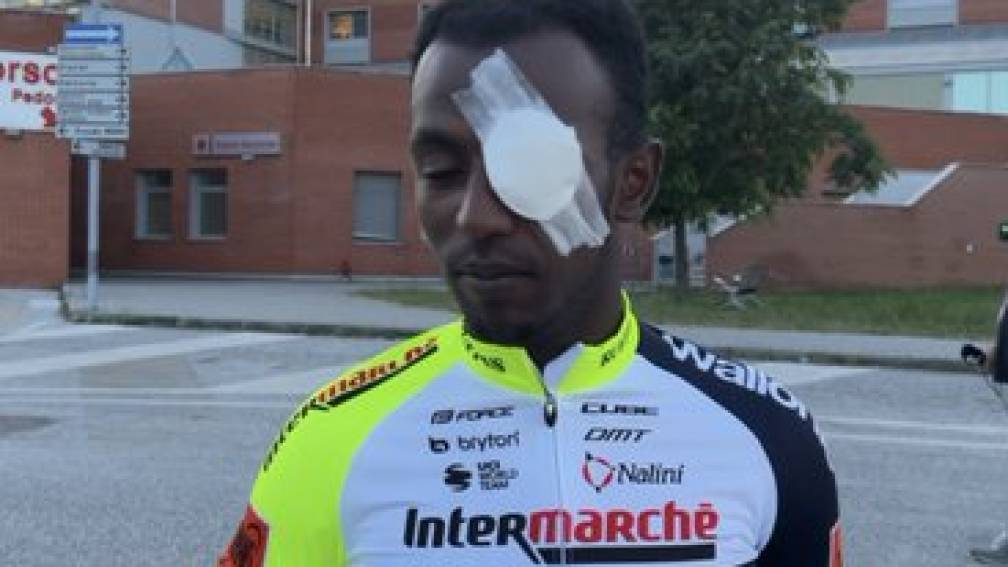 From the luckiest man in Italy and the surrounding area to the unlucky one in the pack. That could well apply to Biniam Girmay. The 21-year-old Eritrean made history today by winning a stage at his Giro debut.

He couldn’t enjoy that victory for long. The podium ceremony went wrong. Girmay got the cork from the spumante in his left eye and had to be treated in hospital.

He came out of there a few hours later with a bandage on his eye. It is not certain whether Girmay can continue his way in the Giro. According to the team doctor of Intermarché-Wanty-Gobert, that decision will be made tomorrow morning.

It is not the first time in this Giro that uncorking the Italian ‘champagne’ leads to precarious situations. Mathieu van der Poel already got the cork in the head after his victory in the first stage. And the cork flew right past Koen Bouwman’s face.

Since the start of the Giro, the Italian media has been pining for the day when super talent Girmay would be the first Eritrean to win a stage. Of course he had already made history by being the first black African to win a spring classic in Gent-Wevelgem.

But a victory in the Giro for Eritrea, the African country that once became a cycling madman as a colony of Italy, would be truly historic. With an impressive sprint, Girmay defeated his rival Van der Poel in the difficult final of the tenth stage in the Giro d’Italia. Girmay himself did not mince words. “When we started the Giro I knew there was a chance to win. Every day new history is made.”

Still panting from his sprint, he especially praised his team, in which the work of the 39-year-old and barely 53 kilograms weighing leader Domenico Pozzovivo stood out. “At 600 meters from the finish, Pozzo said: come on. And then he started the sprint great.”

During the interview, Girmay rose from his chair three times to receive congratulations. The Eritrean super talent has the gun factor in the peloton and beyond.

This also applies to Mathieu van der Poel, although his Eritrean rival put his patience to the test earlier in this Giro. The stage in Naples in particular, in which Girmay never lost sight of Van der Poel’s wheel for a second and took advantage of the show, caused quite a bit of controversy.

When later that day a quote from Girmay (‘Everyone looked at Mathieu and me’) appeared, the Dutchman responded with an ironic smiley.

Previous cycling generations would turn to an endless feud for less, just think of the shameless quarrels between sports directors Peter Post and Jan Raas in the 80s and 90s of the last century.

Perhaps that’s why some saw a cynical gesture in Van der Poel’s raised thumb before he crossed the finish line. Not at all, says Van der Poel. “I was just a little short at the end. I have no problem with him at all. That reaction was misunderstood. We all know that he is a super good rider, with a strong sprint. Today he attacks from very far and does not fall quiet. I like to be challenged.”

Van der Poel himself wanted to start the heated final with a cool head. But that was precisely what caused a setback. “The nylon stocking we put the ice in had fallen out of my shirt and ended up in my derailleur. So that went wrong and I had to do a solid chase to get back.”

However, that was not the biggest problem. “What killed me earlier was that attack at the end”, Van der Poel thought. “On Veloviewer (a program where the route of the race can be viewed in detail, ed.) we had seen that it was a fairly technical descent, so I put my entire team in the lead. But in practice it was a a bit against. And then I am beaten on value in the sprint.”

But that is a small loss compared to Girmay, who has to fear for his sequel in the Giro. Because not only more day success beckons, but also the purple points jersey. After his victory today, he has come within three points of leader Arnaud Démare.