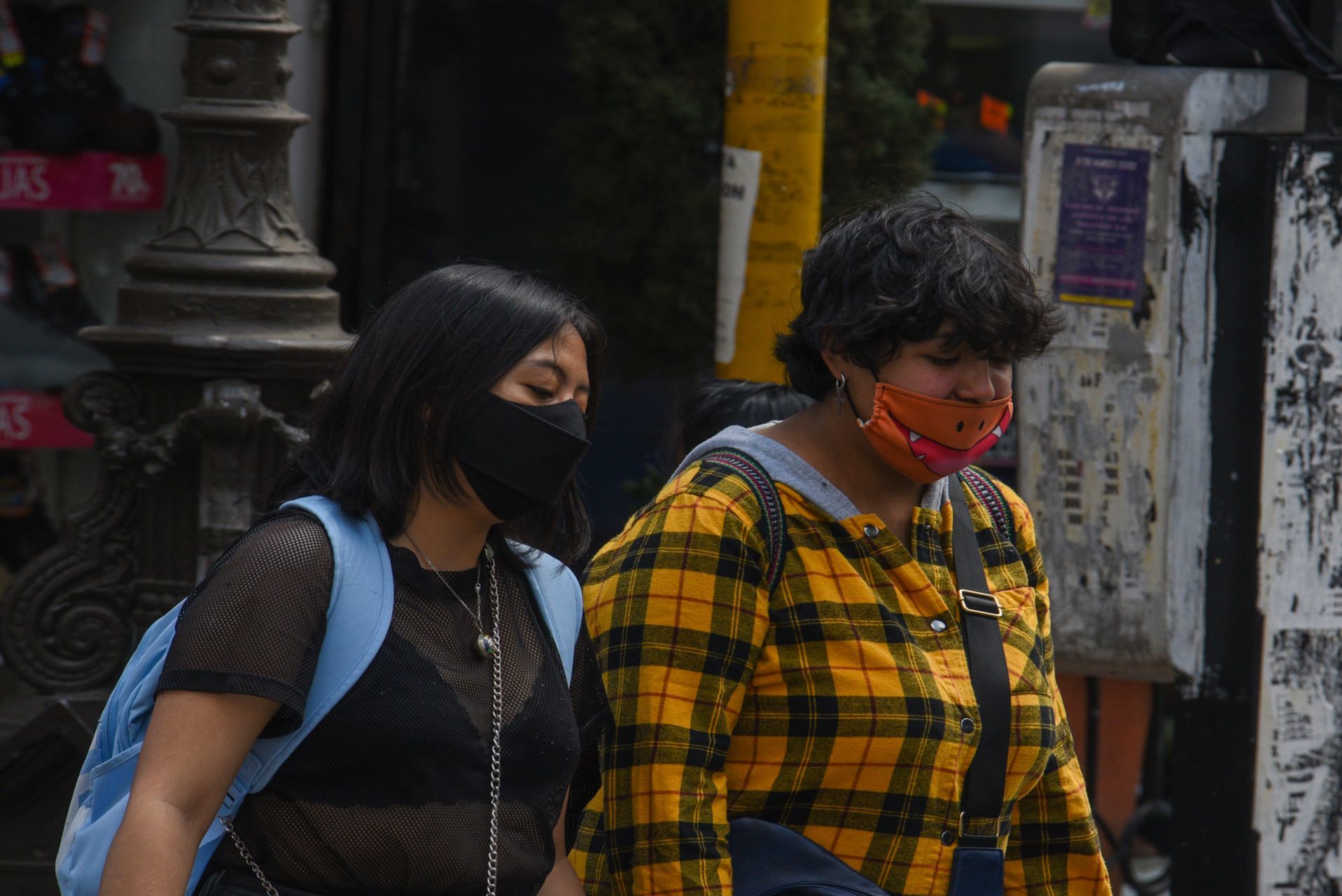 Through the General Epidemiological Directorate of the Ministry of Health (SSa) they updated the most recent figures of COVID-19 cases in Mexico. For the Weekly Technical Communiqué, corresponding to May 9-16, 2022, the health authorities reported a cumulative total of 5,751,579 infections and 324,611 total deaths since the health crisis began in the country.

So in the last seven days, 6,351 new infections and 148 recent deaths were recorded for the current epidemiological week. On the other hand, 698,879 suspected cases and 7,061 estimated active cases were reported throughout the country. 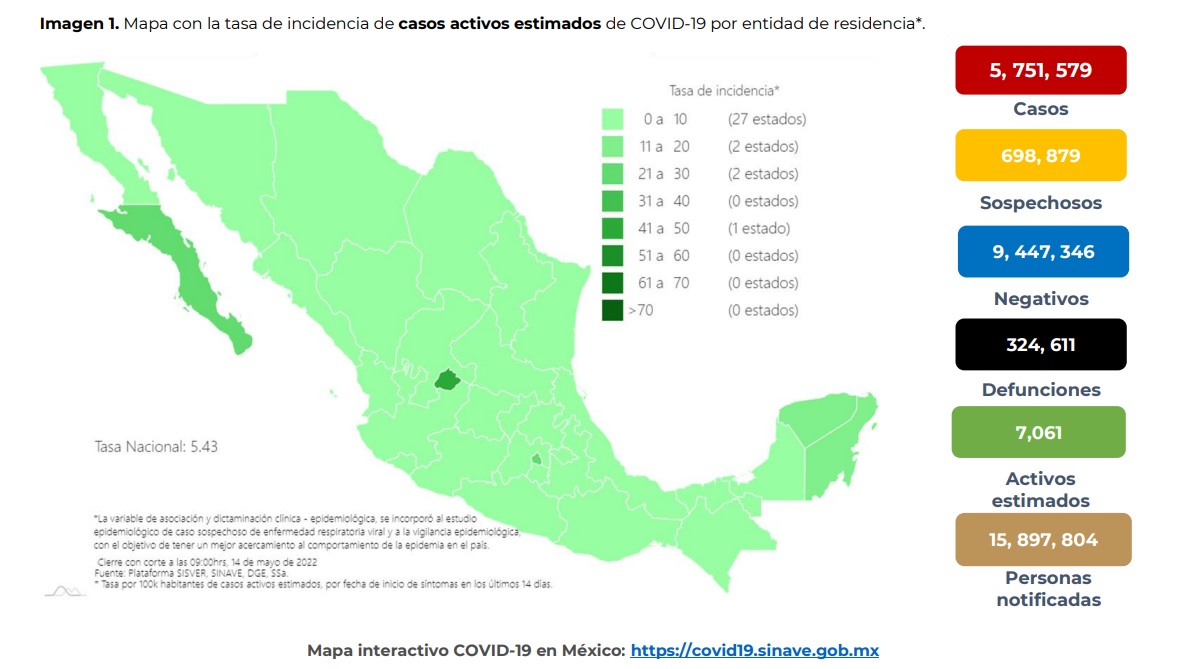 Regarding the confirmed cases accumulated by federal entity, the Mexican capital is the main one that continues to lead the graph, followed by the State of Mexico and Nuevo León. The first 10 states with the highest number of recorded infections are described below:

The health authorities also specified which is the population group with the most estimated infections so far. According to the observation of the last five weeks, most of the cases were registered in people between 18 and 29 years of age, in second place are people between 30 and 39 years old and finally the age group of 40 to 49 years old. 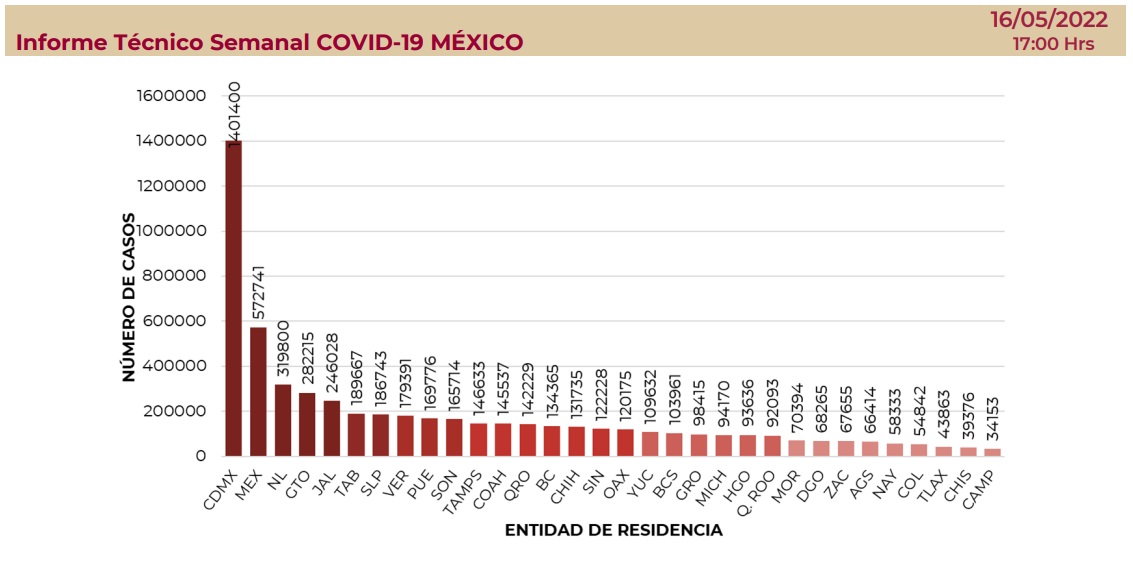 The CMDX is the entity that heads the graph of confirmed accumulated infections (Photo: Weekly Technical Report COVID-19 / SSa)

On the other hand, until the last news cut on Monday, May 16 at 5:00 p.m., 6,475 active infections were recorded in Mexico with an incidence rate of 5.0 per 100,000 inhabitants. It should be remembered that active cases are those that presented the first symptoms of the disease in the last 14 days, so the figure corresponds to May 1-14.

In the national panorama of the hospitalization of patients with coronavirus, there is only 3% occupancy in general beds, while the saturation of ventilated beds is only used by one percent.

Within the scenario of the application of the coronavirus vaccine, the Ministry of Health argued that as of May 16, a total of 206,941,649 doses have been registered since the vaccination program began in December 2020, which is reflected in a cumulative of 86 million 858 thousand 994 people who already have a supply of the drug. It was also added that 134 thousand 157 doses have been lost for different reasons. 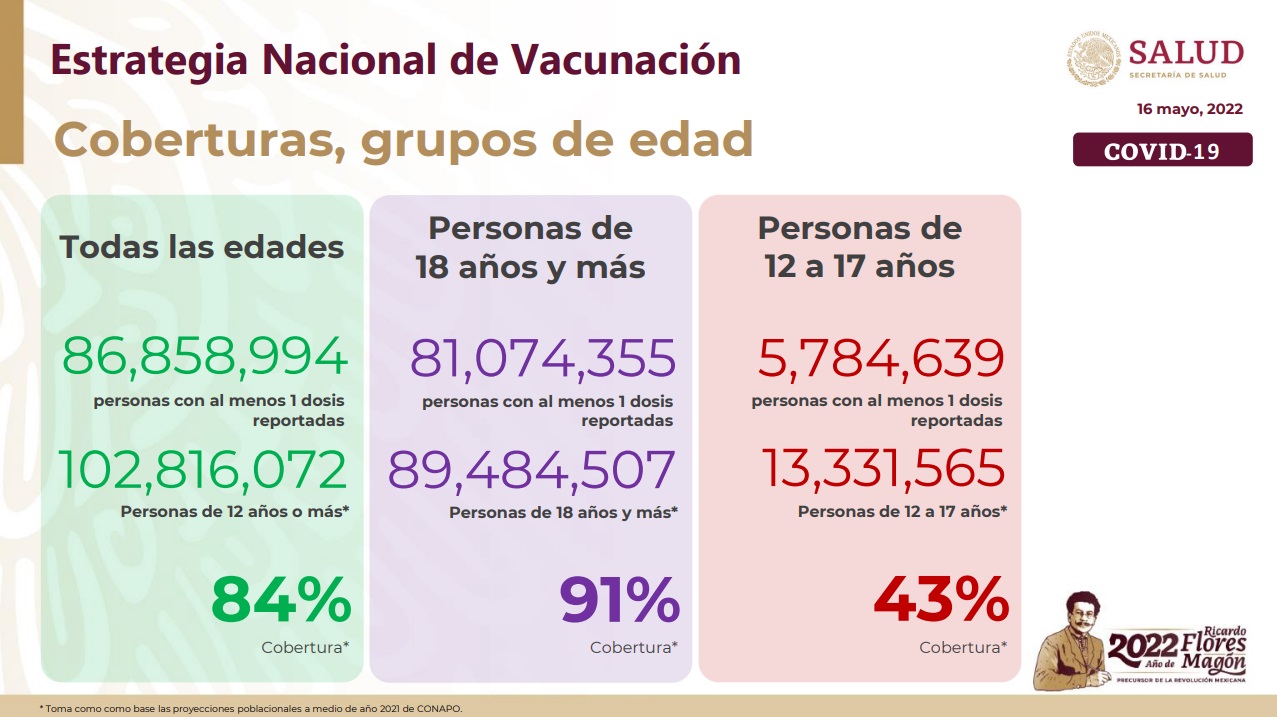 In the vaccination of minors between 12 and 17 years old, 5 million 784 thousand 639 people already have at least one dose (Photo: Weekly Technical Report COVID-19 / SSa)

For the vaccination stage of minors between 12 and 17 years of age, 5 million 784 thousand 639 people already have at least one dose, while 13 million 331 thousand 565 minors already have a complete immunization schedule, according to what they stated. the health authorities, so there is a coverage of 43 percent of the population group.

Regarding the application of the reinforcement of the antigen, 53,000,421 were counted, which reflect a coverage of 66 percent of reinforcements achieved.