The Security Secretary reported on Monday that the road police will carry out cuts to vehicular traffic on the occasion of the match to be played on next wednesday 18 May between Atlas and Tigers.

The closures, he indicated, will be carried out on the street Mount Carmel and Fidel Velázquez Avenuein the sections that comprise Sierra Leona street to Calzada Independencia. Therefore, said the corporation, motorists and drivers are suggested to take as alternate routes the roads:

In order for vehicular traffic to flow, added the Road Police, an operation will be deployed before, during and after the meeting, which will begin at 9:00 p.m.

“The works will be carried out with personnel standing on the ground and motorized units to speed up vehicular traffic, as well as ensure the safety of pedestrians, carrying out the corresponding road closures”added the corporation. 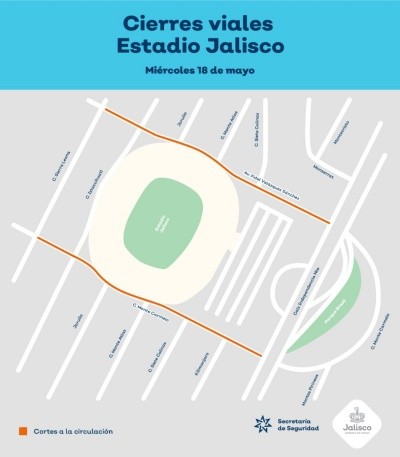 Finally, and in order to avoid setbacks and mishaps, the Road Police Station calls on the public to take into account the following recommendations:

Anticipate your transfers to arrive early and be able to calmly access the stadium Respect the road signs and the instructions of the operating personnel Respect the speed limits Avoid parking in prohibited places, covering garages or ramps for people with disabilities Use established parking lots Do not drive in case of having consumed alcoholic beverages