Everything Everywhere All At Once is, as the title suggests, everything at once. It’s a movie you can easily watch three more times after you walk out of the cinema. Publisher A24 now stands for a true quality mark and with this latest stunner it more than lives up to this reputation.

This review of Everything Everywhere All At Once is spoiler-free.

Take to the Multiverse

Everything Everywhere All At Once is a film about the Chinese immigrant Evelyn Wang (Michelle Yeoh) who has built a respectable life with her family. They’re doing well, it seems. The family has its own laundromat with washing machines as far as you can see. The family lives in a cluttered but cozy apartment above the launderette. Nevertheless, the lives of Evelyn and that of her husband Waymond and of her daughter Joy show some hairline cracks. For example, Waymond thinks about separating from Evelyn and her only daughter Joy is frustrated that she cannot be completely open about her relationship with her friend Becky to her grandfather Gong Gong.

With this, the film immediately discusses a number of important themes, without this seeming very forced. The combination of LGBTQ+ and Asian Americans is a theme that has clearly not been discussed much in mainstream movies. Everything Everywhere All At Once takes these little-discussed topics in a very natural way and puts them in a very fast roller coaster cart. This immediately draws a parallel with the chaotic life Joy seems to experience as the lesbian daughter of a fairly traditional Chinese family. I don’t think it’s always easy to understand what problems immigrant children have to wrestle with, but Everything Everywhere All At Once explains this in a very respectful way that makes it understandable for everyone. 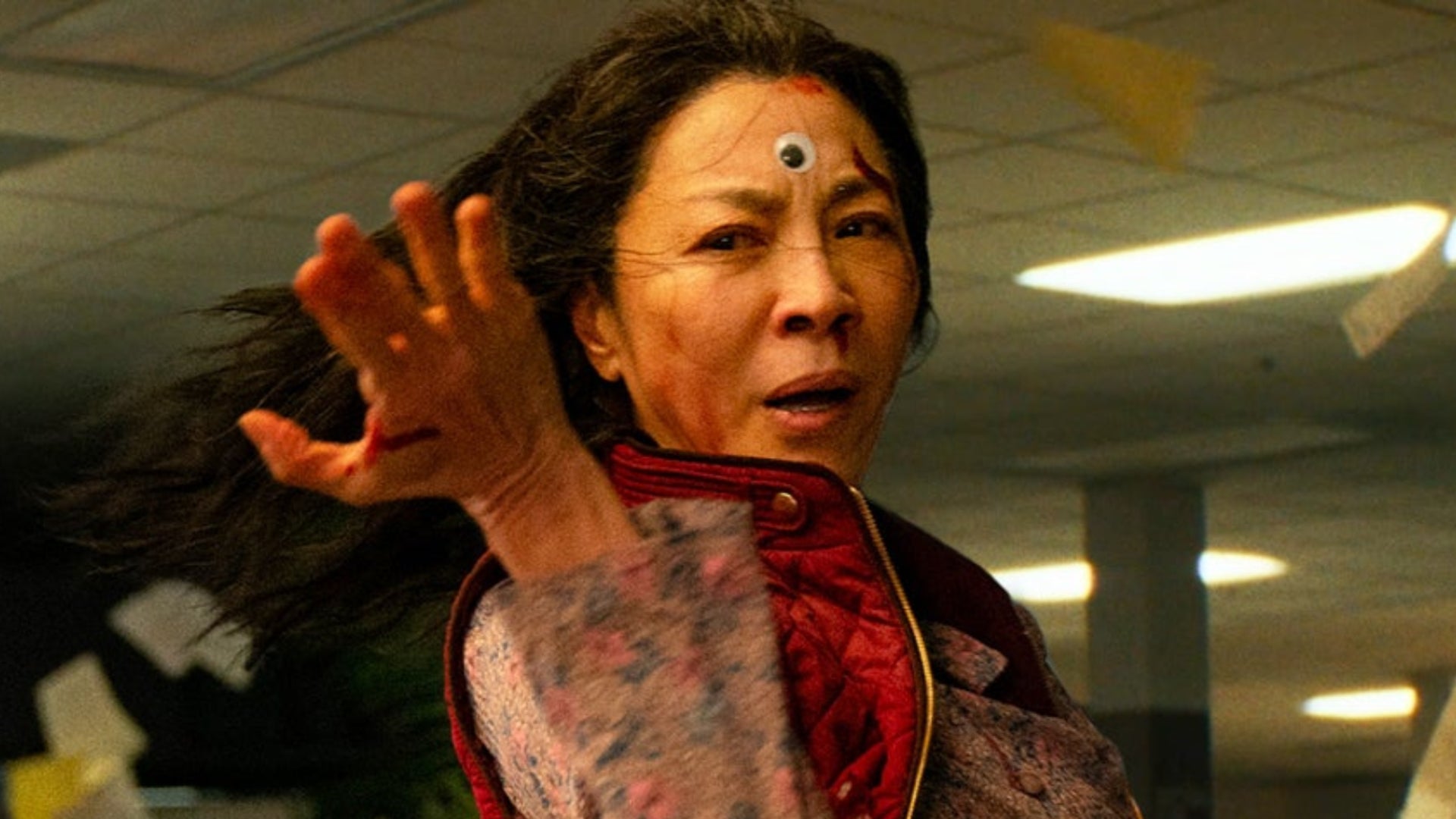 Michelle Yeoh with a googly eye on her forehead. Source: A24

Evelyn Wang herself is also looking for her identity. Driven by her normal life difficulties, she discovers in the Multiverse that she could have had a very different life. To do that, she had to make certain life choices at essential moments. This results in a journey through all sorts of universes, yielding one hilarious moment after another. The level of the jokes that are brought in Everything Everywhere All At Once is of an unprecedented level and is often presented in a smart way. You often feel the jokes coming, but is the delivery so good that the hall still goes flat.

This results in a journey through all kinds of universes, yielding one hilarious moment after another

At one point Evelyn is in the tax office because the family has some problems with the tax authorities. To do this, they have to come to an interview to provide a whole paperwork of documents. At one point, the viewer’s eye catches a trophy in the background, which coincidentally looks suspiciously like a butt plug. Not much later, the lady behind the messy desk discusses the price, while later in the film it is also referenced several times in a brilliant way. This is just the beginning, as A24’s latest film is overflowing with funny and clever references. So after watching the film you immediately have the idea that you have to see it again to really be able to absorb everything. That is certainly not a punishment.

With almost every character, directors Dan Kwan and Daniel Scheinert hit the nail on the head. We already knew that Michelle Yeoh was a great actress, but hopefully the general public will now recognize that more and more. Furthermore, Stephanie Hsu and He Huy Quan also play great roles, especially when they get into their roles as the characters from the Multiverse. Because they play completely different roles here than when they present themselves in real life, they can give free rein to creativity. James Hong also really steals the show as Gong Gong by playing an important supporting role in the Multiverse. 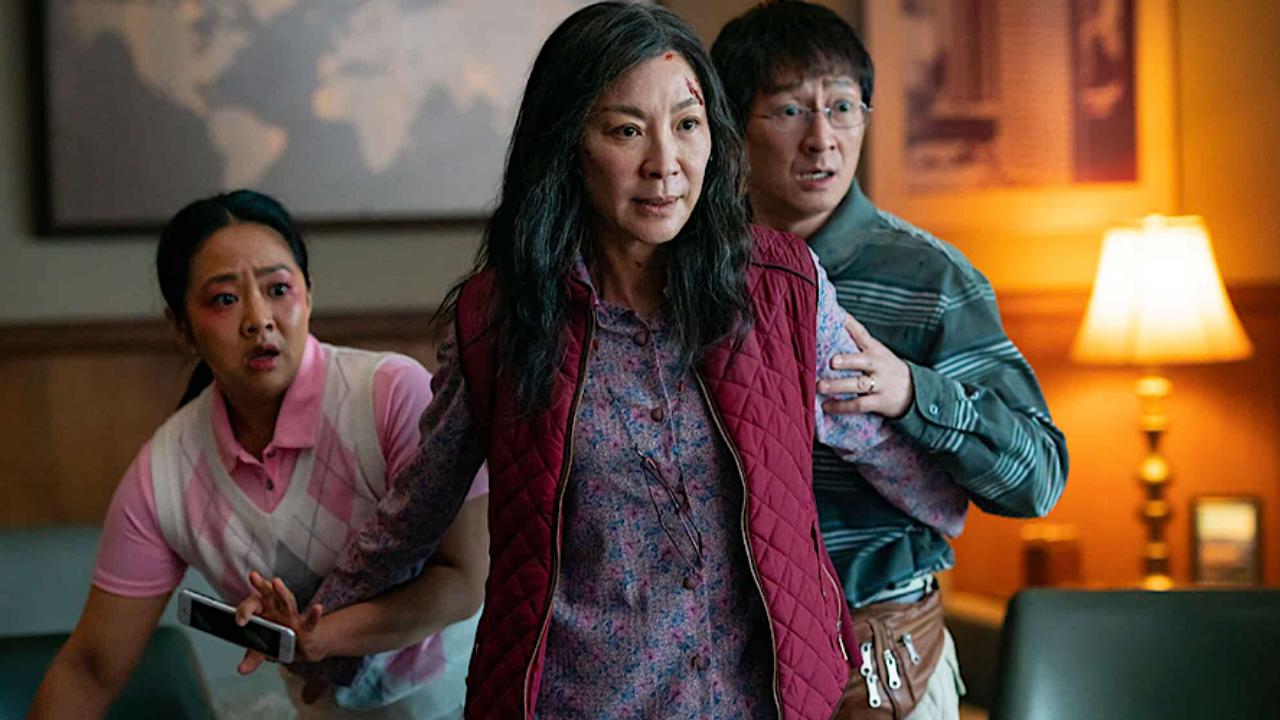 Despite there being little to fault Everything Everywhere All At Once, I don’t think it’s the movie of the year for me. The film has caused quite a stir in recent weeks, especially when it seemed for a while that the film would not be released in the Netherlands, but that it happened later. As a result, expectations were sky high and some of them have been fulfilled. The film pushes certain boundaries and is one of the few films that explains exactly what the rules are of the Multiverse that is being set up. The disadvantage of the excellent explanation is that it takes an awfully long time before the story is set up a bit. As a result, the first act feels a bit too long, while the ending may not get the space it deserved. Where at the beginning you have the feeling that it is somewhat long-winded, after the end you still have the feeling that the film should not have ended yet.

This makes Everything Everywhere All At Once not the absolutely perfect film that it could have been in an alternate universe, but still one hundred percent definitely worth watching. Preferably as soon as possible, on the big screen.

Everything Everywhere All At Once can immediately count itself among the better films of 2022. The humor in the film is of an unprecedented level, while it discusses difficult subjects in a light-hearted way. In addition, it discusses the Multiverse in a clear and understandable way. The first part of the film may be a bit long, but the fantastic characters in the film by Dan Kwan and Daniel Scheinert more than make up for it.