Review: The Sony WH-1000XM5 is one of the best noise canceling headphones | NOW 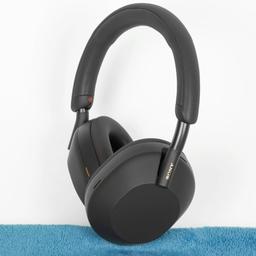 Silence has a high price, as the Sony WH-1000XM5 proves. The new noise-cancelling headphones from the Japanese company have a nice price tag at 420 euros, but in return you get a device that is possibly the best headphones on the market.

This is a shortened version of a extensive review of the WH-1000XM5 on Tweakers.

Sony has become a big name when it comes to noise canceling headphones in recent years. That reputation is largely based on the success of the MDR-1000X. These headphones, now almost six years old, formed the basis for many of Sony’s newer models.

These types of headphones often have a long life, because older models remain readily available for a sharply reduced price for a long time. The small differences between new and older models often keep the latter group attractive for a while.

The first thing you notice about the WH-1000XM5 is its appearance. That differs significantly, for the first time, from the classic MDR-1000X and its successors. The switch from metal to lighter plastic is particularly striking.

But the changes are far from just cosmetic. A doubled number of microphones should improve noise cancellation and make you better understood during calls. New drivers, a better Bluetooth chip and the ability to charge faster are also important differences.

The disadvantage is that this progress has a price tag of 420 euros. That is 200 euros more than the WH-1000XM4, Sony’s previous model, currently costs. Is the WH-1000XM5 worth that price?

The switch from metal to plastic is a matter of taste. The WH-1000XM5 is upholstered in fake leather and in any case looks clearly different from its predecessors. The design was well received by the editors. The disadvantage is that the WH-1000XM5 is less easily foldable due to the lack of hinges in the wishbone. You can flatten the ear cups, but that’s about it. The supplied carrying case is therefore also slightly larger than you might expect.

Fortunately, the new design does not affect the comfort. The WH-1000XM5 is an extremely comfortable pair of headphones that don’t get stuck after a few hours of use. The disadvantage is that the ear cushions are not easy to remove, which may hinder maintenance in the long term. The WH-1000XM5 is also not splash-proof. So watch out if you walk in the rain with this, because buying a new one is an expensive joke.

In terms of usage, little has changed since the WH-1000XM4. There are still two buttons on the left and a touch-sensitive part on the right, with which you can turn your music on or off with swipes and double taps. The function of the buttons can be adjusted via the Sony app, so that you can, for example, choose to change the noise canceling mode with a few presses of the button or call in the help of Google Assistant or Alexa.

In addition, well-known functions of the predecessor are present again, such as ‘speak to chat’. With this, the headphones automatically let ambient sound through as soon as the microphone hears that you are talking, so that you can still have conversations. There is also a sensor for wear detection, with which you automatically pause your music when you take off the headphones.

No noise and better intelligibility

The WH-1000XM4 is still one of the best noise canceling headphones on the market. However, the WH-1000XM5 tries to outdo its predecessor with eight built-in microphones instead of four and new algorithms for suppressing wind noise, for example. The optimization of the noise cancellation now takes place automatically and is currently not manually adjustable.

In our tests, the WH-1000XM5 is impressive. Low tones are effectively suppressed, better than comparable models from competitor Bose. The biggest improvement compared to the WH-1000XM4 is in the midrange, where buzz and traffic noise disappear a little better into the background. The hiss of the noise canceling itself, which was softly audible with the WH-1000XM4, has also disappeared.

To test the improved wind noise suppression, we stood in front of a fan. There was no audible difference with the WH-1000XM4. Might need stronger gusts for that.

The biggest improvement compared to the predecessor is the intelligibility during calls. This was a recurring problem with previous models, but thanks to the increased number of microphones and the algorithmic filtering of ambient noise, major steps have been taken. Even during the noisy crumpling of paper bags, we remained clearly audible. Also calling while sitting right in front of the fan did not cause any problems on the other end of the line.

Just like its predecessors, the WH-1000XM5 is a fine pair of headphones with an extensive package of features and pleasant operation. The noise canceling was already good, but is now better. And by improving intelligibility, Sony has solved an important shortcoming of the predecessors.

The WH-1000XM5 also charges faster, although the battery life has not changed when noise canceling is on. The sounds also remain warm, bass-rich and well adjustable for those who prefer a clearer sound.

Still, none of the above can do anything about the biggest stumbling block we encountered with these headphones: the price. The WH-1000XM5 has nice improvements, but it’s hard to justify $420 on that basis when the WH-1000XM4 is available for $220.

Not to mention the WH-1000XM3 and earlier models, which are available for even less. After all, these are still excellent products.