War in Ukraine: what to remember from Friday, May 13 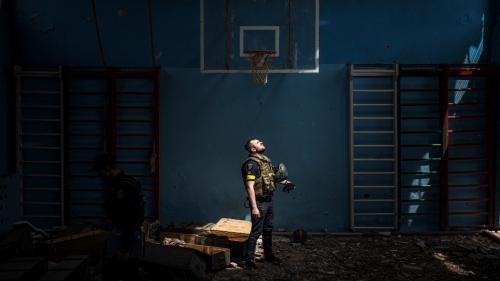 Another intense day on the diplomatic front. The European Union pledged on Friday May 13 to provide additional aid of half a billion euros to support Ukraine’s fight against the Russian invasion. On the ground, fighting continues in the east between Russian forces and the Ukrainian army, particularly in Mariupol.

Franceinfo looks back on what to remember from the day.

Faced with the continuation of the bombardments and the Russian offensive against Ukraine, the European Union announced that it was going to add 500 million euros to its financing of the Ukrainian military effort, bringing it “to 2 billion euros in total”.

The recipe is “clear”, EU foreign policy chief Josep Borrell told a G7 meeting in Wangels, in the far north of Germany: we need “more of the same thing”, namely more economic sanctions against Russia, support for kyiv, and also “continue to work to isolate Russia”.

On the subject of sanctions, the 27 members of the EU have still not succeeded in agreeing to gradually stop their purchases of Russian oil, Hungary having considered the waiver obtained insufficient.

French Foreign Minister Jean-Yves Le Drian assured kyiv of the support of the G7 “until Ukraine’s victory”. “We are not at war with Russia, it is Russia that is at war with Ukraine: there is an aggressor and an attacked and we support the attacked,” he stressed.

Another 600 injured in the Azovstal factory

Around a thousand Ukrainian soldiers remain holed up in the bowels of the Azovstal steelworks in Mariupol, the major southeastern port city besieged by Russian forces. “There are nearly 600 wounded on Azovstal, the Russians continue to bombard the military hospital”, testified from the factory, the deputy commander of the Azov regiment, one of the Ukrainian formations which are there.

“We will resist as long as we can (…), if we had not done so, this horde would go further,” he added during an online conference. “I would like the United States to help evacuate our wounded and mobilize all efforts to help extract our regiment” from this encirclement, he said.

International efforts, including those of Pope Francis, have so far proved unsuccessful in rescuing the Ukrainian soldiers entrenched in this city 90% destroyed by Russian bombing.

In Georgia, the pro-Russian authorities of the self-proclaimed republic of South Ossetia have announced that they want to organize a referendum on July 17 on its integration into Russia. This province, de facto independent of pro-Western Georgia, has been occupied by Moscow forces since a Russian military intervention in 2008,

“The time has come to unite once and for all.” “South Ossetia and Russia will be together, this is the beginning of a great new story”, declared the “president” of South Ossetia Anatoly Bibilov, raising fears of the appearance of another outbreak of tension, this time on the flank of Georgia, which has made a long-standing vow, like Ukraine, to join the European Union and NATO.

Frying on the line between Zelensky and Macron

On this question of the attitude towards the Kremlin, Ukrainian President Volodymyr Zelensky considered that French President Emmanuel Macron was trying “in vain” to dialogue with his Russian counterpart Vladimir Putin.

“We must not look for a way out for Russia, and Macron is doing it in vain”, regretted Volodymyr Zelensky Thursday evening on the Italian television channel RAI 1. Emmanuel Macron had affirmed Monday that, to end the war led in Ukraine by the Russian army, peace should be built without “humiliating” Russia.

“The President of the Republic has never discussed anything with Vladimir Putin without the agreement of President Zelensky. He has always said that it was up to the Ukrainians to decide the terms of their negotiations with the Russians”, defended himself from his side the French presidency on Friday.

As a direct consequence of the Russian invasion of Ukraine, Sweden and Finland, two members of the European Union who have remained outside military alliances for decades are due to announce their candidacy for NATO by the start of next week.

Russia had warned neighboring Finland in particular. And on Friday, the local subsidiary of the Russian electricity supplier InterRAO announced that it would suspend deliveries to this country from Saturday, citing payment problems. The Finnish operator, however, assured that it could do without Russian electricity, which represents “less than 10%” of its needs.

As for Turkish President Recep Tayyip Erdogan, he expressed his hostility to the accession of these two countries to NATO on Friday, at the risk of blocking the whole process which requires the unanimity of the members of the Atlantic Alliance.