Tsitsipas file in final of the Masters 1000 of Rome 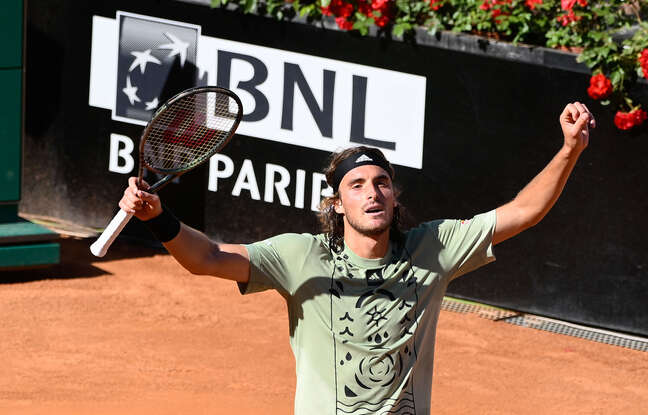 A first. Stefanos Tsitsipas will meet world number 1 Novak Djokovic in the final on Sunday, for a revenge for the final of the last Roland-Garros won by the Serb, or the Norwegian Casper Ruud (10th). The double winner of Monte-Carlo (2021 and 2022) faced Zverev for the third time in the semi-finals in less than a month, after Monte-Carlo (victory for the Greek) and Madrid (success for the German, beaten in the final by Carlos Alcaraz).

Between two players who know each other so well (12th opposition), the match was unsurprisingly ultra-tight on a central crushed by the heat, where the spectators appreciated the few drops sent into the stands by the watering attendant. Zverev, winner at Foro Italico in 2017 and runner-up in 2018, won the first set, relying in particular on a successful first ball and a bit of success to convert the only break point of the set. While having taken the time to take care of a lost butterfly on clay.

But the Olympic champion lost his luster in the second set with two double faults on his first game of service, at 0-1, which allowed Tsitsipas to break quickly and then race in the lead to equalize at one set everywhere. The Greek was again opportunistic to take advantage of the first break point that appeared in the third set. He then definitely took the upper hand, no longer offering an opening on his own service games.

During this “battle of services”, as Tsitsipas summed up in a press conference, the key was to be “able to make the first shot after the service and put the pressure on”, underlined the winner. “There’s a lot of history on these courts and you feel really proud to make your way here,” he added.

Zverev, for his part, pleaded fatigue after reaching the final in Madrid last week: “I’ve played long games here. I am not a machine, I am a human being. The second semi-final between Djokovic, who can win his 1,000th victory on the circuit, and Ruud will take place from 7:30 p.m.

Young scooter rider seriously injured in collision with car in Vlissingen: ‘It was a huge blow’ NOW

The life in ruins of Mariupol survivors

“Radical Utopia”, by Alice Carabédian, and “Africa in the future”, by Anthony Mangeon: utopia, to act today