Profile Titus Brandsma: from priest in the resistance to holy martyr | NOW

Dutch Father Titus Brandsma will be canonized by Pope Francis on Sunday, almost exactly eighty years after his death in Dachau concentration camp. Who was he and why is he canonized? A profile.

Anno Sjoerd Brandsma was born on February 23, 1881 in Ugoklooster in Bolsward (Friesland). At the age of seventeen he entered the Order of the Carmelites, a Catholic monks’ order. There he takes the name Titus. Under that name he was ordained a priest in 1905 at the age of 24. Four years later, he obtained his doctorate in philosophy in Rome.

After several years of teaching younger Carmelites, he became professor of philosophy in 1923 at the Catholic University of Nijmegen (now Radboud University), which was founded in that year. In 1932 he even became rector magnificus of the university. In the 1930s, Brandsma quickly saw the danger of advancing National Socialism, which he frequently warned against during lectures and lectures.

He also publishes many written pieces in which he strongly speaks out against Nazism, racial hatred and anti-Semitism. He will continue to do so even after the outbreak of the Second World War and the German occupation of the Netherlands. He also opposes the removal of Jewish students and teachers from schools and universities.

When the NSB wants to place advertisements in Dutch newspapers and weeklies at the end of 1941, Brandsma writes an open letter in which he calls on editors to refuse the advertisements. For that reason, he was arrested in January 1942 and imprisoned in Dachau, the infamous concentration camp for political opponents of the Nazi regime.

Despite his incarceration and the severe hardships and abuses that befall him, Brandsma writes in his diary that he has “never been so happy and content” because he still knows his God close to him. On July 26, Brandsma was killed by injection in Dachau. He is then 41 years old.

In Titus Brandsma’s hometown of Bolsward there has been a bust of the priest since 1967. His then 92-year-old sister Barbara was present at the unveiling. 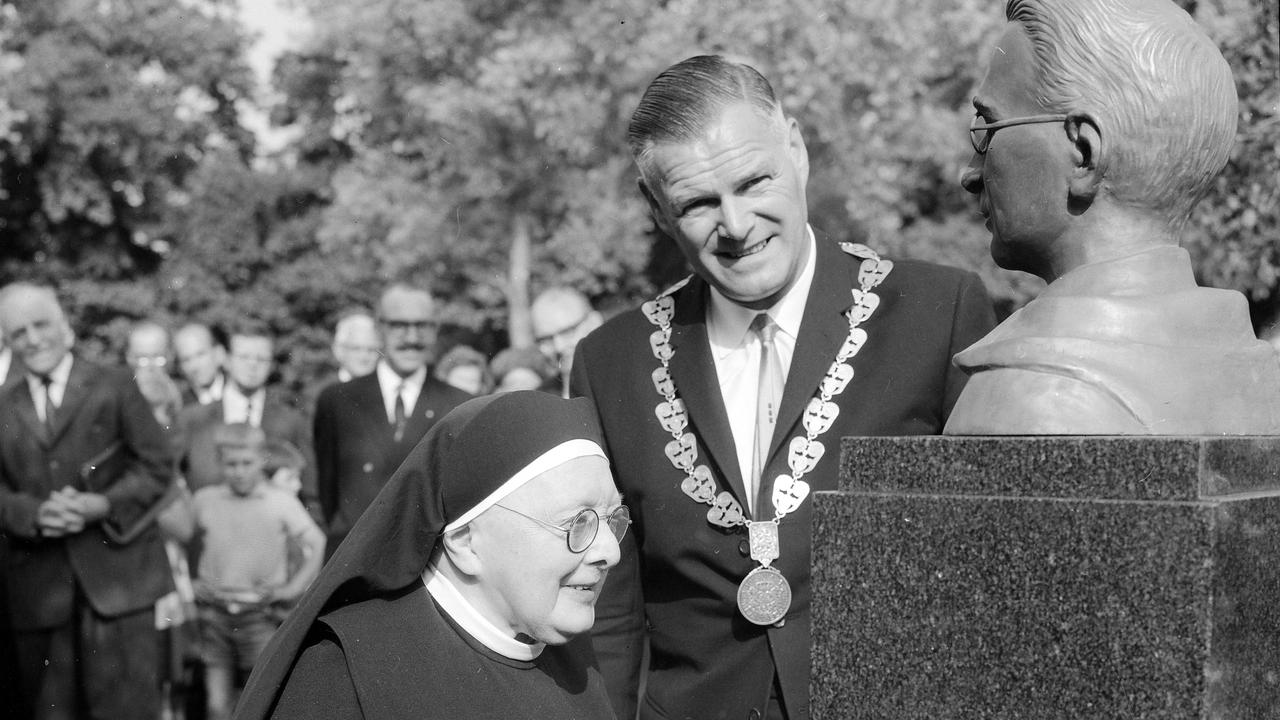 In Titus Brandsma’s hometown of Bolsward there has been a bust of the priest since 1967. His then 92-year-old sister Barbara was present at the unveiling.

After the war, Brandsma is seen as a resistance hero. In 1982, forty years after his death, he was awarded the Resistance Cross. Three years later, he was beatified by the Roman Catholic Church, as the figurehead of the ecclesiastical resistance during the Second World War. Then Pope John Paul II calls him a “martyr for the faith” and stilt that Brandsma “responded with love at a time when hatred was rampant”.

Because Brandsma resisted the National Socialist interference in the press, he is also seen by (Catholic) journalists as a champion of press freedom. Sent last week Dutch and foreign journalists write a letter to Pope Francis. In it they call for Brandsma to be named the patron saint of journalism in addition to his canonization.

Chapels, churches, schools and streets in 45 Dutch towns and numerous foreign municipalities have been named after the priest. The Titus Brandsma Memorial Church, designed by artists, is located in Nijmegen. An institute of Radboud University that studies spirituality also bears his name.

In May 2021, a special Vatican commission recognizes that Brandsma performed a miracle posthumously. An terminally ill father from the United States is said to have been cured of skin cancer after he had prayed with a piece of Brandsma’s robe on his head.

As a result of the testimony of the American father, Brandsma is eligible for canonization, which the Vatican announced in November of the same year. Brandsma is the first Dutchman to be canonized since Karel Houben in 2007. On Sunday he and nine others will be included in the canon of Catholic saints.

How does a canonization work?

Canonization is the highest possible status that the Roman Catholic Church can give to a person. First, a person is beatified. For that, that person must have performed a miracle recognized by the Church, or have died a martyr’s death. A martyr’s death means that someone has been killed specifically for their faith and does not renounce the faith despite the prospect of death. An unexplained healing is often presented as a miracle. A special committee of the Vatican is looking at whether something is recognized as a miracle. If two miracles (or a martyr’s death and a posthumous miracle) are attributed to a person, that person can be declared a saint by the Pope. A person cannot be canonized until he has died. Whoever is canonized ends up on the long list (canon) of saints of the Roman Catholic Church and can be venerated everywhere.