Planned attack in Villepinte: the conviction of the three Iranians confirmed by the Antwerp Court of Appeal 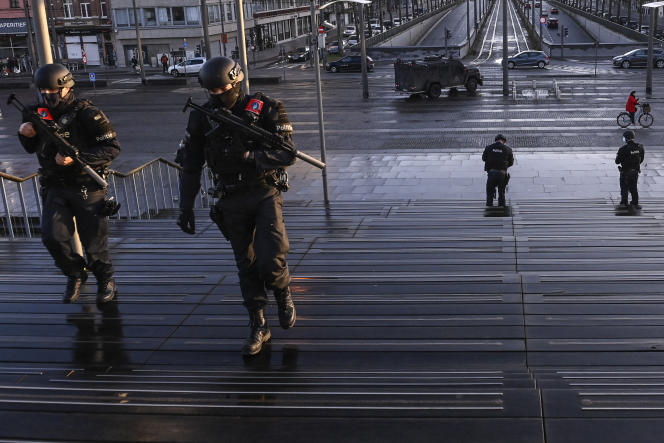 In front of the Antwerp court, where three Belgian-Iranians implicated in a planned attack in Villepinte are being tried, February 4, 2021. DIRK WAEM / AFP

The Antwerp Court of Appeal (Belgium) confirmed, on Tuesday May 10, the sentences handed down at first instance, in February 2021, against three Belgian-Iranians involved in a planned attack which aimed to detonate a bomb during a a meeting of the National Council of Resistance of Iran (NCRI) organized in France in Villepinte (Seine-Saint-Denis), in June 2018, where tens of thousands of people were expected, including many leading political figures.

The court even aggravated that of one of the three defendants, Amir Saadouni, 42, sentenced to eighteen years in prison instead of fifteen. His companion, Nasimeh Naami, 37, and an accomplice, Mehrdad Arefani, 58, received sentences of eighteen and seventeen years’ imprisonment respectively.

Another Iranian tried in Belgium, Assadolah Assadi, an adviser to the Iranian embassy in Vienna, had not appealed his sentence to the maximum sentence, twenty years of imprisonment, in first instance, by the court of Antwerp . He was, according to the Belgian judges, “the operational brain” of the planned attack.

Specialized in the surveillance of Iranian opponents abroad, Assadi had been trained in the use of explosives and had engaged in a tracking operation in France in the company of a mullah known to be close to Supreme Leader Ali Khamenei. He had, in Luxembourg, given the bomb to his accomplices, members, like him, of a sub-section of the Iranian Ministry of Intelligence and Security (MOIS). The Belgian judges designated this structure (the “312 department”) as the organizer of the project, without however affirming that the Iranian State was directly involved in this terrorist action. The NCRI, on the other hand, claims that the mission of the quartet had been approved by the Supreme Leader and the President of the Iranian Republic.

The Saadouni-Naami couple had been arrested in Brussels on their way to France. Mr. Arefani had himself been apprehended in Villepinte, where he had to guide the bombers, while Mr. Assadi was intercepted by the German police when he was trying to return to Austria. Absent from all the hearings in Antwerp, he invoked his diplomatic immunity. At the end of his conviction in 2021, the spokesperson for Iranian diplomacy denounced an “illegal” procedure. On Tuesday, Mr. Assadi’s release was again demanded by Tehran.

The judgment of the Antwerp Court of Appeal is cause for concern for the family of Ahmad Reza Jalali, a professor at the Flemish Free University of Brussels (VUB), arrested in 2016 during a mission he was carrying out in Iran. This Iranian-Swedish man was convicted of spying for Israel and sentenced to death. According to several sources, the fate of the academic, whose conviction was confirmed on May 4 in Tehran, risked being linked to the decision of the Belgian justice.

You have 45.27% of this article left to read. The following is for subscribers only.