Marijuana: Olga Sánchez Cordero clarifies that cannabis is not yet legal in Mexico

The president of the Senate of the Republic, Olga Sánchez Cordero, welcomed the decision of the Supreme Court of Justice of the Nation to declare unconstitutional the criminalization of possession for personal use or consumption of marijuana, but he clarified that “the sentence does not imply the legalization of the use of cannabis sativa”.

In a message posted on social media, the senator stated that this determination marks “the path that we must follow in the Senate of the Republic.” 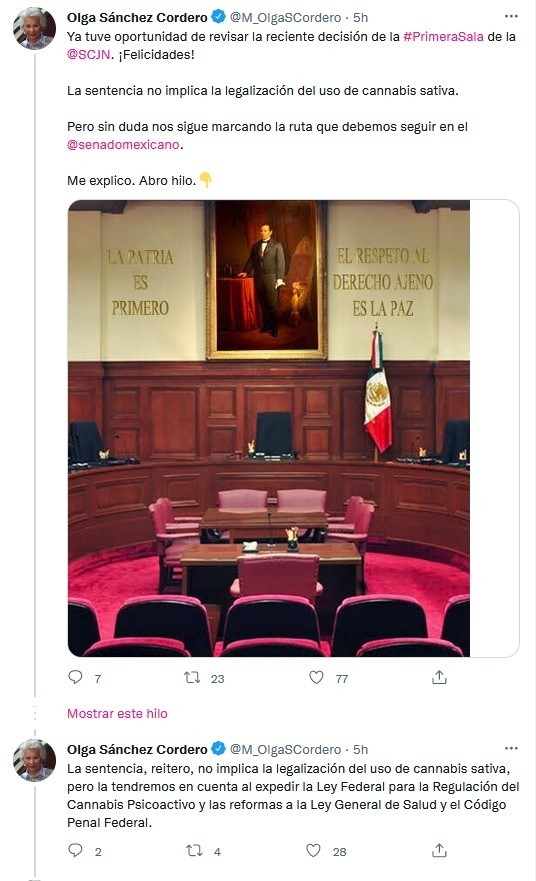 He recalled that recently, a person was arrested for simple possession of cannabis sativa and claimed to be a consumer, so considering that his rights had been violated by an unconstitutional aspect of the rule, he requested an injunction that was denied by a federal judge.

The affected party, the senator added, sought a review of the case in the Supreme Court of Justice of the Nation, which considered that the possession of five grams it does not cover the needs of the consumer and affects “unjustifiably and unreasonably the rights of health and personal integrity, privacy and free development of the personality”.

In that ruling, Sánchez Cordero explained, it was determined that the legal basis for the detention in that case was not adequate, since “criminal regulations do not allow the use or consumption of cannabis sativa for personal use to be recognized.”

The sentence, he reiterated, “does not imply the legalization of the use of cannabis sativa, but we will take it into account when issuing the Federal Law for the Regulation of Psychoactive Cannabis and the reforms to the General Health Law and the Federal Penal Code,” he explained.

“The Senate of the Republic works to improve the regulation of cannabis, safeguard constitutional rights and promote conditions for the industrial use of raw materials such as hemp. I hope that we will soon have results,” said Sánchez Cordero in the message.