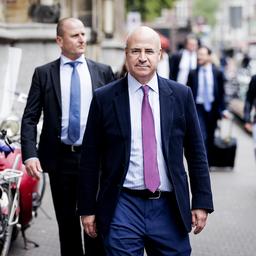 Former businessman and human rights activist Bill Browder believes that lawyers, tax advisers and accountants who have assisted Russian oligarchs should be forced to share their knowledge with Dutch authorities. “The Dutch government can do much more than is happening now. Your Prime Minister Rutte has given priority to business relations with Russia for far too long,” the Briton told NU.nl.

Who is Bill Browser?

Browder is one of the fiercest critics of Russian President Vladimir Putin. In 1996, he founded Hermitage Capital Management, the largest foreign investment fund in Russia of all time. After Browder criticized corruption in Russia in 2006, the Russian government placed the Briton on a blacklist. Browder accuses Putin of pocketing money on a large scale. He has been calling for strict sanctions against people guilty of corrupt practices for 12 years. Those sanctions laws bear the name of Sergei Magnitsky, his former employee, who was on the trail of a major corruption scandal. On November 16, 2009, he was murdered in a Russian cell after severe torture. Then-US President Barack Obama signed the Magnitsky Act, a US law full of measures against high-ranking Russians involved in corruption.

Bill Browder is incredibly excited about the reticent attitude of the Dutch government and Prime Minister Mark Rutte in particular when it comes to sanctions against the clique around Russian President Vladimir Putin. “The Russians shot a plane out of the sky with 189 Dutch people in it. That was your 9/11 moment,” he says. “And what did Rutte do? He prevents the introduction of sanctions, gas interests were more important. He did not go to Brussels to promote such a law.”

He is also not impressed by the report by former minister Stef Blok on the sanction options that appeared on Friday. “Now 600 million euros have been seized. I can tell you that there is much more Russian money in the Netherlands.”

Browder focuses on the lawyers, tax experts and accountants in the Amsterdam Zuidas, who have assisted the Russian oligarchs and the Kremlin for years.

“The Dutch government must force those experts to make all their knowledge available, to tell where the money is hidden. And if they do not cooperate, they must be punished. Blok is now plucking the low hanging fruit, he has to dig deeper.”

Browder is in the Netherlands to promote his new book Haunted by the State Mafia, which came out last week and immediately topped the non-fiction bestseller list. “This book reads like a thriller by John le Carré,” said a reviewer from NRC Handelsblad this week.

Browder’s life changed completely after the murder of his associate Sergei Magnitsky on November 16, 2009. “Sergei was a heroic figure,” says Browder. “He was on the trail of a major fraud case. He was arrested, spent 11 months in jail and did not give in even though he was tortured.”

Browder was consumed with guilt. “Magnitsky worked for me. If he hadn’t done that, he would still be alive,” he says during a conversation in Amsterdam.

When Magnitsky dies after being tortured in a Russian cell in November 2009, Browder makes a solemn promise to himself and to Magnitsky’s wife and son to put the perpetrators behind bars.

Browder, until then a successful businessman and owner of Hermitage Capital Investment, quits his business and becomes what he calls a full-time human rights activist. For the past ten years, he has been warning the West about Putin, who he says is only out to secure his stolen billions.

Browder paid a heavy price for his struggle

Through Browder’s relentless struggle, countries like Canada and the United States enacted the so-called Magnitsky Act. Under those laws, sanctions can be imposed on people who commit human rights violations or corrupt practices.

Previously, sanctions could only be imposed on entire countries. The Magnitsky laws made it possible to personally target the perpetrators without an entire population suffering the punitive measures.

The former businessman paid a high price for his fight against the Kremlin. Magnitsky was murdered, as was the Russian opposition politician Boris Nemtsov, with whom Browder worked closely. Browder himself was also threatened. In addition, he was wanted by Interpol at the request of Russia and even arrested in Spain, as he describes in his book.

‘It’s more dangerous for me now than ever’

“Since the Russian invasion of Ukraine, it is more dangerous for me than ever,” he says. “Any inhibition that the Russian secret service may have had before is now gone. The only advantage is that the assassins working for Putin are now so busy killing opponents that they may be overworked.”

In the Netherlands, Browder worked closely with MPs Pieter Omtzigt and Sjoerd Sjoerdsma. “They have been really committed from the beginning to implement the Magnitsky law in Europe.”

Browder, on the other hand, strongly criticizes Prime Minister Rutte, who opposed the introduction of such a law in the House. “I find it unbelievable that Rutte did that. And why? Because he was afraid of damaging business relations with Russia. Unbelievable, this was after MH17 was brought down.”

According to Browder, Rutte should have stepped forward and promoted the Magnitsky law in Europe. “He was welcomed with open arms, especially the Dutch prime minister, but he didn’t do it.” European legislation was finally passed in December 2020, thanks in part to the efforts of Omtzigt, Sjoerdsma and others.

European law passed, but does not bear Magnitsky’s name

During this period, Browder also spoke with the then Minister of Foreign Affairs Stef Blok, who had to champion the introduction of the law on behalf of the Netherlands. Blok was called upon to do so in a motion passed by the House. Browder: “Blok told me to moderate my tone, otherwise countries like Hungary wouldn’t come on board. But what was that nonsense? I moderate my tone? I’m not thinking about it.”

The European law was eventually passed, but it does not bear the name Magnitsky, because Hungary has given up on it. Also, under the law, only human rights abusers can be sanctioned and not people who are guilty of corruption.

“I find it unheard of that the EU and Blok have turned their ears to Hungary,” says Browder. “Now is the time to change the law. After the invasion of Ukraine, everyone will see what Russia and Putin are capable of. I hope that we can now anchor the law for the next 50 years.”

And then there is something else where Browder hopes that the Netherlands will take steps quickly: putting Magnitsky’s killers on the sanctions list. “How is it possible that your government hasn’t already done that? Are they still afraid of offending Putin?”

Summit of the Americas: Dialogue with the United States was on “good terms,” ​​says Ebrard

Dolphins recognize their friends by the taste of their urine