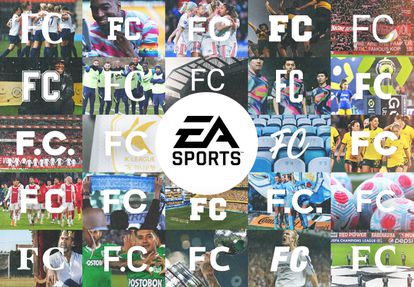 For millions of people, to think of “FIFA” is not to think of the body that governs soccer, but of the Electronic Arts video game with that name 30 years ago. To distinguish the two things you had to look at the article, “FIFA” or “FIFA”, but that annoyance ends. Their agreement has been broken and from 2023 the game will be called ‘EA Sports FC’. The soccer simulator loses its name, but who comes off worse off?

Go ahead, I am one of those who think of the game when I hear the acronym. I played the first version as a child, on a Mega Drive, and I don’t remember if it was also on a Mega CD, which would be worthwhile, and this fall I hope to play FIFA 2023. Along the way, 30 years vanish, in another reminder that video games They already have their own story.

FIFA has become a phenomenon. It is one of the ten best-selling franchises ever, along with universal brands such as Mario, Tetris, Pokémon or Minecraft. In 2021 it sold 30 million units and their community has 150 million players. It is the star game of Electronic Arts, which is the sixth largest distributor in the world, with annual revenues of around 5,500 million dollars —as a reference, it earns half that of Seat (9,200) and a fifth of Mercadona (25,000) , although it generates four times more benefits than the first and a little more than the second.

The success of FIFA is underpinned by its online mode, Ultimate Team, where players compete against each other managing a squad with real footballers that they get during the season, as if they were trading cards. It is a community of forums, appstutorials and youtubers Famous. Also a business. It’s a way pay-to-win (pay to win), because you can use real money to buy controversial packs that hopefully get you an Mbappé. Nearly a third of EA’s revenue comes from in-game payments, which is a potential Metaverse-type source.

What happened now? The agreement between EA and FIFA has been broken. Electronic Arts was paying 150 million a year to use the World Cup brands and the happy acronyms, but now FIFA was asking for double the money. In addition, it did not want to cede exclusively certain digital rights, more valuable every day, according to The New York Times. In EA they have thought that their name is not worth that much, or that it is a weakness not to have it and that they can afford the change, and although I cannot judge the economic amounts, I think they are right.

The key is that EA does not lose anything essential. They keep the three fundamental pieces of FIFA: technology and knowledge to make the best possible game, a huge community of players, and the most delicate thing, the rights to include real footballers.

It’s nice to be able to play on your console with Manchester City and FC Barcelona, ​​but the most important thing is the athletes. Manage a doll that looks like Benzema, Salah or Canales, not only in its appearance, but also in its movements and abilities. When you play FIFA, controlling the French striker feels different than playing Vinicius, who is lightning fast and a good dribbler, but doesn’t have his shot, or his vision. Playing with authentic footballers, and that they are different from each other, is a unique attraction of the franchise. At EA they know it and that’s why they have it tied. They say goodbye to the initials of FIFA, but leave signed hundreds of license agreements with clubs, leagues and competitions, and even with historic players, so you can handle Henry or Butrageño. 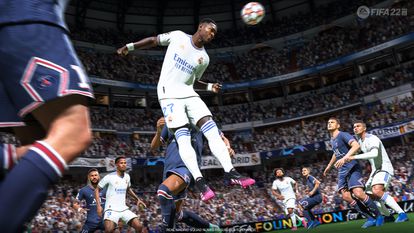 An image of FIFA 22 Electronic Arts

EA’s show of force was felt the day it announced the termination of the agreement with FIFA. They came out to say that the main leagues and the best clubs in the world were still with the company. It was done by the Premier League (“EA Sports is a valuable and long-term partner”), the Spanish La Liga (“We are committed to partnering with EA”) or UEFA (“we want to continue our relationship”). And dozens of clubs did it, like Madrid, Atlético, PSG o Citywho tweeted almost in unison: “We are in The Club #EASPORTSFC”.

FIFA’s reaction was less spectacular. Its president, Gianni Infantino, announced that they will develop another football simulator to compete with EA. But he expressed himself with a confidence that had the opposite effect on me: skepticism. “The only real, authentic game bearing the FIFA name will be the best available to gamers and fans. The FIFA name is the only global and original title. FIFA 23, FIFA 24, FIFA 25 […] the constant is the name of FIFA and it will remain forever and will continue to be the best”. It is as if Infantino believed that his initials are a spell that will make a great video game, denying the complexity of a competitive, sophisticated and expensive industry. Hundreds of people appear in the FIFA 2022 credits.

In summary, I believe that EA will change the name of FIFA painlessly and that ‘EA Sports FC’ will continue to be a success. At the same time, FIFA may also earn more money. They think that exclusivity limited their options, they want to “diversify” and bring more games to the market, in the plural, which could well increase their profits, at least initially, taking advantage of the fact that the FIFA brand has been associated with a good game for 30 years. It is a reality that poses a paradox: who announced to whom?