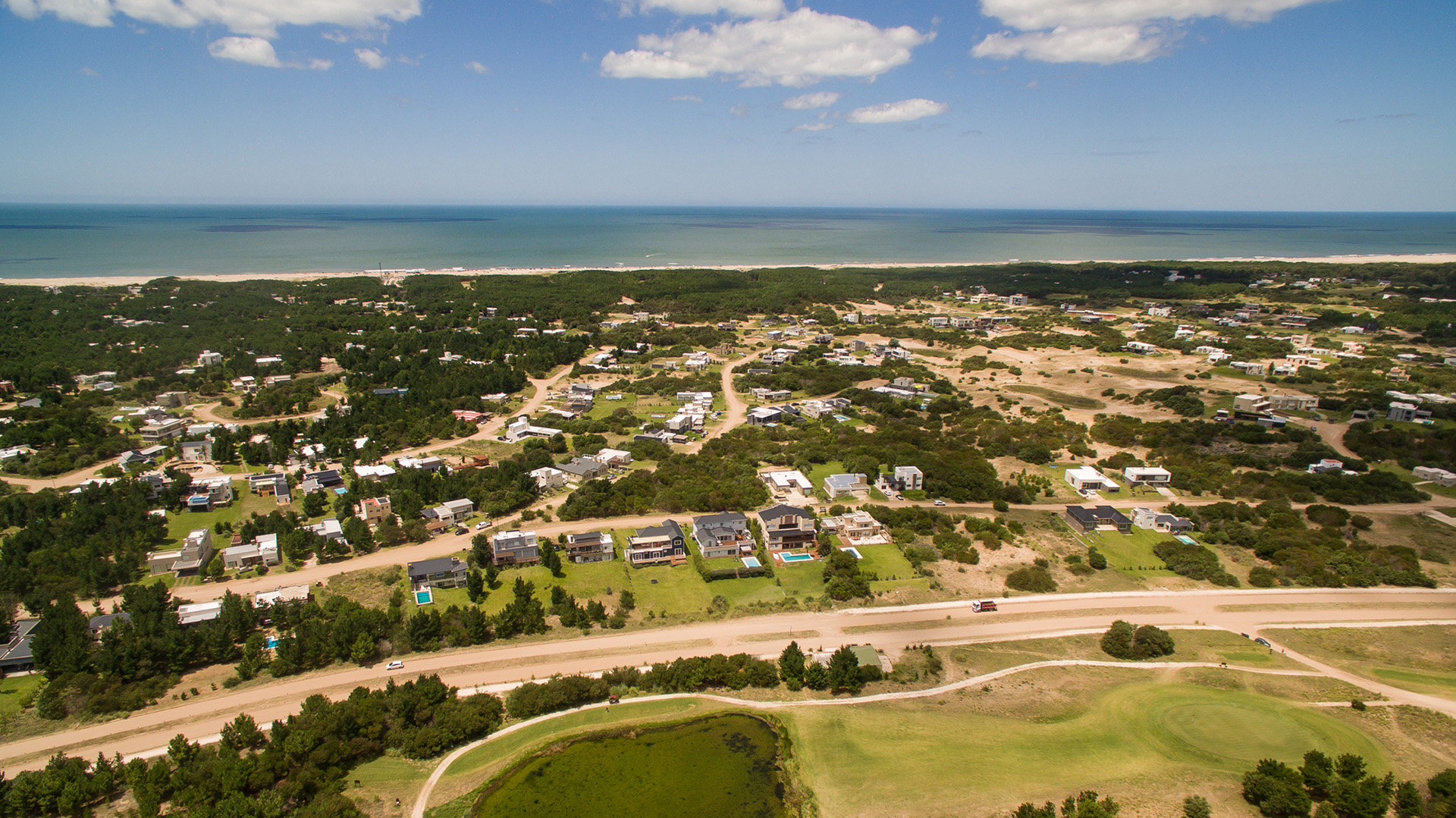 Costa Esmeralda, the exclusive gated community located on the beach on the border of La Costa with Pinamar, could change forever: the firm that manages the gated community complex is carrying out a real estate megaproject that provides for the construction of more than 100 buildings very close to the sea, which could cause -according to neighbors- an environmental disaster. Therefore, during the morning the owners will hold a protest in front of the management company.

The investment generates great concern in many of the residents of the neighborhood, particularly due to the deforestation that is already taking place in the 106-hectare property where the new buildings would be built. But it is not the only thing. According to the complainants, the buildings will house some 4,000 apartments for some 15,000 new inhabitants. That is to say, it will also lose its exclusivity and with a landscape completely alien to the marine farms that currently make it up, since, they maintain, they would be buildings with at least four floors each. 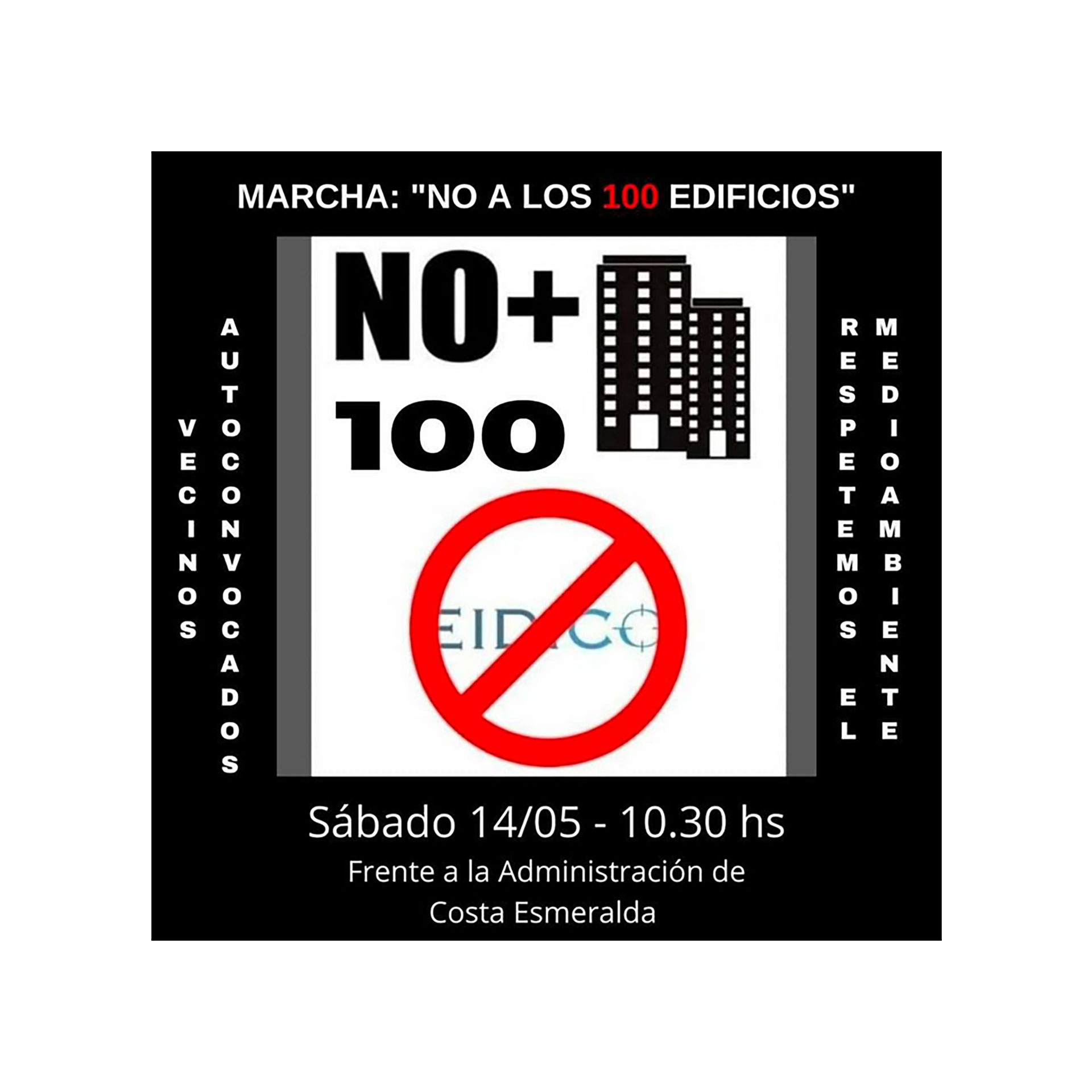 The call to protest in front of EIDICO

The new complex, called the Costa Esmeralda Urban Center (CUCE), would be practically a new city that would be made up not only of apartments, but also of hotels, service stations and shopping malls.

“We need Greenpeace to give us visibility in order to save our forest and add more wills in this regard. They want us to build 100 buildings there, this was announced at the end of April 2022 by the EIDICO developer. To do this, they will clear the forest and affect the entire duniferous area with its terrible consequences”, say the neighbors in a request for signatures to prevent construction. In addition to EIDICO, Fiduciaria de la Costa SA and the Costa Esmeralda Civil, Social and Sports Association participate in the project. They estimate an investment of between 800 and 1 billion dollars. 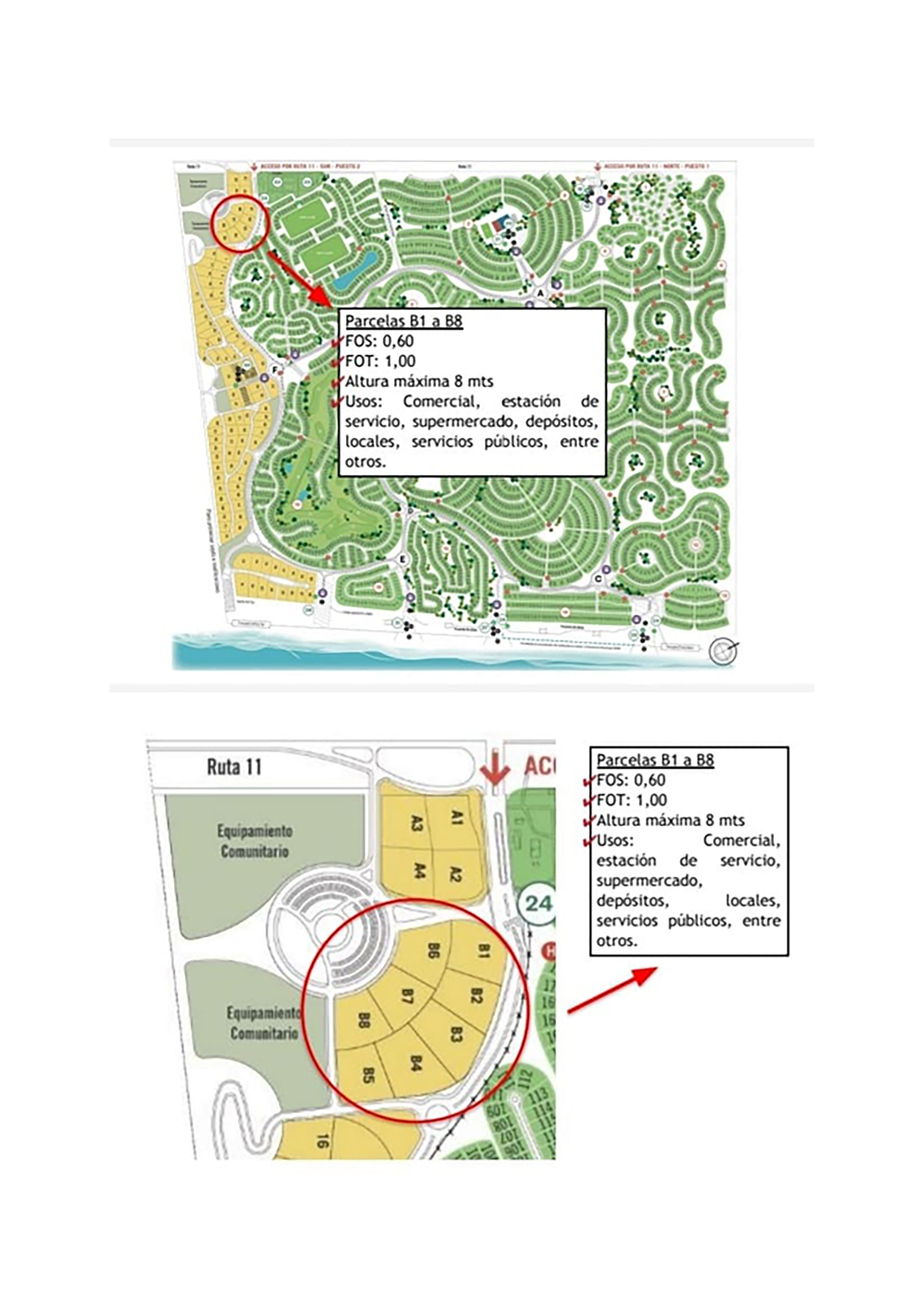 The location of the work on the map

“The forest and the coastal area of ​​the Costa Esmeralda are the habitat of many species, there is no infrastructure in the area, the aquifers are insufficient and they are highly affected. The construction of the 100 buildings that Eidico has announced will be a disaster”, the neighbors added.

The project announced by the manager of EIDICO, Santiago Valledor, in April, aroused great rejection among homeowners and even led to a presentation before the Justice. The councilor of the Partido de la Costa, Evangelina Cardone (of Together for Change), and two lawyers filed an injunction and requested a precautionary measure in a Contentious and Administrative Court of Dolores for the administration to stop the movement of sand, the felling of trees and works. In addition, the owners of the houses presented a letter with all the signatures of those who oppose the project. 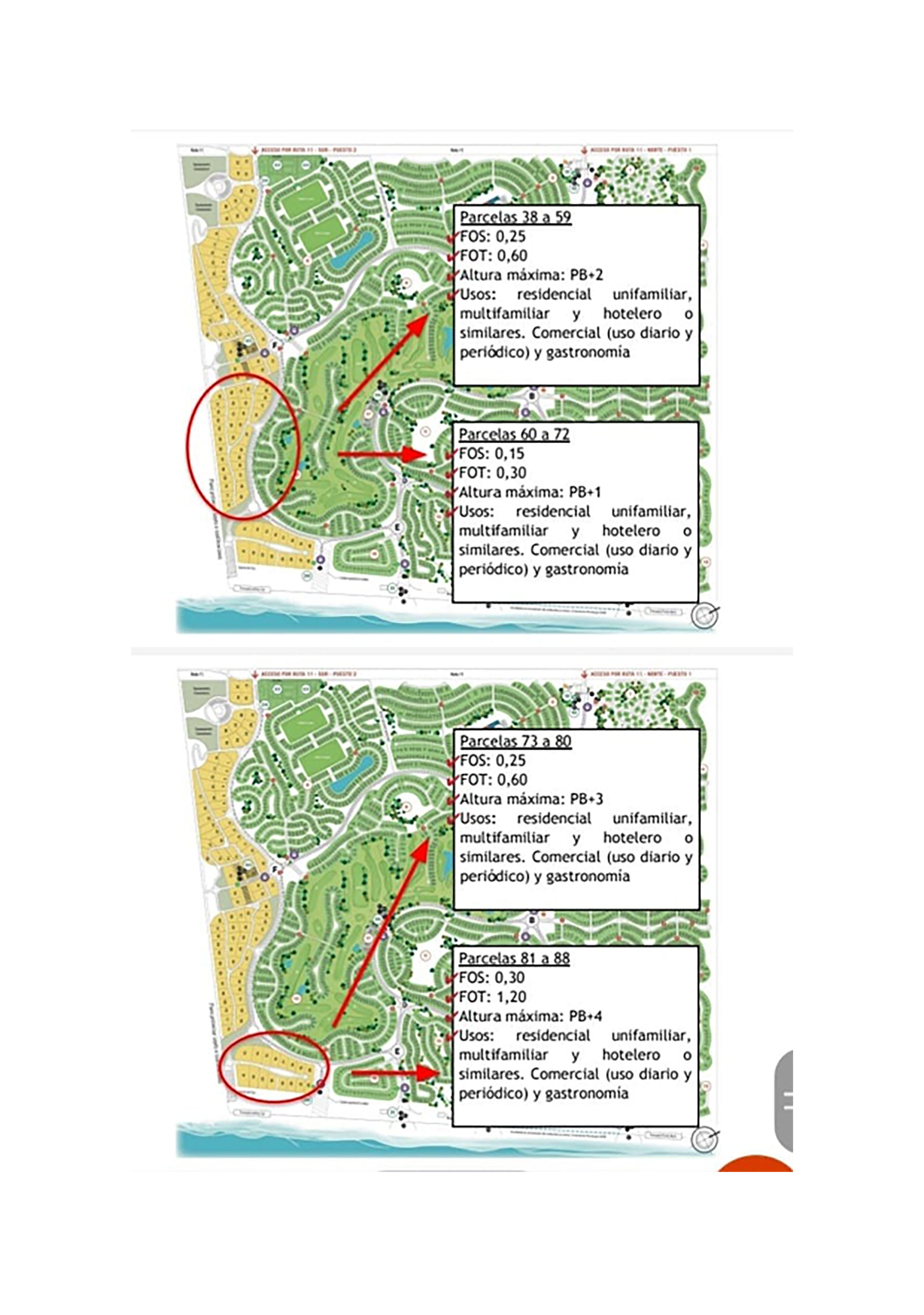 “We are supposed to have come to Costa Esmeralda to see the forest on the beach, what we least want is to have a concrete jungle next to us,” said Sergio Bonzo, one of the lawyers who presented the protection, in dialogue with the newspaper All Provincial. At the end of 2019, EIDICO created a shopping center in the southern area, for now the only space open to the public that is fully operational. If the project advances, the number of people would grow exponentially.

“It would be a disaster in environmental terms because 100 buildings would collapse the aquifers, the groundwater and the rest of the services, in addition to the flora and fauna that would be greatly affected,” warned Bonzo, who also said that another reason for the resistance neighborhood is the inevitable influx of a large number of people during the summer seasons.

“The beach would be completely overcrowded, there would be no possibility of putting up an umbrella. This is a totally out of place mega project in a neighborhood chosen by people seeking contact with nature. Whoever bought here did not know what was going to become a concrete jungle or a city like San Bernardo, with buildings that block sunlight on the beach. It would be disastrous,” said the lawyer, who is also a homeowner in the country. 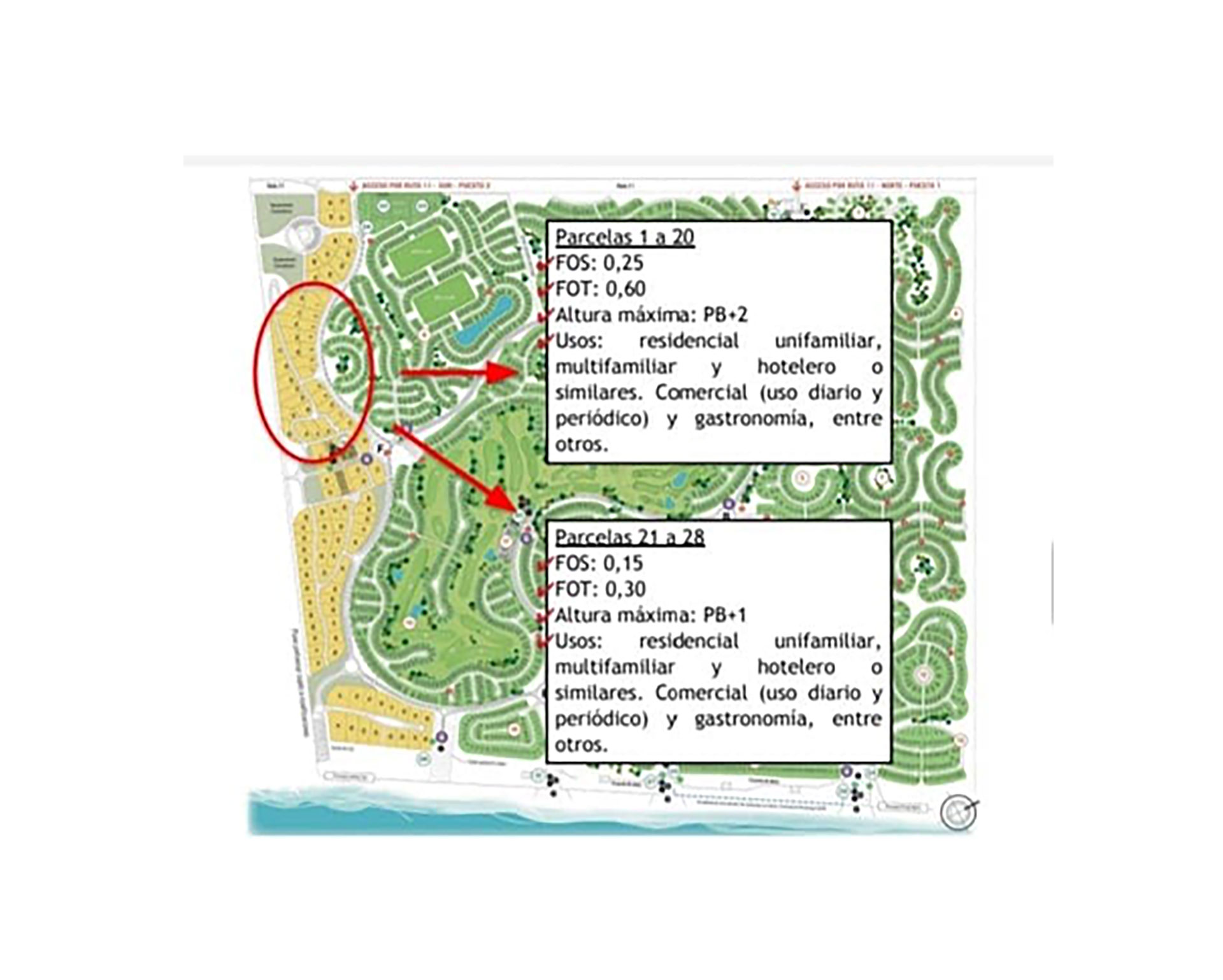 Costa Esmeralda is a private gated community with access to the sea that has 15 neighborhoods inside, 3,860 lots, 1,543 houses completed and another 81 under construction, in addition to another 105 apartments in the condominium called Algolf 19. It offers visitors 3 coastal inns , 27-hole golf course, golf club house, sports club house, 12 tennis courts -and another 3 to be built-, soccer, volleyball, paddle and even polo fields, with palenques and corrals.

Within its facilities, it has 3 parking lots near the beach and a bus service called “costabus” that runs through the internal streets of the neighborhoods and ends its route at the coastal accesses. There are also 5 gastronomic establishments, three of them on the beach, a chapel, a health center, recycling points, emergency hydrants in case of fire and lifeguards during the summer season.

The owners of the Costa Esmeralda homes assure that there would be a “break in the chain of dunes”, although the CUCE -according to the project- would be built at the same distance from the sea as the gated community itself. 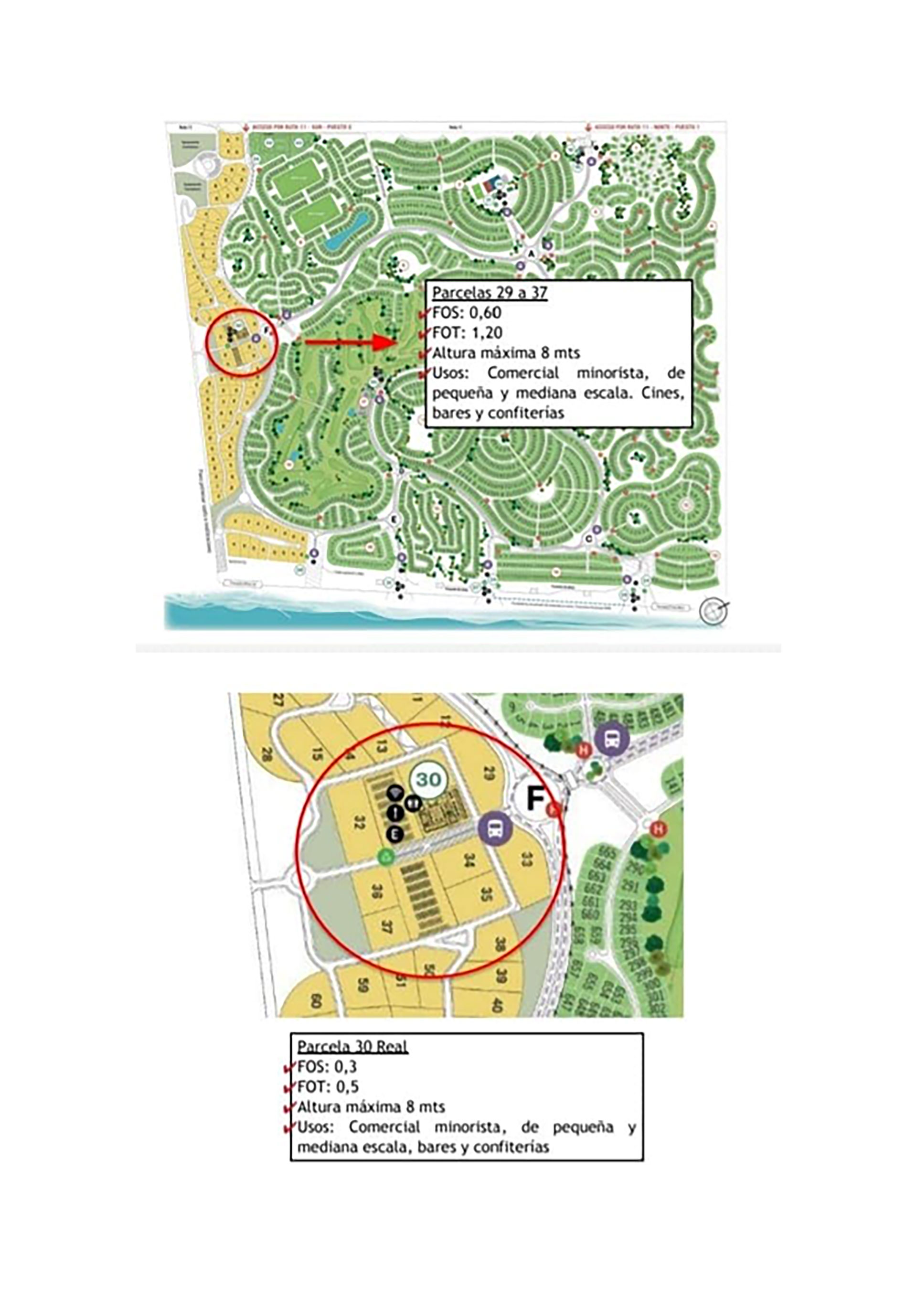 The project foresees the construction of 100 buildings

“In La Costa there is a legal discussion about whether it is appropriate to take the riverbank line or from where the chain of dunes begins to build. If we take from the coast to the first houses of the neighborhood they exceed 150 meters but if we take it from the dunes we are less than that distance. The buildings would be built on the same line but because of the foundations they need, they would generate much greater damage,” added the lawyer, who also argued that with the increase in the occupation of the beaches, the properties would be devalued.

The project foresees the construction of buildings from a strip that begins on the beach line with 500 meters of frontage and extends for three kilometers reaching Route 11. Those hectares were subdivided into 100 multi-family macro lots that can include up to one building and half each.

For now, the judge who intervened in the amparo requested as a first measure that the Municipality of La Costa present a file that provides answers to several queries from the neighbors.

For example, details of the modifications of the land and the constructions, as well as knowing if an administrative act was issued authorizing the start of the works, if there is an environmental impact study and if there are administrative actions for which the environmental procedure was carried out. , published the newspaper 0223. In addition, in the amparo it maintains that the company bases the development on the same environmental study that was done when the neighborhood was built in 2004. That is, they consider that it was outdated.

“No to 100 buildings”, is the motto of the mobilization that took place today in front of EIDICO.

Infobae accessed a document that details the specifications of the undertaking and in which they assure that they respect all the environmental requirements demanded by the Law. “It is a progressive development over time, estimated in 10 to 20 years, with a low population density, respecting urban indicators and approved environmental impact study, taking additional precautions for the care of the environment”, he indicates.

In that sense, he explained that the project -which corresponds to the second stage of the entire development- “has the technical approval and presentations in private Works of the Municipality granting the permits for its start”. That is why they clarify that “this extension seeks to respond to the needs of owners, tenants and visitors who chose Costa Esmeralda as a place of summer or residence.”

According to the document, the development of about 100 hectares is contemplated – which corresponds to only 10% of the total area of ​​Costa Esmeralda – of which only about 58 are distributed in about 100 plots with different destinations such as “multi-family homes, cabin complex, hotel, shopping mall, gastronomy, supermarket, school, etc.” The plan also foresees green, circulatory, common areas both for recreation and for community facilities.

“The contracts from the first stage of development contemplate that the master plan considers these areas. At the level of approvals and authorizations, the Costa Esmeralda Master Plan, approved by the Municipality -both by the Intendancy and the Deliberative Council- already contemplates the zones, macro-lots and the urban indicators that determine what can and cannot be done, in relation to construction and uses.

Among other considerations, the firm clarifies that “the afforestation is not native and was planted artificially by the owners of the land many years ago for future development”, as the authorities demanded at that time. “Additionally, we understand and support the importance of preserving the first line of dunes,” they added.

“The project is designed on the basis of conserving the highest percentage of the current topography, in which the priority is to promote environmentally friendly construction and efficient use of energy resources”

Finally, on the environmental issue, they explained: “It must be taken into account that a sustainable project is one that materializes and allows a technically feasible, economically viable and environmentally balanced use of the resource and that allows reasonable coexistence in the community, in this sense constructions of multi-family dwellings can have less impact since they allow the same use with less “footprint” on the ground, while limiting their height to a maximum of 15 meters they are protected from the height of trees of a certain size” .