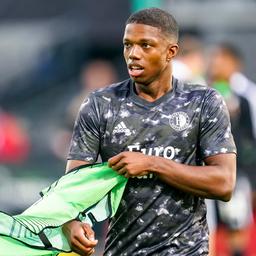 Trainer Arne Slot expects Tyrell Malacia to be fit in time for the final of the Conference League. The left back was uncertain for the final battle with AS Roma due to a hamstring injury, according to Feyenoord.

“We have all expectations and good hopes that he will train again next week and be available for the final,” Slot said on Friday at his press conference prior to the last Eredivisie match with FC Twente. “I wouldn’t use the word worrying.”

Malacia will in any case be missing on Sunday, when Feyenoord closes the Eredivisie season at home against FC Twente. The Rotterdammers are already certain of the third place behind Ajax and PSV. The Conference League final against AS Roma will be played on Wednesday 25 May in the Albanian capital Tirana.

This means the fullback has 12 days left to recover from his injury and make it to the historic game. Feyenoord is in a European final for the first time in twenty years.

Malacia is one of the defining players at Feyenoord this season. The born Rotterdammer came under coach Arne Slot to 48 games in all competitions, in which he scored one goal and gave five assists.

His good performances already led to a debut in the Dutch national team in September last year. Meanwhile, the counter for Malacia, who again belonged to the pre-selection on Friday, is at three international matches.

Narco mystery in Bahía Blanca: an abandoned boat and more than 140 kilos of cocaine floating in front of a Navy base