Ukraine reported further damage to a Russian ship in the Black Sea. The authorities reported that the icebreaker “Vsevolod Bobrov” was heading to the island of Serpents, and had to be towed to Sevastopol

International support for kyiv continues to support the defense of its territory against Kremlin troops. Allied countries announced new contributions of resources to support the work of the Army.

Russia increases international tension with threats to Finland for its decision to join NATO “without delay”.

Here is the minute-by-minute of Russia’s invasion of Ukraine (Ukrainian time, GMT+3):

6:40: Ukrainian Foreign Minister Dimitro Kuleba denounced that a Russian ship carrying stolen Ukrainian grain docked off the Syrian coast on May 11 to sell merchandise to the Syrian authorities.

“Russia committed a triple crime: it bombed Syria, it temporarily occupied a part of Ukraine, and it is currently selling Ukrainian grain that it stole from Syria there. I would like to remind everyone involved in this shady business that theft has never brought anyone down,” he said in a statement.

Thus, he pointed out that “any person who participates in the sale, transport or purchase of stolen grain is an accomplice of this crime.” “Your conduct of his will have the appropriate legal consequences on a global scale,” he added.

5:53: President of Ukraine Volodimir Zelensky claimed that since the Russian invasion of the country began, Russian troops have destroyed at least 570 health facilities and 101 hospitals have been completely destroyed.

“What is? This makes no sense”, said the Ukrainian president, assuring that during the night of this Thursday they have attacked schools in the Chernigov region, as well as residential buildings in the Zaporizhzhia region and attacks have also been registered in Poltava and Kremenchuk.

“Russia’s strategic defeat is already obvious to everyone in the world and even to those who still continue to communicate with them. Russia simply lacks the courage to admit it so far. They are cowards. And they are trying to hide the truth behind the missile, air and artillery attacks,” she has pointed out. 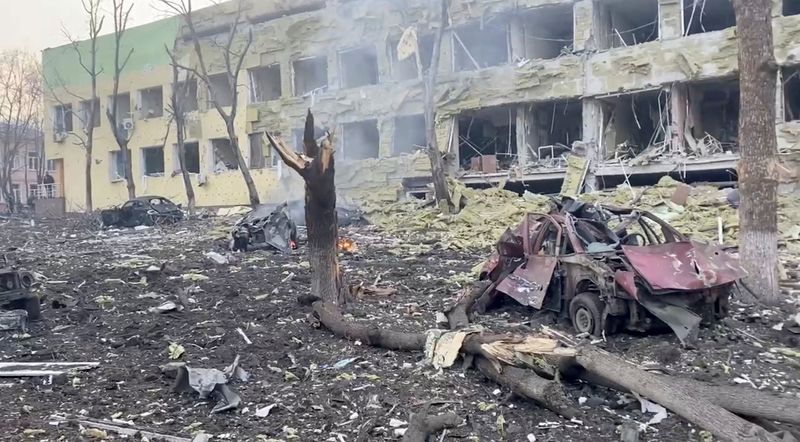 5:16: Ukraine assured that the special evacuation operation of the Azovstal steel plant, in the besieged city of Mariupol, will begin with the rescue of seriously wounded soldiers and will be carried out in several stages.

“We have started a new round of talks on the special operation roadmap. We’ll start with the seriously injured. The Red Cross and the UN have met with the Russians and have agreed on a series of negotiations,” said Ukraine’s Deputy Prime Minister Irina Vereschuk.

Thus, he explained that the Ukrainian authorities want to promote the signing of a document detailing “exactly how the evacuation of the Azovstal steelworks will be carried out.” “We are preparing to sign it,” he said, as reported by the news agency UKrinform.

4:00: Hundreds of Russian soldiers refuse to be sent to war, despite threats of imprisonment for refusing to take part in the fighting in Ukraine.

As reported The Guardian, more than a hundred Kremlin soldiers have contacted lawyer Mikhail Benyash and his team, “for advice on how they could avoid being sent to fight. Among them were 12 members of the National Guard from the city of Krasnodar, in southern Russia, who were fired after refusing to go to Ukraine.

According to Benyash, Russian military rules state that troops who refuse to fight in Ukraine can be fired but not prosecuted. This is because the Kremlin has decided to classify the invasion of the neighboring country as a “special operation” and not as a war.

According to the testimony of one of the officials, the commanders “were furious. But eventually they calmed down because there wasn’t much they could do.” 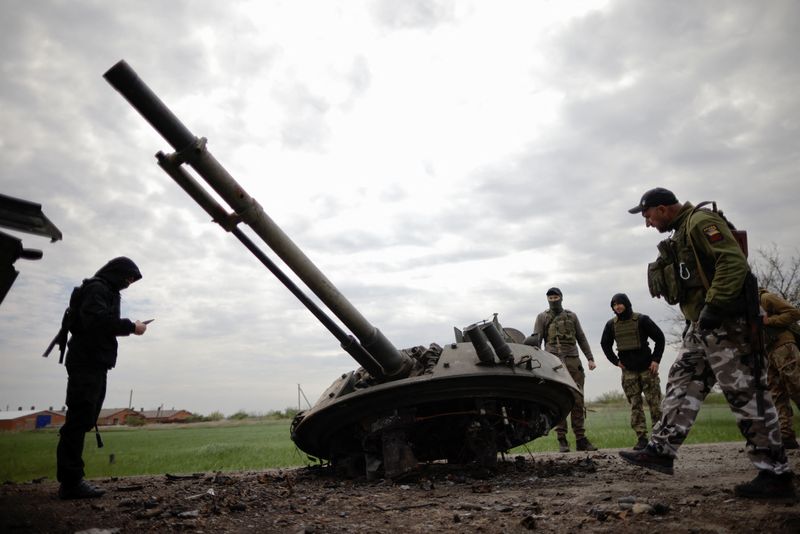 03:24: The Ukrainian authorities and witnesses consulted by the AFP Russian forces were accused on Thursday of firing a tank at a house in a town near Kharkiv in eastern Ukraine, killing several civilians.

According to the prosecutor’s office in this region bordering Russia, the events occurred on March 27 in the town of Stepanki, then occupied by Russian forces, and later recovered by Ukraine.

“The (Russian) military fired on a residential house with a tank. Two men and a woman died, ”he reported in a statement, in which he specifies that their bodies, buried by neighbors in the patio of the house, were exhumed on Wednesday.

02:30: The European Commission has proposed helping Ukraine export its wheat and other grains by rail, road and waterway to get around a Russian blockade of Black Sea ports, which prevents these critical supplies from reaching at-risk parts of the world. of food insecurity.

The European Union’s executive arm said the plan aims to establish alternative routes and ease congestion across borders, which should also make it easier for humanitarian aid and other goods to enter the war-torn country. 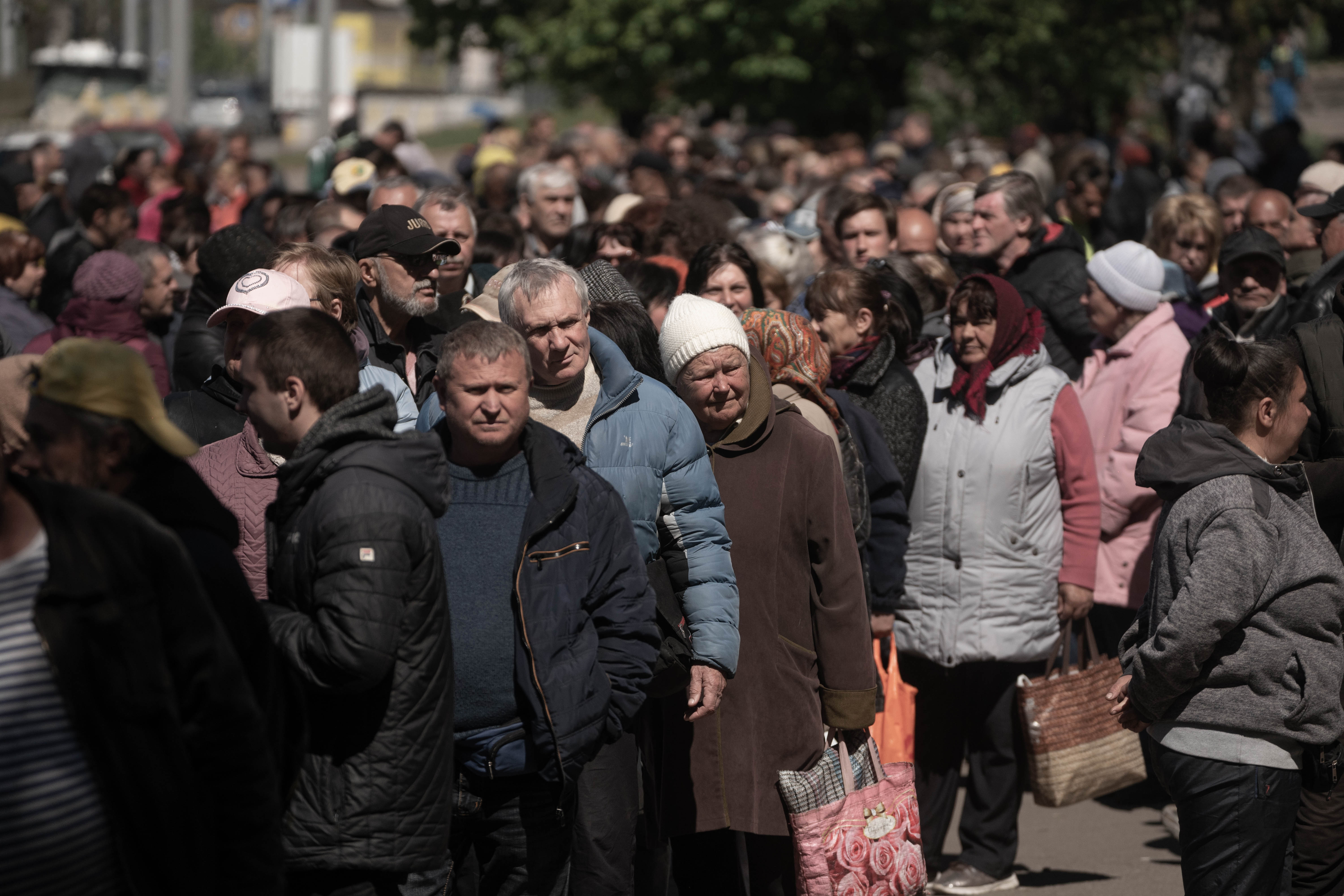 Civilians must go to aid centers to find food in the most attacked cities (Photo: Franco Fafasuli)

The Russian invasion of Ukraine has caused disruptions in global food supplies, as both countries are two of the largest exporters of wheat, barley and sunflower oil. The blockade of Ukrainian ports has been particularly damaging, since before the war they accounted for 90% of grain and oilseed exports.

01:42: The Ukrainian military authorities have reported this Thursday that a new Russian ship, the ‘Vsevolod Bobrov’, is on fire in the waters of the Black Sea.

This has been announced by the spokesman for the military administration of Odessa, Sergei Bratchuk, has detailed on his Telegram channel that the ship is damaged and a fire has broken out on it.

“Thanks to the actions of our Army, the logistics support ship ‘Vsevolod Bobrov’ caught fire. One of the newest in the Russian fleet. They say he is ‘moving’ towards Sebastopol,” Bratchuk said.

00:56: The Government of Spain has so far sent 21 million euros in weapons to Ukraine, within the framework of the European Peace Mechanism with which the countries of the European Union pay for the shipment of military material to kyiv in full aggression Russian.

Since the beginning of the invasion, the EU has enabled this fund for the first time to send lethal weapons to a country in conflict, an unprecedented step that was approved a few days after the war began, saving the position of Germany, Austria or the Nordics , initially reluctant to send weapons to kyiv. 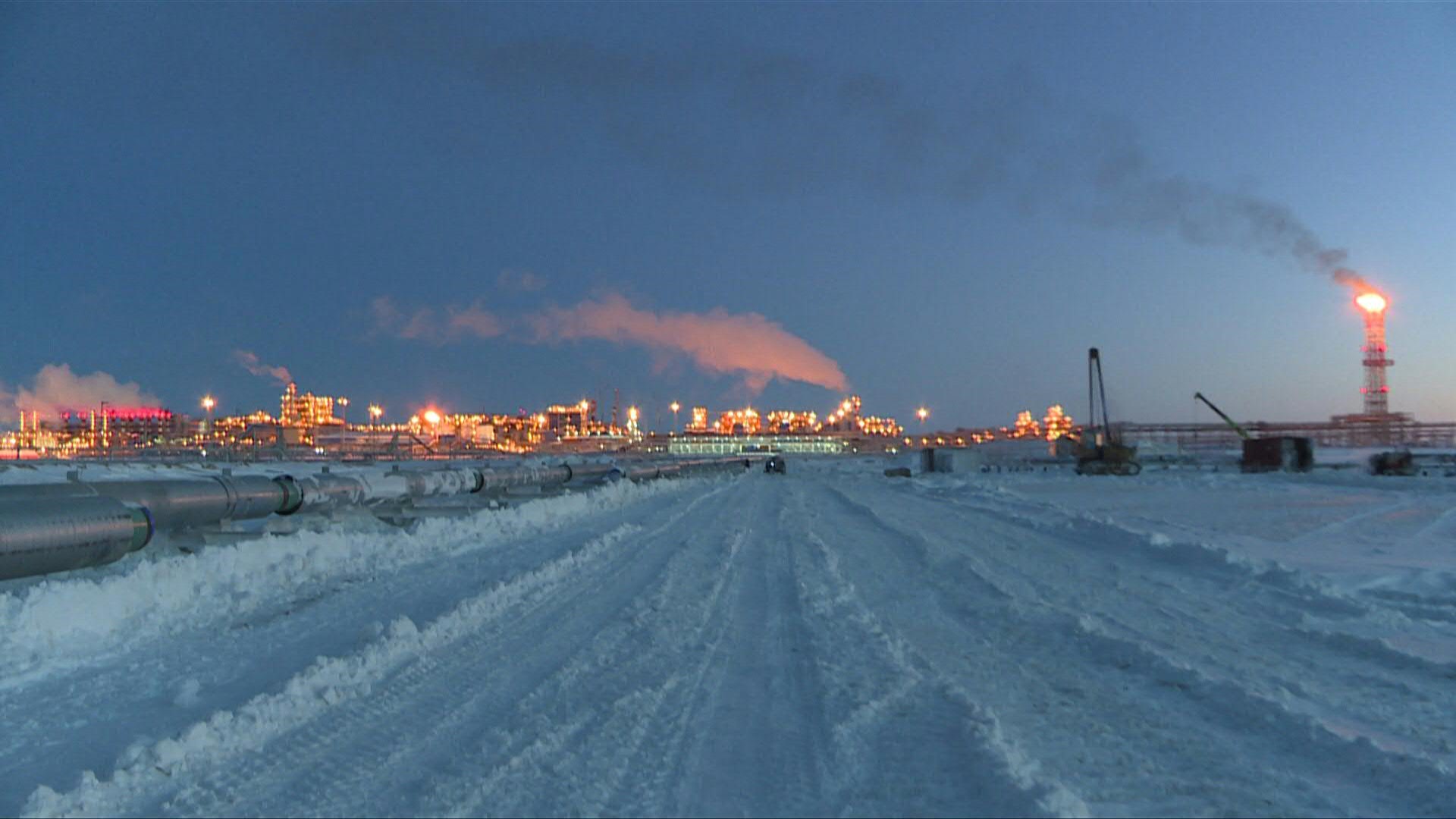 The supply of Russian gas to Europe via Ukraine was altered again on Thursday, as a result of the geopolitical and energy turbulence of two months of a war that does not give in

0030: At least three people were killed and 12 wounded in a Russian airstrike on a town in northern Ukraine’s Chernihiv region, Ukrainian military officials said Thursday.

In the early hours of the day, Russian troops fired numerous rockets at a school and a residential complex for students in the city of Novhorod-Siversky, the “North” Operational Command said on Facebook.