Cancún: The CNDH issues a recommendation for the forced disappearance of three Colombians

By forced disappearance of three persons of Colombian nationality and the arbitrary execution of one more of the same nationality, the National Human Rights Commission (CNDH) addressed a recommendation to the head of the Attorney General’s Office (FGR), Alejandro Gertz Manero; the head of the National Commission for the Search for Persons (CNB), Karla Quintana; the attorney general of Quintana Roo, Óscar Montes de Oca, and the municipal president of Benito Juárez, Quintana Roo, María Elena Hermelinda Lezama.

According to the Commission, on December 18, 2017, the foreigners were detained by elements of the Municipal Secretariat of Public Security and Traffic in the town of Cancún, municipality of Benito Juárez, Quintana Roo, and subsequently, sums of money were demanded from their next of kin to release them. 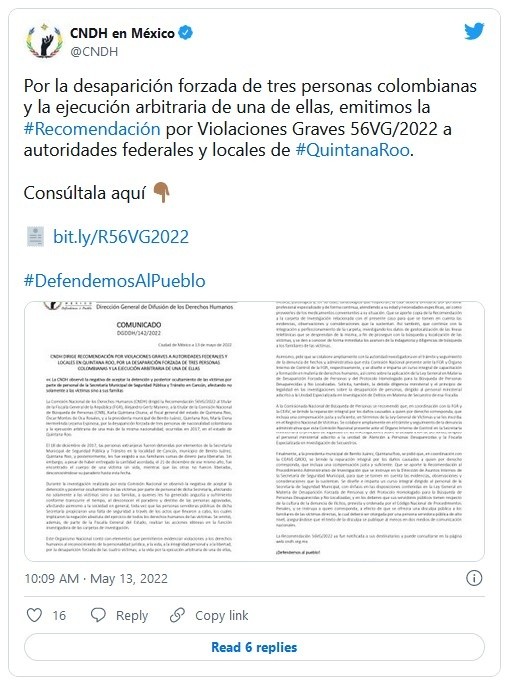 However, despite having delivered the agreed amount, on December 21 of that same year, the body of a lifeless victim was found, while the others were not released, their whereabouts unknown to this date.

The CNDH highlights that there was concealment of the victims by personnel of the aforementioned secretariat, affecting not only the victims but also their families, and points out that the State Attorney General’s Office failed to carry out the appropriate actions in the investigative function of the investigation folders.

“This national body had elements that made it possible to demonstrate violations of human rights to the recognition of legal personality, to life, to personal integrity and to liberty, due to the forced disappearance of the four victims; to life due to the arbitrary execution of one of them, as well as access to justice, in its modality of obtaining justice to the detriment of the families of the victims”, the institution points out.

The CNDH requested the Attorney General of the Republic, in coordination with the National Search Commission and the Executive Commission for Attention to Victims (CEAV), to provide comprehensive reparation for the damage caused to whom by right it corresponds, including fair compensation. and sufficient due to the irregular integration of the investigation folder, in terms of the General Law of Victims and they are registered in the National Registry of Victims.

It also requests that the families of the victims be given the medical, psychological and, where appropriate, thanatological care they require, which must be provided continuously by specialized professional personnel, taking into account their age and specific needs, as well as provide them with the appropriate medications for their situation.