The Bank of Mexico (Banxico) decided to raise the interest rate to 7%, which represents a fourth increase of 50 basis points and the eighth consecutive increase in the target in the face of the highest inflation recorded in the last two decades. 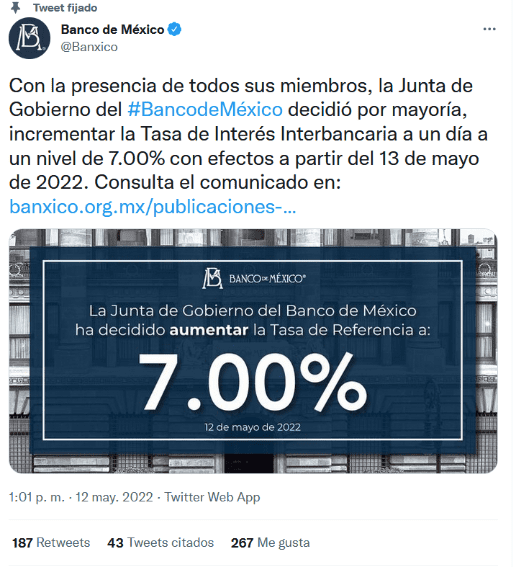 “The Governing Board evaluated the magnitude and diversity of the shocks that have affected inflation and its determinants, as well as the risk that medium- and long-term expectations and price formation are contaminated,” the central bank said in a statement. your advertisement.

The decision was approved by a majority of four out of five votes.including that of the governor, Victoria Rodríguez Ceja, while the deputy governor Irene Espinosa requested an increase of 75 basis points.

In the monetary policy announcement, Banxico also adjusted its inflationary expectations for 2022 from 5.5% to 6.4%, for 2023 it kept the previously forecast 3.2%.

For its decision, the magnitude and diversity of the shocks that have affected inflation and its determinants were taken into account, as well as the risk that medium- and long-term expectations and price formation could be contaminated.

He also considered the greatest challenges in the face of tightening global monetary and financial conditionsthe environment of marked uncertainty, the higher inflationary pressures associated with the geopolitical conflict and the resurgence of COVID-19 cases in China, and the possibility of greater effects on the inflationary environment.

EU imposes rules on crypto market for the first time: this is going to change

Wall Street ends higher, on the eve of the long weekend in the US

Why did Volaris cancel its plans to fly to the US from AIFA?