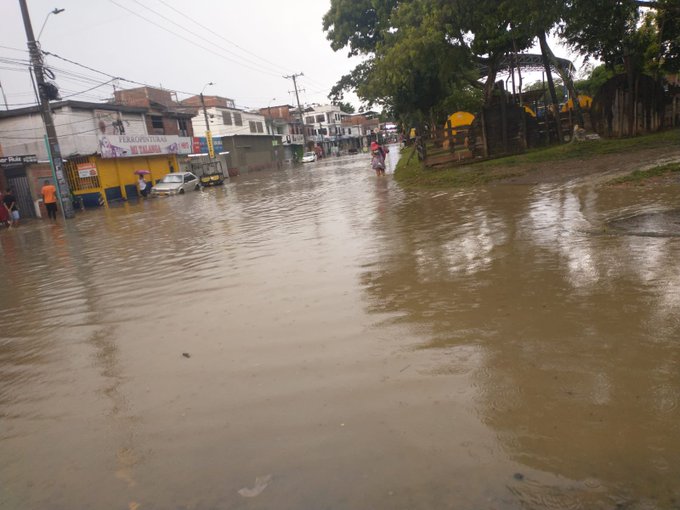 Tree falls, road flooding, roofless houses, strong winds and even fires; was what caused the rains yesterday in the capital of Valle del Cauca. These downpours began around 3 pm and continued into the night in various neighborhoods of the city. This generated some contingencies that derived affectations in the electrical infrastructure; by falling poles and damage to power terminals.

From the Municipal Companies of Cali, they assured that about 70,000 people stopped receiving electricity service during the night and early morning. The manager of Emcali’s strategic energy unit, Marino del Río Uribe, stated:

“As a result of the heavy downpour, 2 circuits have been taken out of us in their entirety; the circuit of Brittany, brisas de mayo and several sectors in the city, in the north, in the south and in the center of the city of Santiago de Cali; causing 68 thousand customers to be without the service”,

He added that officials were working during the early morning to restore power.

In fact, in Cali not only were they left without power, several houses were deroofed; There was even a fire caused by lightning in a Christmas lighting and decorations factory, which was located in the Guayaquil neighborhood. The city’s fire department responded to the emergency with 3 extinguishing machines, one from heights, and eight agents. According to authorities, no injuries were reported.

The coordinator of the Cali firefighters operations center, Marco Gómez, took stock of the emergencies reported during the day:

“We had several roads flooded in the city, they also reported strong winds over the north of Cali and they also informed us that there were several homes without roofs in the Floralia and Comfenalco neighborhoods. The wastewater canals of Calle 15 with Carrera 80 and Calle 16 had quite high levels, in addition there were some neighborhoods in which there was flooding on public roads.

From the Mayor’s Office of Cali they are promoting a campaign, since the city maintains alerts for the rainy season; That is why they ask citizens to act as ‘observers’ to report any emergency.

The Secretariat for Emergency and Disaster Risk Management calls on citizens to take into account certain situations, so that damages or risks derived from different contingencies are avoided: be attentive to the levels of the rivers since sudden floods can occur, mainly it is recommended that those people who live in the vicinity of rivers or streams be warned; also, proceed carefully in hillside areas due to possible landslides, drivers are asked to drive carefully due to puddles, especially on highways where they are asked to report any developments to the authorities.

The Secretariat also recommends that, in case of electrical storms, regarding the fire in the factory; always look for safe shelters, do not expose yourself in open areas or under trees and even near tall metal structures. If possible, it is recommended to be in the houses, there they suggest turning off and disconnecting electronic equipment.

Finally, it is recommended to check the state of roofs and elevated structures, which could collapse due to strong winds or standing water. In addition, they ask to advance cleaning work on roofs, gutters, downspouts and/or drains.

In case of noticing an emergency, Caleños can communicate to the lines: