There were hardly any Lucas Paqueta or Maxence Caqueret jerseys on Tuesday evening among the 22,901 spectators present at Parc OL. On the other hand, pretty flocked pieces with the names of Patrice Carteron, Bryan Bergougnoux and Juninho were there. Because before attending disillusioned the last home game of this Ligue 1 season, Saturday (9 p.m.) against FC Nantes), Lyon supporters were treated to “an enchanted parenthesis” in Décines (Rhône). Namely a match of the Heroes which above all made it possible to collect 482,490 euros for Unicef ​​and OL Fondation, especially in order to come to the aid of child victims of the war in Ukraine.

Seven months after its Marseille version, this Heroes’ match spearheaded by Sonny Anderson brought together the players of the OL team, champions of France in 2002, on the occasion of the 20th anniversary of the first of their seven consecutive coronations in Ligue 1. And “Sonnygoal” did things well to try to make Lyon fans smile, frustrated by the current 8th place in the league and the slap received in the Europa League against West Ham (0-3). 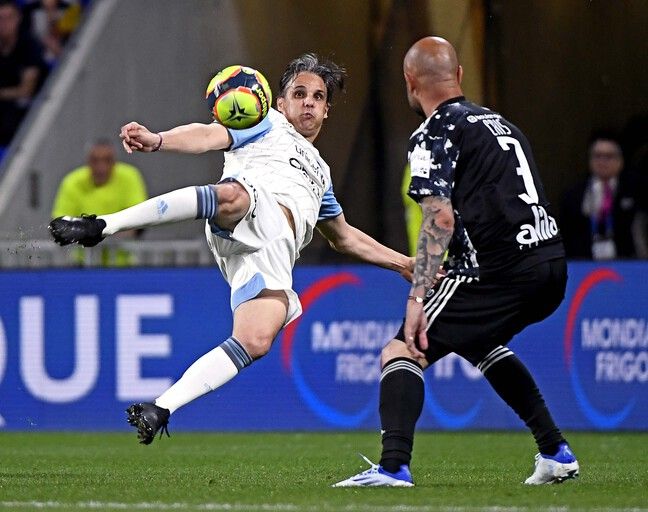 The Nuno Gomes-Cris duel looked like a hot opposition on Tuesday at Parc OL. – Stephane Guiochon

Former great footballers associated with videographers on the Team Unicef ​​side

Before this gala match played against a fierce Team Unicef ​​(Lehmann, Van Buyten, Mendieta, Nasri, Giuly… but also Belgian rapper Roméo Elvis, comedian Paul Mirabel and videographers Michou and Inoxtag), the striker 51-year-old Brazilian had promised the Bad Gones that he would score “as usual” on the side of the north corner before celebrating with the fans. Delightfully served by Swedish midfielder Kim Källström, Sonny Anderson kept his word to score the only goal of the game (1-0, 70th). “It’s my first goal in this stadium”, smiles the former captain of OL, who had scored for the side of Gerland, from 1999 to 2003, to allow the club to change dimension.

An era that still fascinates OL fans as much, when the bend launched almost from the kick-off on Tuesday the chant “It’s OL champion of France. If this team takes you…., to make you ch…, we will make them win”. A chorus from another time that Céline and Stéphanie (43) loved to find, subscribers to Bad Gones from the end of the 1990s, and who came with their boys on Tuesday evening to Décines. They do not hide their excitement: “It’s extraordinary to see our former players like Cavegoal, Anderson, Cris, Edmilson, Caçapa. It plunges us directly into nostalgia. They haven’t changed, although they’ve gained a bit of weight anyway. »

“It was with them that I learned to love football”

This is not the case for Jean-Marc Chanelet, sharp on his right side, Eric Carrière or Michael Essien, the ex-monstrous midfielder of OL then Chelsea. If they regret that this match did not take place in Gerland, Lucie and Jérémy (30 years old) confide: “Let us have fun tonight because we did not have the opportunity to do so in this rotten season of the OL”. Coming with his old Juninho jersey, whose flocking struggles to resist the years, Jérémy goes on to praise the players titled in 2002. “It is with them that I learned to love football”, slips Célian by their side .

Before raging against their distant successors? “We remember that OL made us love it 20 years ago, says the thirties Mickaël, also present Tuesday in Décines with his friends Coralie and Gabriel. We were in Gerland the evening of the title, in May 2002 against Lens (3-1) and it was by far our best moment in sport. There, the titles are far away, apart from the Gambardella. »

“This Hero match cannot erase everything”

It’s simple, the last trophy won by OL remains the Coupe de France against Quevilly (1-0), just 10 years ago. “We are all sad when there are difficult results like this season, specifies Kim Kallström (in Lyon from 2006 to 2012). I had a lot of hope for the Europa League, which could have brought a lot to the club. 10 years without a title, it’s sure that it’s a long time and that it creates a lack. But in my time, PSG did not have the Qatari means, which did change the face of the championship. And when you spend 35 years at the head of a football club like M.Aulas, it’s normal that there are ups and downs, right? »

Since taking power in 1987, JMA has rarely found its first team so low in the spring. The debacle of last week in Metz (3-2) is even synonymous with a second season without the European Cup over the last three years. Could the gloom be put aside on Tuesday at Parc OL? “This Heroes match cannot erase everything, but so much the better if this evening brings a little joy to the supporters”, notes Sidney Govou.

“A collective spirit of camaraderie”

How did Jacques Santini’s players approach this exhibition match? “Whatever happens, we said to ourselves that we had to win tonight”, announces Sonny Anderson, captain of this famous first title of champion of France in 2002. “We could see that even if the body does not respond not as fast as before, the victory is always in us, ”reassures former central defender Claudio Caçapa, now assistant to Peter Bosz. For Florent Malouda, “the winning culture is normally part of the club’s DNA. That’s why there is a lot of frustration at the moment given the inconstancy of the team.

Finally, what was the real recipe for this unbeatable OL on the roof of Ligue 1 for seven seasons, compared to the one who is about to end his probably worst season of the 21st century? The former left side or midfielder Christophe Delmotte, now coach of Valenciennes (Ligue 2) has his little explanation.

What’s great is that the group was put together gradually, with only two or three changes per season. OL’s most successful teams arrived after 2004. There was a lot of collective spirit of camaraderie, with brave players. It helped us, in difficult matches, to take us to the limit of surpassing ourselves, well beyond what we could do. Sonny then others pulled us up. It is the collective foundations that allowed us to have these titles. »

“Everyone has to get along wonderfully”

Admired by Jo-Wilfried Tsonga, OL’s “exceptional domination in the 2000s” again showed Tuesday evening all “the cohesion of the locker room”. Honor to striker Sonny Anderson to conclude this funny evening.

The Bad Gones see their wish granted after throwing “Sonny on the bend”. @sonnyanderson10, the absolute idol of Lyon supporters for the 2002 title, spoke with them for a few minutes. Not sure there is the same atmosphere on Saturday against FC Nantes in Ligue 1. pic.twitter.com/PYAZwMAQmQ

“When you always have the rage to win, it is not lost, he slips. Our group of friends had a good time 20 years ago and it was the same thing there. A family is built. We must understand together what it is to win. It is especially important that the club get on well with the supporters, just as the supporters with the players. For a family to move forward, everyone has to get along wonderfully. “On this point, the club has a lot of room for improvement to activate by the start of next season.