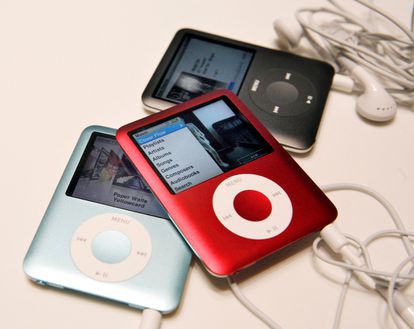 The iPod Nano were launched by Apple in September 2007. Robert Galbraith (REUTERS)

It sounds normal now, but it was revolutionary: a device small enough to fit in your pants pocket that could hold thousands of songs. Apple released it on the market in October 2001 and named it iPod. That little machine made those nostalgic for the Walkman forget and paved the way to the iPhone for the technology company from Silicon Valley. The company of the late Steve Jobs said goodbye to the iPod Touch on Tuesday, the latest model of one of the players that helped shape the 21st century and created a generation of young people with plugged-in headphones.

The touch model hit stores in 2007 and will continue to be on sale while supplies last. The company issued a statement on Tuesday announcing its decision. The task of making music available to everyone, which began with a minimum capacity of 5GB, is the responsibility of other apple brand products such as the Apple Watch, the iPad, the different models of Mac computers and of course the iPhone. , which hit the market in June 2007.

“Music has always been at the heart of Apple and bringing it to hundreds of millions of users has not only impacted the industry, but also redefined the way music is discovered, heard and shared,” Greg Joswiak, vice president of Apple Marketing, said Tuesday. Manzana. The executive assures that the spirit of the digital player will remain alive in other devices manufactured by the brand. Over the years, various competitors launched rivals to the iPod, creating a golden age for the Mp3 format and for the digital format. A model that today has been overshadowed by streaming.

The first player was introduced at Apple’s Music Event conference in the fall of 2001. Over time, the company released dozens of products until 2014, when the manufacturer began pausing the pace of releases to give it room to grow. to the iPhone. That year he said goodbye to the classic model, which was born with a capacity of up to 10GB. The Touch was one of the cheapest.

Apple, the most valuable company in the world with a valuation of 3,000 billion dollars, then underpinned the invention with the creation of a virtual song store on the Internet, iTunes Store, which turned the brand into a provider of multimedia content. Apple released the latest iPod touch model in 2019, which could be purchased for $200. To this it added the functions of a smartphone, but without calls or text messages, which differentiated it from the iPhone, with a capacity of 32 and 128 gigabits.