In addition to our overview of films on TV, we regularly highlight the best film on TV for you, so that choosing a film is even easier. Tonight our TV movie tip is the Flemish-Dutch war film Soldaat van Oranje (1977) with Rutger Hauer.

In 1939, student Erik Lanshof (Rutger Hauer) was initially unconcerned about the future, but when war broke out in the Netherlands on 10 May 1940, the adventurous Erik fled to England, where he joined the resistance. Far from reality in their own country, the seriousness of the German oppression hardly dawns on them. For Erik, this is the reason to take action.

The war film is directed by none other than Paul Verhoeven, the man behind RoboCop (1987) and Zwartboek (2006). In addition to Hauer, the other leading roles are played by Jeroen Krabbé, Susan Penhaligon and Edward Fox.

Watch the trailer for Soldier of Orange here:

Soldier of Orange can be seen tonight at 22:30 on SBS9. Have you seen the movie yet? Then view the overview of all films on TV. On this page you will find all TV movie tips for the coming week. 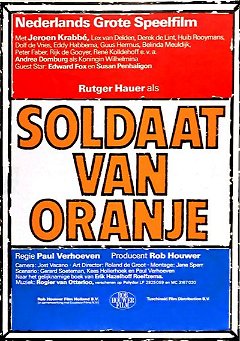 In 1939, student Erik Lanshof (Rutger Hauer) was initially unconcerned about the future. The misery in the world passes him by.