Specialists ask to review the airspace of Mexico City

Associations of pilots and airlines have expressed concern about the increase in potentially dangerous incidents in Mexico City’s airspace since it was redesigned to house a second airport.

They seem to indicate air traffic controllers have not been sufficiently trained to operate the new configuration.

In the last year, at least 17 alert incidents were recorded in the ground proximity warning system (GPWS, for its acronym in English) on planes bound for the Benito Juárez International Airport in Mexico City, according to a letter that the International Air Transport Association (IATA), which represents some 290 airlines, wrote this week to the chief of the Services to the Navigation in the Mexican Air Space (Seneam), the government agency responsible for the management of the air space.

“As you know, these alarms, without prompt action by the flight crew, can lead to a controlled impact into terrain (CFIT) scenario, considered by the industry to be one of the highest risk indicators in operational safety. and with a higher accident rate, as well as fatalities, ”said the letter. The Mexican body sent a request for comments to the infrastructure, communications and transport ministry (SICT) on Friday.

For its part, the International Federation of Air Line Pilots Associations (IFALPA) issued a safety bulletin in which it drew attention to this type of incident, as well as to the fact that some planes land with very little fuel after being forced to circle unexpectedly or divert to other airports due to excessive delays. He also cited “significant” warnings from ground proximity warning systems, including one near-miss situation.

The incidents occurred after the inauguration of Felipe Angeles International Airport, north of the Mexican capital, in March. The new air terminal – a military air base that was expanded – is one of the emblematic projects of President Andrés Manuel López Obrador.

“It would appear that with the opening of that new converted airport, ATC (air traffic control) has apparently received little training and support on how to operate this new airspace configuration,” the bulletin says.

The SICT, which supervises air safety agencies, acknowledged in a statement that there was a case of alert from the ground proximity warning system on an airplane on June 15, 2021.

But he said that was the only incident reported to authorities.

Both the pilots’ federation and IATA noted that One factor in the incidents appeared to be that air traffic controllers did not use standard phraseology in their communications with flight crews. The association requested a meeting with the Mexican aviation authorities as soon as possible.

López Obrador canceled the airport that began to be built in the previous administration, and that was to replace Benito Juárez, considering it too lavish.

At the time, concerns were raised that López Obrador’s plan to operate two airports simultaneously could create problems for the capital. The IATA letter states that the incidents have been reported “since the implementation of the first phase of the airspace redesign in the Valley of Mexico.”

The pilots’ federation bulletin also indicated that “crews have received authorizations that do not adhere to ground proximity restrictions” on routes used to reach Benito Juárez Airport. IFALPA declined to comment beyond what was stated in its bulletin and referred questions to its affiliate in Mexico. 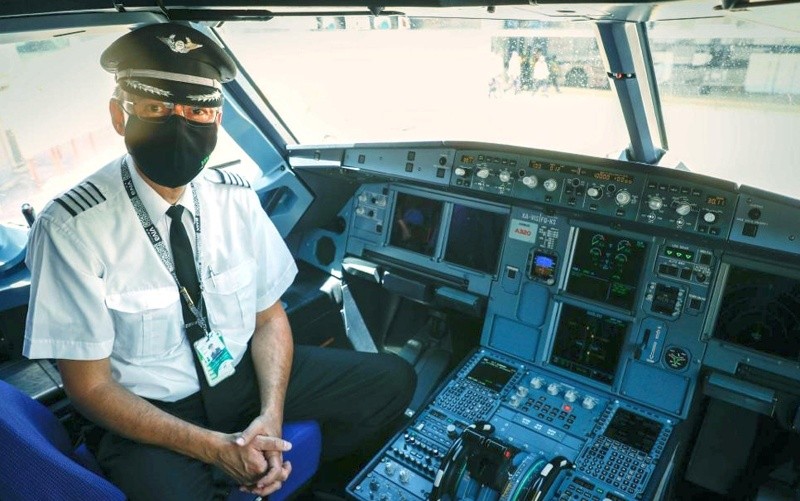 They plan to reduce trips to the Benito Juárez Airport

Last Wednesday, the undersecretary of Transportation Rogelio Jiménez Pons told the local press that the Government has decided to reduce by 20% the number of flights that land at the old airport. He did not mention the security bulletin or reported incidents.

The reduction will start in July and could divert some 10 daily flights to the new airport. The government had already said that any new scheduled flights to Mexico City will have to use the Felipe Ángeles, but the new reduction applies to some of the existing routes.

Jimenez Pons said that the old airport has to reduce traffic because it is overcrowded and needs renovation. He added that airlines can choose to fly to the Felipe Angeles terminal or to the farthest and practically disused airport in the city of Toluca, over a mountain pass west of the nation’s capital.

The Mexican pilots’ association, a member of the international federation, said Thursday that it had requested a meeting with Mexican aviation authorities to discuss the situation and share the experience of its pilots.

He asked Seneam “to attend to the reports of Mexican and foreign pilots, seeking, first of all, the safety of air operations and the efficiency of our airspace.”

A year ago, US regulators lowered Mexico’s aviation safety rating, a move that prevents Mexican airlines from increasing the number of flights to the United States.

The FAA reviews the case

The United States Federal Aviation Administration (FAA) determined that Mexico’s ability to supervise its airlines does not meet the standards established by the International Civil Aviation Organization. Those standards cover a wide range of topics, including the regulator’s technical prowess, inspection procedures, and record keeping.

The IATA letter alluded to this situation and noted that These incidents “undoubtedly do not help in the process in which Mexico is immersed, to try to recover IASA category 1, which was withdrawn by the FAA last year.”

The National Chamber of Air Transport of Mexico asked the country’s aviation authorities “to attend with the highest priority to the reports that have been made for months and allow to know the diagnosis and the corresponding risk mitigation measures.”