DIRECT. War in Ukraine: fighting intensifies in the south and east of the country 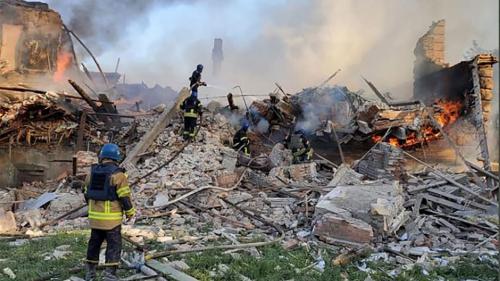 More fighting in southern and eastern Ukraine. Missiles targeted, Monday, May 9, the region of Odessa, where the Ukrainian army counts seven strikes and deplores one dead and five wounded. In addition, “very intense battles were taking place around Roubijné and Bilogorivka” in the Luhansk region, in the east, said Governor Serguiï Gaïdaï. Follow our live.

The President of the European Council forced to take shelter. On Monday, Charles Michel, on a surprise visit to this large southern city, was forced to take shelter. “You are not alone. The EU is on your side” in the face of Russian “aggression”, declared Charles Michel alongside Ukrainian Prime Minister Denys Chmygal. “We will be with you as long as it takes,” he continued.

Arms deliveries are accelerating. The Ukrainians can count on American military aid which has already amounted to some 3.8 billion dollars since the beginning of the conflict. It should be further facilitated by the signing on Monday by President Joe Biden of the “Ukraine Democracy Defense Lend-Lease Act”. This “lend-lease” law takes up the system adopted in 1941 by Roosevelt giving the American president extensive powers to support the war effort in Europe.

A new meeting at the UN. The UN Security Council is expected to hold a new public meeting on the war in Ukraine on Thursday, in view of “the continuing deterioration of the humanitarian situation”, diplomats announced. Requested by France and Mexico, this session will be the 16th of the Security Council since the Russian invasion of February 24.

Failure of negotiations on the Iranian nuclear program