War in Ukraine: what to remember from Sunday, May 8 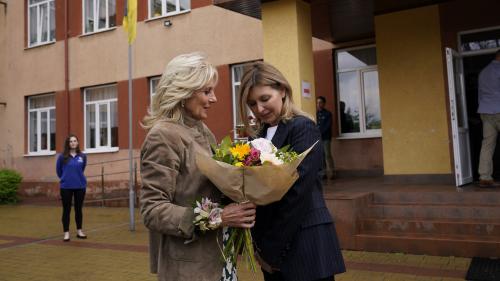 On the 73rd day of the invasion in Ukraine, Sunday May 8, the G7 countries announced that they would stop imports of Russian oil, a way of putting pressure on Moscow on the eve of “Victory Day”. On this day, Vladimir Putin should praise the power of the Russian army, while the latter continues to bombard eastern Ukraine. Franceinfo looks back on the highlights of the day.

“The entire G7 is committed to banning or phasing out imports of Russian oil,” the White House announced on Sunday. The G7 does not, however, specify what are the exact commitments of each country (Germany, Canada, the United States, France, Italy, Japan and the United Kingdom).

For the G7, the actions of Russian President Vladimir Putin in Ukraine “cover Russia and the historic sacrifices of its people with shame”, the G7 countries were indignant.

Sixty people are missing after the bombing on Saturday of a school where they were taking refuge in the Luhansk region, in eastern Ukraine. The village of “Bilogorivka suffered an airstrike. The bombs hit the school and, unfortunately, it was completely destroyed,” the regional government said on Telegram. “There were a total of 90 people. 27 were rescued… Sixty people who were in the school most likely died.”

In Mariupol, the entrenched refuse to capitulate

The Ukrainian soldiers entrenched for many weeks in the underground galleries of the huge Azovstal steelworks announced on Sunday that they ruled out surrendering. It is the last bastion of resistance against the Russians in the devastated port of Mariupol, in the south-east of the country.

“Surrender is not an option because Russia is not interested in our life. They don’t care about leaving us alive,” a Ukrainian intelligence officer said from the basements of the industrial site. “We will fight until the best outcome of this situation.”

US First Lady Jill Biden met in Ukraine with the Ukrainian President’s wife, Olena Zelenska, at a school near the Slovakian border. “I wanted to come for Mother’s Day. I thought it was important to show the Ukrainian people that this war has to stop,” she said.

Canadian Prime Minister Justin Trudeau traveled to Irpin, a town on the outskirts of kyiv devastated by intense fighting. These two visits had been kept secret.

Bono and The Edge, from U2, in concert in the kyiv metro

Irish singer Bono praised Ukraine’s fight for “freedom” during a concert on Sunday at a kyiv metro station. From the platform of a station, he sang the classics of his group U2, Sunday Bloody Sunday or Desire, while air raid sirens sounded in the Ukrainian capital.