United States: American companies come out of the silence and take a position on abortion 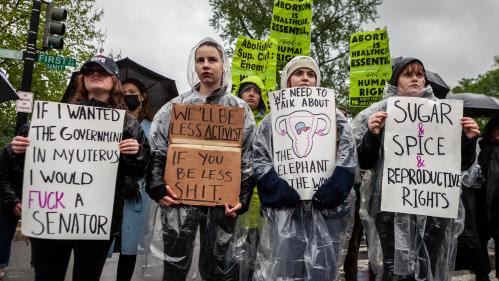 End of a taboo. More and more American companies are currently taking a stand on the right to abortion, a sign of the emergence of a new generation with different expectations. It only took a few hours after the leak, Monday, May 2, announcing the possible reversal of the Supreme Court on the question of abortion for part of the American economy to react publicly.

“Knowing what is at stake, corporate leaders must speak up and take action to safeguard the health and well-being of our employees,” Levi Strauss officials wrote. “This involves protecting reproductive rights.” Like the famous jeans manufacturer, Apple is committed to covering the costs incurred by its employees who should travel to another state to perform a voluntary termination of pregnancy.

Going back on the right to abortion “would jeopardize the rights of millions of women”, the participatory research platform Yelp told AFP, which evokes “an earthquake for our society and our economy” and calls on companies to “initiate”.

Since the entry into force in September, in Texas, of a new law reducing the time limit for performing an abortion to six weeks, the taboo has been cracked and Amazon, Uber or even the bank Citigroup have all announced that they will bear the costs. additional costs that this text may induce for their employees.

“We are living in an unusual time politically and this issue has become paramount again, which will force companies to come forward,” said Maurice Schweitzer, professor at Wharton University of Pennsylvania. “Companies located in States which could return [sur l’accès à l’IVG] must decide whether or not they cover the associated costs (…), this therefore forces them to position themselves in fact”, also affirms Neeru Paharia, professor at Georgetown University.

According to New York Times, Tesla, which has just moved its headquarters from California to Texas, has agreed to reimburse these expenses. The new audacity of some of the American companies is also linked to the fact that “in this country, people in favor (of the right to abortion) are more numerous than those who are opposed to it”, recalls Neeru Paharia.