War in Ukraine: what to remember from the day of Saturday May 7 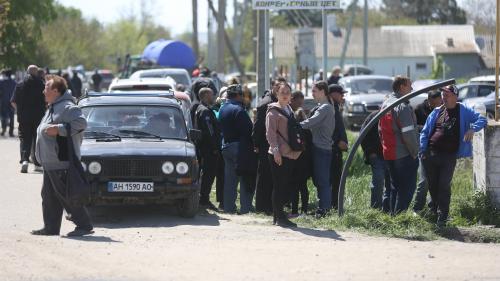 On the 73rd day of the Russian invasion of Ukraine, Saturday May 7, evacuations continued in Mariupol, a port city in the south of the country totally devastated by Russian forces. According to the government, they allowed all women, children and the elderly to flee the Azovstal steelworks, a site targeted by Russian bombardments. Franceinfo looks back on the highlights of the day.

All women, children and elderly people evacuated from Azovstal

All the women, all the children and all the elderly have been evacuated from the Azovstal steelworks, the last pocket of resistance of the Ukrainian forces in Mariupol, a port city devastated by the fighting with the Russians, announced kyiv. On Friday, 50 people were able to leave this huge steel complex.

These operations, which have been taking place for a week under the aegis of the UN and the Red Cross, have allowed, according to the Ukrainians, nearly 500 people to flee.

Ukraine claims to have destroyed a Russian warship

The Ukrainian Navy claims to have destroyed a Russian warship near the small Snake Island in the Black Sea, which has become a symbol of resistance to the Russian offensive. The Serna, a fast landing ship with a carrying capacity of 45 tons, was hit by a drone, she said on Facebook. Moscow did not confirm the information.

Moscow prepares for May 9 parade

Final rehearsals took place on Saturday before the traditional military parade on May 9 in Moscow celebrating the victory over Nazi Germany, which will be the occasion for a show of force in the middle of the struggling Ukraine campaign. Vladimir Putin will have a new opportunity to send warnings, after Russia has repeatedly brandished the nuclear threat.

According to the Russian Ministry of Defense, the “plane of the Apocalypse”, an Ilyushin Il-80 specially designed to allow the president to rule the country from the air in the event of nuclear war, will fly over Red Square.

Several pieces of equipment capable of firing nuclear missiles, such as the Iars RS-24 intercontinental ballistic system and the shorter-range Iskander system, will also be paraded.

No evidence that Moscow would use nuclear weapons: CIA

“Dizzying” violations of rights observed by the Council of Europe

The Council of Europe Commissioner for Human Rights has denounced the “dizzying” violations of human rights and international humanitarian law by the Russian army in Ukraine, after a four-day visit to kyiv and its region. “The names of Boutcha, Borodianka, Irpin or Andriivka have come to symbolize the horrible acts that have been committed here,” said Dunja Mijatovic.

The Council of Europe, watchdog of human rights on the continent, had been left by Russia a few days after the start of its offensive in Ukraine.