War in Ukraine: what to remember from Friday, May 6 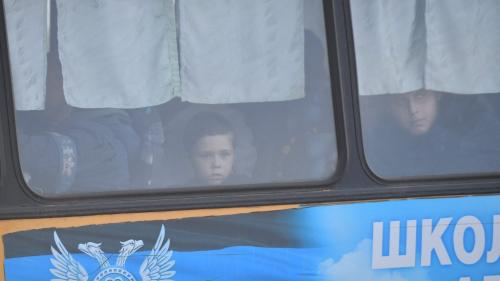 On the 72nd day of the Russian invasion of Ukraine, evacuations resumed in Mariupol, a port city in the south of the country totally devastated by Russian forces. Fifty more civilians were able to leave the huge Azovstal steelworks thanks to a new convoy, the Ukrainian and Russian authorities announced on Friday 6 May. Franceinfo looks back on the highlights of the day.

Evacuations of civilians from the Azovstal factory in Mariupol have resumed

Fifty more civilians were able to leave thanks to a new convoy the immense Azovstal steelworks, the last pocket of resistance of the Ukrainian forces in Mariupol, announced the Ukrainian Deputy Prime Minister, Iryna Vereshchuk, and the Russian Ministry of Defense. They are women, children and the elderly, she said, adding that evacuations would continue on Saturday, which Moscow later confirmed.

These operations, which are taking place under the aegis of the UN and the International Committee of the Red Cross (ICRC), began last weekend and, according to kyiv, have enabled nearly 500 civilians to flee.

The UN Security Council unanimous for a “peaceful solution”

The UN Security Council has unanimously given its “strong support” to “the search for a peaceful solution” in Ukraine, in the first show of unity since the start of the Russian invasion of that country . In the declaration drafted by Norway and Mexico which it adopted, the Security Council, of which Russia is a permanent member, recalls that “all Member States are committed, under the Charter of the United Nations, to the obligation to settle their international disputes by peaceful means”.

“Today, for the first time, the Security Council spoke with one voice for peace in Ukraine,” said the UN chief in a statement. “The world must unite to silence the guns and uphold the values ​​of the UN Charter” and “I will continue to spare no effort to save lives, reduce suffering and find the path to peace”, added Antonio Guterres.

The President of the United States announced new military aid to Ukraine to combat the Russian invasion, including artillery munitions and radar. However, Joe Biden has warned that the arms funds for Kyiv are now “virtually exhausted”. A US official said the aid amounted to $150 million, well below previous US arms shipments.

For Hungary, the European Union has “crossed the red line”

“There comes a time when you have to say stop.” Hungarian Prime Minister Viktor Orban said the European Commission had crossed “a red line” by wanting to ban imports of Russian oil. The nationalist leader said that “Commission President Ursula von der Leyen “has voluntarily or not attacked European unity”.

The negotiations carried out at the level of the ambassadors of the Member States will be “complicated”, confided a diplomat. The unanimity of the 27 is required for the adoption of sanctions. “Hungary has a problem and (the ambassadors) need to solve it. Technical clarifications are needed, and it will take some time. It will continue over the weekend for technical, not political work,” a diplomat explained. European informed of the discussions.

The pilot edition of a new independent Russian daily, launched by exiled journalists from the opposition newspaper Novaya Gazeta, arrived on newsstands in Latvia on Friday. At the end of March, the Novaya Gazeta newspaper, run by Nobel Peace Prize winner Dmitry Muratov, suspended its online and print publications in Russia until the end of the intervention in Ukraine.

The new newspaper, Novaya Gazeta.Europe, “is a publication created by free Russian journalists who found themselves in forced emigration. This is their independent view on the events of the war in Ukraine and developments in Russia “, said the Rigas Vilni publishing house, the 2nd largest print media group in Latvia which is its publisher. The two versions of the new paper edition each contain 28 pages and retail for 1.29 euros.

Álvaro Uribe Vélez will meet this Wednesday with the president-elect, Gustavo Petro