Russian offensive in southern Ukraine: “It’s a real annexation that is being prepared”, analyzes a specialist 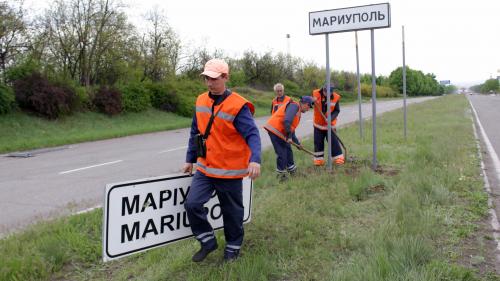 “It is a real annexation which is being prepared” in the south of Ukraine, declared on Friday May 6 on franceinfo General Jérôme Pellistrandi, editor-in-chief of the Revue Défense Nationale, while the Russians maintain their offensive in the south of the country, and in particular in Mariupol. The Azovstal steel complex in Mariupol, the last pocket of Ukrainian resistance in the city is one of its symbols. The evacuations of civilians are “extremely complicated”, confirms the general.

franceinfo: A senior Russian official said on Friday that Russia will always remain in southern Ukraine. There is no doubt now?

Jerome Pellistrandi: Yes, and it is in fact a real annexation which is being prepared, wanted by Moscow. At first, one might have thought that Vladimir Putin’s war objectives were to consolidate the Russian presence in the Donetsk and Donbass regions. But obviously, the Russians want to go much further since they want to control and annex the oblast of Kherson and that of Zaporijia. It’s really something that poses a real fundamental problem because it’s an annexation in good form, exactly as it was practiced in the 19th century.

Should we be worried about the Azovstal factory in Mariupol where the evacuation of civilians promises to be very complicated?

It is extremely complicated. You have to realize the magnitude of the task. The steel complex is more than eleven square kilometers, it is larger than the 16th arrondissement of Paris. This means that the combatants, but also the civilians who have been hiding inside for several weeks to protect themselves, you have to be able to get them out, to transport them. Even as fighting continues and the Russians are reluctant to actually practice a long-term ceasefire that would allow this safe exit of these civilian personnel.

On May 9, Russia will celebrate victory over the Nazis in 1945. The Americans announced a parade in Mariupol and a declaration of war on Ukraine by Vladimir Putin in his speech. Is this plausible?

It is necessary to underline the effectiveness of American intelligence, which had moreover announced the start of the offensive whereas obviously, many European countries did not believe in this offensive. So far, the Americans are making a considerable intelligence effort. If only to share it and protect the NATO countries, but also to help the Ukrainians by providing them with intelligence. Concerning the parade of Mariupol, it is more symbolic and political than really military. We will see what will be the declarations of Vladimir Putin.

It would be a very strong message sent to its public opinion to say in a way that “Ukraine is attacking us” and that we must go further, we must continue “denazification”. This would also allow Vladimir Putin to mobilize, to resort to an additional military resource. Men between the ages of 35 and 45 who have done their military service could be recalled in uniform to go and fight in Ukraine. And of course, that would be a message addressed to the international community and in particular to Western countries, to say that Russia is ready to go all the way to fulfill its objectives. This means that the speech of May 9 will be scrutinized very closely by all the chancelleries.