Madrid: Alcaraz joins Djokovic in the semi-finals, Tsitsipas defeats Rublev … What to remember from Friday’s matches 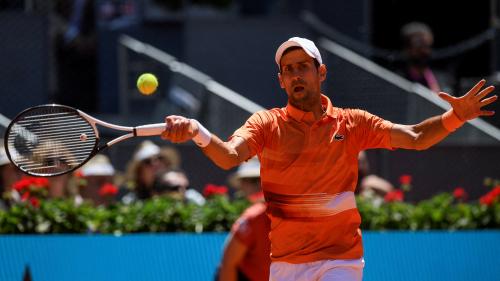 A day of champions. With almost exclusively clashes between seeded players, the quarter-finals of the Masters 1000 in Madrid on Friday are making more than one salivate. Novak Djokovic opened the ball perfectly under the Madrid sun by beating Hubert Hurkacz in straight sets. Following the world number one, Rafael Nadal entered the court to face the prodigy Carlos Alcaraz in a shock awaited by all the followers. It was ultimately the 19-year-old who got the better of the Mallorcan in three sets (6-2,1-6, 6-3).

The Spanish evening continued with the clash between Andrey Rublev and Stefanos Tsitsipas, and that between Félix Auger-Aliassime and Alexander Zverev.

If his state of form has largely been up and down this season, in particular because of his absence from the circuits for his anti-vaccine positions, Novak Djokovic seems to have regained his mojo. On the Madrid ocher, the Serb quite easily disposed of the Pole Hubert Hurkacz in 1h22 of play, unseated and without much solution from start to finish against the world number one (6-3, 6-4).

Despite a twisted ankle in the middle of a match, the rising star of Spanish tennis did not crack. Imperial in the first round, Carlos Alcaraz dominated a Rafael Nadal still looking for rhythm, in 2h17 of play. Shaken by his fall, the 19-year-old Murcian was punished by his model in the second round, before remobilizing and to regain the ascendancy to win (6-2, 1-6, 6-3).

1. For the first time in his career, @RafaelNadal lost a match on clay against a player under the age of 20! #MMOpen pic.twitter.com/Y6pPBSJMmA

“There was a lot of force in his shots, it was difficult to know what was going to happen. It was difficult to play against him, as usual. I put all my soul into finishing this game”, commented the Greek at the end of the meeting. Sacred in Monte-Carlo, Stefanos Tsitsipas had to work to defeat the Russian Andrey Rublev in three sets (6-3, 2-6, 6-4) and 2h01 of play.

The world number 5 ended up winning after a disjointed match. After quickly imposing his paw on the game by inflicting a 3-0 entry, then winning the first set, the Greek was surprised by a more precise Russian in the service before recovering in the last set. Tsitsipas only had to convert two break points – one in each set – to dominate a particularly nervous Rublev in the important moments. He will face the winner of the final quarter-final between Félix Auger-Aliassime and Alexander Zverev.