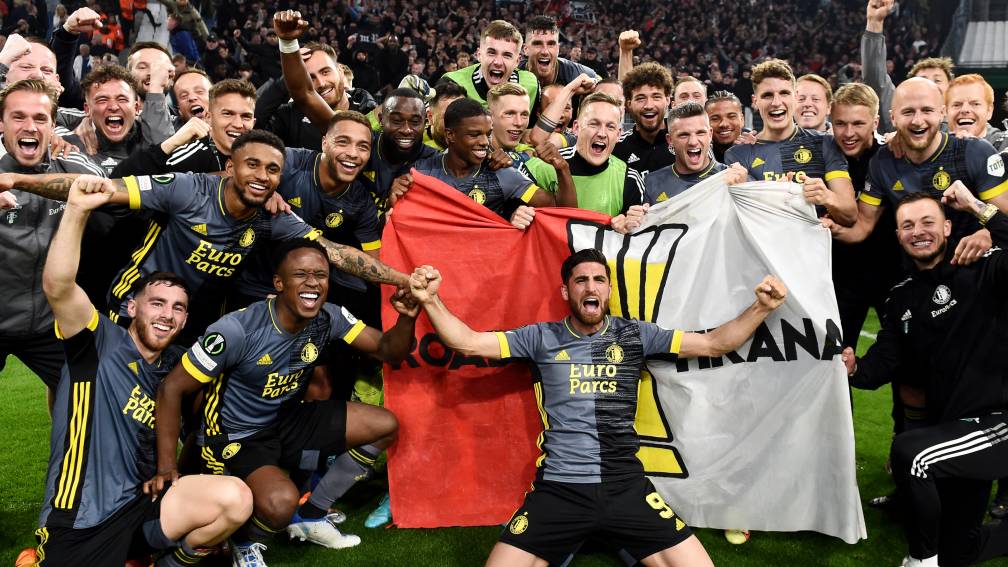 ‘Party in Marseille’. ‘Ticket to Tirana’. Or simply, capitals: ‘Finale!’. This is how the morning papers welcome the readers after the memorable evening in Marseille. The evening on which Feyenoord again qualified for the final of a European cup tournament after twenty years.

“Feyenoord secured a European final for the first time in twenty years in the most threatening decor imaginable,” writes Bart Vlietstra in De Volkskrant. “Between smoke, tear gas, irritating laser lights, deafening bangs and chants, tens of thousands of pogoing hotheads, of which more than ninety percent encouraged the opposing team, the Rotterdam team kept Olympique Marseille off the body. The game was not good, especially in the first 35 minutes Feyenoord looked for his new conductor identity obtained this season. But Feyenoord understood […] the art of suffering.”

“The success of Feyenoord is the success of trainer Arne Slot, argues Sjoerd Mossou in the AD. “With only a handful of purchases, Slot transformed a listless team into a dynamic unit that dared to rely on its own strength throughout Europe. Like a preacher, Slot passed on his game principles to the Feyenoord players until they could dream his commandments.”

“A huge triumph for Feyenoord and the excelling trainer Slot”, can be read in the Telegraaf . Valentijn Driessen even writes: “With attractive, fast attacking game according to the Hollandse School and direct hits on the transfer market – Dessers, Trauner, Aursnes and to a lesser extent Nelson and Pedersen – Feyenoord could no longer be stopped internationally.”

On July 22, Feyenoord’s long road in Europe began with a disappointing draw in Pristina. A week later, Feyenoord was even dangling by a thread when the puny FC Drita in De Kuip defended a lead well into the second half.

“Making memories, Feyenoord has been saying for months through the official club channels,” writes AD reporter Mikos Gouka. “Marseille was another great chapter. There is one more stop, in Albania, to complete the process. And if you can survive the hell of Marseille, you don’t have to lie awake for weeks before the final battle in the Conference League.”

Ten months later, on May 25, Feyenoord will face AS Roma in the final. That will be the nineteenth European game for the team from Rotterdam. There is no longer any question of a ‘jut-and-jul competition’, as national coach Louis van Gaal called the Conference League.

In NRC Handelsblad Fabian van der Poll makes a comparison with Feyenoord that won the UEFA Cup in 2002. “Fair is fair: the UEFA Cup was also a higher stage. It is the Europa League of today, the tournament above the Conference League. In fact a bigger prize. But emotionally? Look at the packed squares in Rotterdam, Thursday evening, and see how much They have fun there, regardless of the result. The Conference League less prestigious? As if the food in a one-star restaurant is so much inferior to that of a two-star chef.”

The Feyenoord fans will in any case be the worst. “Already months ago, fans booked flights for the final in the Albanian capital Tirana,” writes De Volkskrant. “The road there brought memories that will last a lifetime with many Feyenoord fans.”

French media mainly talk about a missed opportunity from Marseille and point to the injured player Dimitri Payet as the cause. The newspaper even mentions a European curse.

“Defensively it was much better than last week, but Feyenoord could not be really embarrassed by Olympique Marseille,” writes L’Équipe. “Without Dimitri Payet, who had dropped out, a lot went wrong from a technical point of view. L’OM was stranded in front of the gates of the final.”

In the Italian La Gazzetta dello Sport, there is of course especially attention for AS Roma, which will be the opponent of Feyenoord on 25 May in the final in Tirana. That will be a reunion with child of De Kuip Rick Karsdorp.

“Delirium on the Olimpico,” headlines the pink sports newspaper. “31 years after the last time, Roma returns in the final of the European Cup. Mourinho can add the Conference League to his endless trophy cabinet on May 25 in Tirana: only Feyenoord remains between Roma and the trophy.”

Many words are devoted to English striker Tammy Abraham, who headed his Italian employer to the final against his compatriots from Leicester City. The newspaper also refers to the last meeting between Roma and Feyenoord.

In 2015, Roma reached the eighth finals of the Europa League in a clash that will be remembered mainly for the destruction in the historic center of Rome.

“Then the Dutch fans played the leading role in a guerrilla war in the city center. However, this time it will be played in Albania and the match is worth a trophy.”