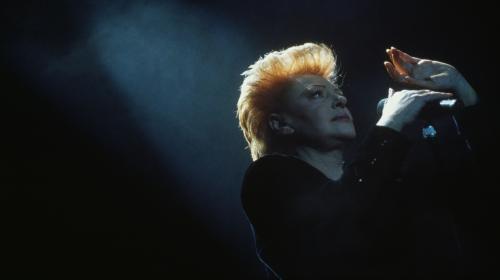 Queen of the party and the night, singer Régine has enjoyed success with several hits. Here are five:

“Lais-ssez par-ler / Les p’tits papiers”… This song, one of the twelve that Serge Gainsbourg wrote to her, remains one of the most famous titles of the singer. To compose it, Gainsbourg was inspired by the song Les Petits pavés, Régine reminding him of Fréhel, their common passion.

The queen of nightclubs was immediately won over by this title to a ragtime tune reminiscent of Scott Joplin. The song is punctuated every second stanza with the word “paper” followed by a different adjective each time.

Régine will also perform it as a duet and the song will be the subject of many covers, notably by Jane Birkin.

A colorful and joyful ode to the world of the night and to the figure of the transvestite. On a text by Frédéric Botton, this is the song that best sums up Régine and her cheeky Parisian titi.

The tube tells the nocturnal trips of a mysterious and flashy woman with her “jewels”, her “chinchillas” and her “boa around her neck”. We discover as the song progresses that the lady, with “that big neck”, is a transvestite who frequents the “White Square” and its homosexual meeting places.

“You’ll see, it will slide better…”. Another irreverent song written by his great friend Serge Gainsbourg, the king of provocation. The author of Lollipops plays here, once again, on ambiguity.

“It’s crazy, the effect that this song has on people! They think it’s funny, with a sexual background, while above all it shows the bitterness and tragedy of life”, said Regine.

Régine covers in French this hit by Adriano Celentano, released in 1968. Composed by Paolo Conte, the song immediately entered the collective imagination of Italians.

Eddy Marnay adapts it in French for the singer. It will be one of the biggest successes of Régine, who re-records it in several versions.

For this still scandalous title, Serge Gainsbourg once again chooses Régine and her cheeky cheeks to interpret it even if he hesitates a little while slipping to her: “I don’t know if this song is made for you, if you’re going to have the nerve “.

With lyrics that return with humour, like a wink, the prejudices against homosexuals, often mocked for their gestures deemed effeminate: “Women, it’s fagot, it’s very effeminate / So effeminate, that ‘it’s fagot… And when it moves your hips / It makes CEOs walk’.