Legislative 2022: at the PS, elected officials torn between supporters of an alliance with Mélenchon and guardians of the socialist temple 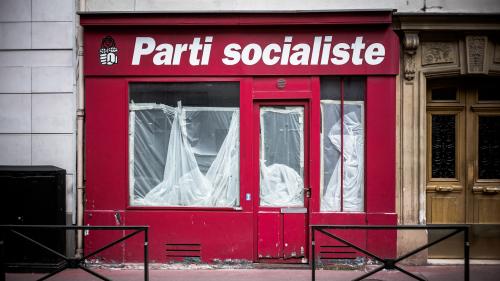 A party on the verge of implosion. The Socialist Party “suspended”, Friday April 29, the negotiations in progress with La France insoumise with a view to an agreement for the legislative elections of June 12 and 19 next. A decision supposed to appease the few elected officials, executives and historical figures of the party, who castigate the discussions with the formation of Jean-Luc Mélenchon. Only a few weeks before the legislative elections, these dissensions threaten the union of the left and the PS itself, threatened with a split.

>> Legislative 2022: negotiations continue on the left. Follow our live

On the strength of its score in the first round of the presidential election (21.95% of the votes cast), La France insoumise proposed, via its People’s Union, “twelve markers” for discussion to bring the left-wing parties together towards an electoral agreement. . A hand extended to the Socialist Party, Europe-Ecologie-Les Verts, the French Communist Party or the New Anti-Capitalist Party.

After having partly aligned with the program of Jean-Luc Mélenchon, as stated in a document published on Thursday, the PS is now distancing itself and says it needs more pledges to continue to negotiate. “We want to reach an agreement of all the left and environmentalists (…) But to achieve this, this requires a real shared logic. We must break with any hegemonic logic and accept plurality. At this stage we have none. not the guarantee”, wrote the direction of the PS Friday in an internal message, of which franceinfo was able to consult a copy.

Should we see in this suspension a need for time to agree internally? After the cold shower of the first round of the presidential election (1.7% of the vote, the worst score of the PS in this election), the formation led by Olivier Faure is going through a zone of strong turbulence. The prospect of the legislative elections, for a time perceived as “a tool for reconstruction” by the socialist senator Patrick Kanner, creates, on the contrary, intense debates on capital points such as the place of France or within the European Union or the retirement system.

In the document published on Friday, the PS operates a slight change of course about the EU. “The implementation of the program that we are building will necessarily lead to tensions (…) and to not respecting certain rules”, writes the party leadership, before justifying itself: “We will not be the first or the last to do so. to do, in France as in Europe.” A statement that does not pass for the former socialist president, François Hollande, because it would call into question “the foundations of socialist commitment”.

Alliance on the left? ➡️ “Does that mean that the next government would have to question the European treaties? To leave NATO? To no longer help the Ukrainians?”, attacks François Hollande, who recalls that the retirement at 60 was made by the PS. pic.twitter.com/MF63XN2v6r

In a column published Friday evening, eight socialist mayors of large cities seem to adopt a middle course. These city councilors, including the mayors of Rennes, Nathalie Appéré, and Nantes, Johanna Rolland, say they are in favor of a union of the left “with respect for the identities and values ​​of each” and reaffirm “the primacy of European law”. And underline at the same time their desire to “change the rules of the game” within the EU.

On the subject of pensions, the management of the PS said it was in favor of a “right to retire at 60”, as Jean-Luc Mélenchon wishes. Two years earlier than what the socialist candidate, Anne Hidalgo, who wanted to “sacralize” the current legal age of departure, 62, proposed. “Everyone knows that it is financially impossible”, reacted François Hollande at the microphone of franceinfo.

Echoing the criticisms of the former socialist president, an increasingly virulent revolt is being heard within the PS. The minority current “Stand up the socialists”, led by the mayor of Vaulx-en-Velin, Hélène Geoffroy, does not digest the remarks made by the first secretary of the party during a meeting of the national office on Tuesday. “If you think that the PS is dead, that there is nothing more to do, that you no longer belong to the left, then leave! Join La République en Marche”, had launched Olivier Faure to the opponents of the negotiation with La France insoumise.

A reference to the formula used a few days earlier on Public Sénat by the former minister and mayor (PS) of Le Mans, Stéphane Le Foll. “This party is dead, this party is finished”, he declared, adding that Olivier Faure was engaged in “a strategy which leads to electoral obliteration”. “It is not a negotiation or an agreement that is proposed [par LFI]it’s a surrender”, for her part reacted Hélène Geoffroy in a letter published on Tuesday. A point of view shared by François Hollande, possible candidate in Corrèze, who denounces an agreement “unacceptable in terms of what it represents electorally”.

Critics also fuse on the side of the socialist senators, the second political force at the Luxembourg Palace. “Who was consulted on the text sent by the PS to LFI? Neither me nor any instance of the PS”, was surprised on Twitter the senator of the North, Martine Filleul. “I am neither committed nor bound by this approach”, added the senator from Val d’Oise, Rachid Temal.

If La France insoumise says it is confident in the continuation of negotiations with the PS, its leader, Jean-Luc Mélenchon, did not fail to scratch the left parties this Saturday in Le Journal du Dimanche. “For some of our partners, winning is a chimera. They have a permanent culture of defeat,” he lamented, without specifying the names of the parties targeted. To reach a possible agreement on the left, time is running out. “We would like this to be settled on Sunday,” warned Jean-Luc Mélenchon, on the eve of the symbolic date of May 1. The People’s Union has planned to unveil the nominations to the candidates for the legislative elections on 7 May.