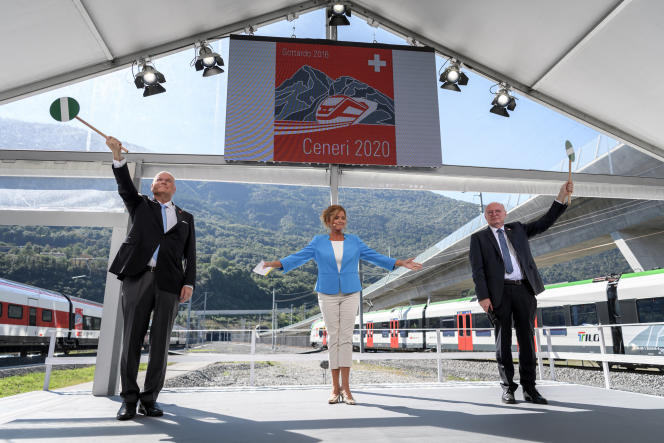 The Swiss motorways are certainly congested due to a cramped territory, made up of two-thirds of mountains, and one of the highest car ownership rates in the world. But what is striking, compared to the major axes of neighboring countries, is the relatively small number of heavy goods vehicles using them. Not that they avoid the territory of the Confederation, the obligatory passage between the first three economies of the European Union (Germany, France, Italy), but rather because, in Switzerland, the trucks (or rather their cargo) take the train.

Read also: Article reserved for our subscribers Freight transport by train is slowly waking up

At the beginning of the 1990s, the continuous growth of trade and the transit of goods by road threatened to transform the Alpine furrows of central Switzerland into a nightmare of pollution and traffic jams, which is the situation that the valley of l’Arve (Haute-Savoie) to the access ramp to the Mont-Blanc tunnel, in Chamonix. The theme has been at the center of political debate for a decade, with radical options taken by the government of Bern, validated three times by the population through votes. It became a great national cause for which they dug under the mountains, while prohibiting by law the increase in the capacity of the alpine transit routes.

Never had such deep tunnels been drilled in the world. The major works of these “new railway lines across the Alps”, called “NLFA”, lasted twenty-seven years and cost 22.6 billion francs (22 billion euros). They led to the commissioning of three new “base tunnels” (Saint-Gothard, Lötschberg, Ceneri). With 57 kilometers in length, that of Saint-Gothard is the longest in the world, but will be exceeded in a few years by that of Brenner, under construction between Austria and Italy. “So the NLFA is built. It is part of the European rail freight corridor linking Rotterdam to Genoa. It is therefore important that neighboring countries in turn do their job by improving access roads,” notes the Swiss Ministry of Transport.

Read also: Article reserved for our subscribers Road transport is inspired by rail to consume less

The opening of this new north-south axis in 2016 (passenger trains can travel there at up to 250 km/h, freight trains barely slower) has made it possible to speed up the transfer of goods from the road to the rail. In 2021, only 860,000 trucks crossed the Swiss Alps, compared to 1.4 million twenty years earlier (− 39%). This is still too much, since the political objective stipulated that this figure should drop to 650,000 passages. Despite everything, rail was able to increase its market share: 72.4% of transalpine goods traffic in Switzerland, against 25.3% in Austria and only 11.9% in France. A tax has accelerated the development of piggyback transport: the fee on heavy goods vehicles linked to services. It is levied on all trucks over 3.5 tonnes traveling on Swiss roads. The rate is calculated according to the weight, the emission of substances harmful to the environment and the kilometers travelled.