How to explain the fracture between the clubs and their supporters? 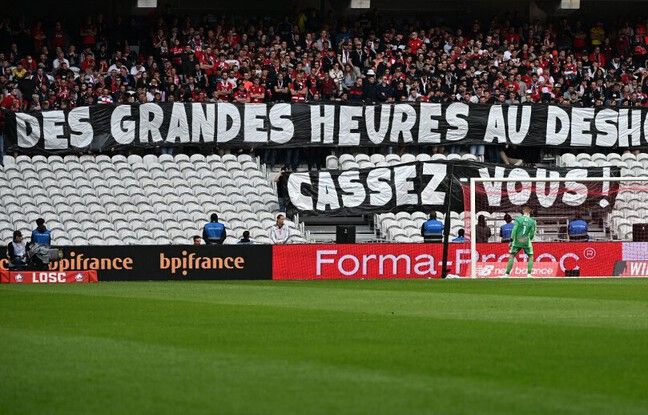 The excitement of the reunion will not last long. After nearly two years of pandemic, confinement and matches behind closed doors, we had guilis in our stomachs at the idea of ​​​​finding the public and the supporters in the stadiums. However, eight months later, the party is over. If there are still clubs where relations between the team and the fans are in good shape, from Rennes to Marseille via Strasbourg and Lens, we have rarely seen so much mess everywhere else in France. With, as a highlight, the 34th day, which will have seen four matches enamelled with more or less problematic events in the stands.

Strike of encouragement and incendiary banners against the players in Lille, celebration of the title in their corner by the ultras of PSG against Lens, interruption of the match Sainté-Monaco for a birthday of the Green Angels celebrated with fumis and fireworks, Mind-blowing confusion between the Virage Nord in Lyon and an overly roomy Karl Toko-Ekambi… Help yourself, there’s plenty to choose from. On the lower floor, we can also evoke the stoppage of the match in Nancy after supporters threw projectiles on the lawn to protest against the catastrophic situation of the clubalready relegated to National and in great economic difficulty.

To tell you the truth, we would like to take the subject from the right end that we don’t know how to go about it as the situations vary from one club to another. In Paris, for example, the problem does not date from yesterday (and not from the fiasco against Real as the PSG players seem to believe, wrongly), the CUP being at war both against sports policy of the club and the inability of the players to offer any collective identity on the pitch. In Lyon and Lille, it yells especially against results far from the aspirations of the start of the season.

“We are seeing a trend at the level of clubs which have been taken over by investment funds or pension funds and which have a vision of football and a management diametrically opposed to the values ​​and principles that supporters may have, reframes Killian Valentin , spokesperson for the National Association of Supporters (ANS). On the other hand, we do not observe a real general trend compared to what happened almost everywhere in the stands last weekend. Each situation is different according to the context, the disputes are made on specific points and in relation to a feeling and a local experience. This has to be dealt with on a case-by-case basis. »

Drawing on his experience on the issue of supporterism, Nicolas Hourcade also warns against the temptation to make these recent events “generalities”. On the other hand, he notes “a basic trend since the beginning of the 21st century with the financial transformations of football. »

“For 20 years, we have witnessed recurring conflicts between supporters and clubs about the way of seeing football and of perceiving the organization of a club, its management, details the sociologist at the Ecole centrale de Lyon and member of the National Support Authority. The specificity, this season, is that we had forgotten that a little with the almost two years that we have just spent behind closed doors. In this sense, the challenge had become a little invisible. However, the supporters are even more convinced today than they were before the confinement of their importance, they feel even more legitimate to claim things if they believe that their club is heading in the wrong direction. »

A lack of problematic dialogue

The more the years pass, the more the gap seems to widen between the fans and their leaders. With, everywhere, a common denominator: the lack of dialogue. In Lyon, Jean-Michel Aulas tries at all costs to maintain a link with the corner leaders, but he is the only one. In Paris, the line is completely broken between the two parties. “The management is absent subscribers, we have no return from the club, explains a close friend of the Collectif Ultras Paris. When there is a strike and demands, normally we negotiate and we try to come out on top. There, as the club plays dead, nothing moves, the situation is completely frozen. »

In the opinion of Killian Valentin, it is this radio silence which partly explains this stormy end to the season: “The supporters are not asking for full powers as we have heard here and there, just a little consideration, of listening and therefore of dialogue. By dint of not being heard or being sidelined, their only means of action is to bang their fists on the table. It is understandable and respectable from the moment it is done in a non-violent way”.

It should also be noted that deafness does not only strike leaders. The players too, at least in the big clubs, give the impression of living in a bubble preventing them from understanding the grievances and the anger – legitimate or not – of their fans. After such a mediocre season on the OL side, how can we understand, for example, Karl Toko-Ekambi’s gesture at the foot of the north bend, if not by a total disconnection from what the supporters feel? In Paris, the players seem convinced that the silence of the ultras is only due to the elimination in C1 against Real and they no longer hesitate to complain to the media.

Two camps that no longer understand each other

“There is a real misunderstanding at PSG, notes Nicolas Hourcade. The criticism is much broader, it concerns the club’s sports policy, the very logic of the club’s development and the stacking of stars that does not make a team. And that, in fact, it’s not just the ultras who think it and say it, it’s something that is audible. To reduce their protest to the fact that they are spoiled children is to omit the extent of the problems they highlight. »

In a previous article on the subject, Jérôme Alonzo was saddened to see this giant gap widen over time: “Before, we still had this human side, relatively close to the supporters. We left room for dialogue, we tried to understand the protest, to go talk to them after the matches. Today this is no longer the case. That’s also why people sometimes find themselves less in these guys, because they seem very, very far from them. And this distance has clearly fueled the current protest. »

However, let us agree on one point: this is not a Manichean problem with, on the one hand, the nice supporters and, on the other, the bad managers and players. Certain behaviors in the stands have also been singled out, Lille or Saint-Etienne in particular, where the supporters are accused internally of scoring against their camp when a delicate end to the season is announced. Nor is it a question of saying, as Hourcade explains, “that it is the supporters who must tell the players and managers what to do. »

“But mutual understanding facilitates the de-escalation of tensions,” he concludes. From the moment we accept the idea that supporters are major players in the life of a club – and on this issue, there is now a very broad consensus – we then have to think about the methods of their involvement and the frameworks to be set concerning their field of action. For that, you still have to sit around a table and talk to each other.