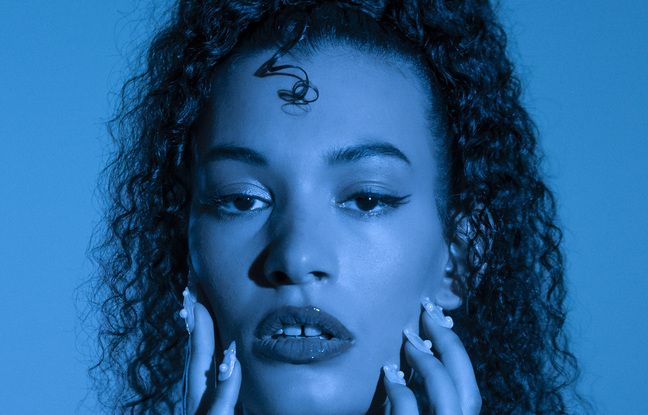 April 7 will undoubtedly remain marked in Jäde’s mind for a long time. That day, the singer had just given a concert, Bastille district, in the Parisian room Badaboom, packed for the occasion. “It was the first date under my name alone! I was moved, happy to meet my audience and it gave me strength for the future,” the artist told us, a few days after the event. That evening, she had played mainly her old songs. Jäde is already the noted author of three projects, Première Fois, Romance, Clichétale and is coming out this Friday, April 15, Météo. Proof that the singer-songwriter start talking about his talent for writing and her universe: she welcomes Oxmo Puccino on the intro and the last track.

“It’s an honor to have him on this project,” she notes. Like him, she navigates at ease in different musical genres that she has listened to a lot (r’n’b, soul, rap) and places writing at the heart of her creative process. The deeply mixed, unclassifiable musical universe of this autodidact is disturbing. If she defines herself as a singer, she knows and masters all the codes of rap, as we can hear in the title Lipstick, in the purest tradition of egotrips, supposed to demonstrate the lyrical skill of MCs. “In my DMs/groupies like the Beatles,” she laughs. Distinctive sign: her head voice, which recalls among other artists Françoise Hardy, one of her influences, or even the British FKA Twigs. It arises like here on very trap productions or softer tracks, like Météo or Numbers.

Talking about the intimate to touch the universal

As far back as she can remember, Jäde has always been creative. For her, music is a story of women and family. She borrows her stage name from her cousin and begins to sing with her sister, who accompanies her on the guitar in the family living room in Lyon. “Then I became interested in video editing, I studied graphic design. I even learned to code, to create sites, always creating with a computer”, she remarks. And this is the music she chose thanks to the social network Soundcloud – she admits to continuing to spend a lot of time on Twitter where she expresses herself without filter.

Jäde meets producers after her arrival in Paris and posts her first titles. The image has also always been very present. “I see myself making films that I edited with my father’s camera,” she recalls. This sense of the well-thought-out clip, this taste for digital art, is also found in certain clips like in Groupie Love.

Intimacy, love, sex have an important place in Jäde’s texts, to the point of challenging certain observers. In 2022, is a woman who sings about her heartache, and talks about sexuality, still shocking? “In any case, I find it strange that I am sometimes asked questions about my motivations for writing on the subject, whereas I am not sure that young male artists are asked,” she notes, while specifying to deliver moments of love, sex, sadness “to touch the universal”.

And always taking the listener further, like the writing work she does on Balançoire, in the pure vein of sensual and colorful French song from the 1960s and 70s. “It’s something / I dreamed of us / upside down,” she admits mischievously in this text that she wanted “playful”. Make no mistake about it: it’s not for nothing that her soft and whispered voice, like a mirror of her personality, she who admits to being “very calm and rather introverted”, also knows how to be frontal. “I made myself beautiful and it’s not your problem,” she slams in Parfaite, a title she shares with American rapper DonMonique, with the mixture of sweetness and fierceness that characterizes her music. The singer plays with the codes of activism (#Menaretrash) in a literally 2.0 feminism. And when we go through his Weather from beginning to end, we realize that Jäde is telling, since it is about disappointment in love, self-confidence, expressing one’s desires, what growing up means. “I don’t know what is holding me back / from throwing myself into the deep end (…) except perhaps his hand”.

With Météo, Jäde has indeed taken the plunge, as it should.