Chamber of Deputies: They endorse preventive detention for attempted femicide

The plenary session of the Chamber of Deputies approved a reform to establish that when a person commits the crime of attempted femicide, they will be subject to preventive detentionand if proven, he will be sentenced to up to 40 years in prison.

It was endorsed by a majority of 453 votes in favor, as well as 24 abstentions by legislators from the Citizen Movement and other groups who considered that applying sentences of up to 40 years to attempted femicide is “severe”, compared to other crimes.

Endorsing the reforms to the National Code of Criminal Procedures, the National Law of Criminal Enforcement and the Federal Criminal Code, the PAN deputy, Paulina Rubio Fernández, lamented that in Mexico 10 femicides are counted a day. 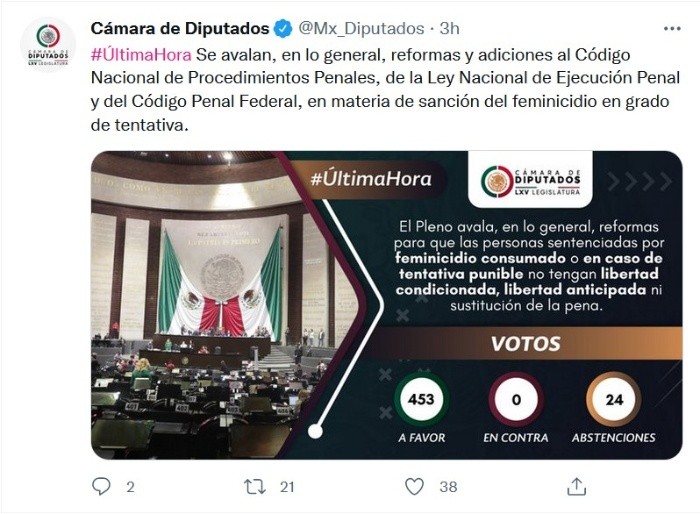 “We are facing a serious security crisis. The ruling will shield this precautionary measure for cases of attempted femicide so that no aggressor goes unpunished, and cancels all pre-release benefits for all those homicides classified as femicides. It cannot be tolerated that they continue increasing the rates of femicides,” he pointed out.

For her part, the PRD member Elizabeth Pérez celebrated the typification of attempted femicide, and questioned that “instead of asking the victims to consider themselves lucky not to have died and thereby re-victimize them, the aggressors should be punished.”

The legislator of the Aztec sun read the testimony of a survivor of femicide:

“I still remember the intense pain of that first stab that stabbed into my stomach, the blood coursing through my body and the cold floor I was lying on.”

“They tell me I’m very lucky, I didn’t die, and maybe they’re right, but they don’t understand the pain it causes me to see the marks on my body, which remind me every day of what happened, the fear I have every night for Adrián to come back and finish what he started,” he said.

The opinion establishes that in cases of femicide committed in a punishable attempt degree, “the judicial authority will impose a prison sentence that will not be less than half and may reach up to two thirds of the maximum sanction provided for the consummated crime” .

The current criminal code contemplates a maximum sentence for femicide of 60 yearsthat is to say that those who comment on the attempt will reach sentences of no less than 30 years and up to 40 years in prison.

It also establishes that “those sentenced for crimes related to organized crime, kidnapping, consummated femicide or in case of a punishable attempt, and human trafficking will not enjoy conditional release.”

Andrea Chávez, from Morena, maintained that in 2007, “in that false war against drug traffickers”, femicides tripled, “and since then the trend has not been reversed.”

The PRI deputy, Adriana Campos, recalled that the current legal framework does not certify the degree of attempt, “which represents a serious act against women, for which it is necessary to guarantee that no aggressor remains free”, while the PAN member, Karina Romero, celebrated the support “for such an important issue for women who fight today not to die tomorrow.”

After its approval, the opinion was turned over to the Chamber of Senators for analysis, discussion and voting.