Gertz remains in public memory as a “vengeful” man: Scherer

The actions of the Attorney General of the Republic, Alejandro Gertz Manero, “has remained in public memory, in that of witnesses and victims, as a suitably biased, eminently vindictive, poisoned man”, The former Legal Adviser of the Presidency, Julio Scherer Ibarra, stated emphatically.

In the complaint of facts that he presented before the Specialized Prosecutor’s Office in Matters of Combating Corruption, against Gertz and four of his collaborators, for the crimes of influence peddling, coalition of public servants, criminal association and those that result, Scherer Ibarra pointed out that today the “enemies” of the head of the FGR are the target of justice, his justice.

Proof of this, he stated in the 15-page document received at 11:00 a.m. on April 22, are the investigations, “fabrications”, persecutions and investigations that he initiated against his in-laws, scientists, characters related to the UDLAP , of women, companies, entrepreneurs and other people who are alien to their vision or their interests.

“For not serving him one day, I myself found myself on the path of revenge that defines and gives meaning to the life of Dr. Alejandro Gertz Manero. The truth is the first breath of justice: weeks ago I decided to make public the harassment and illegal persecution that the Attorney General of the Republic decided to undertake against me; today it’s time to take my complaint to the judicial sphere”.

In the case of Laura Morán Servín and Alejandra Cuevas Morán, Gertz Manero’s sister-in-law and niece-in-law, she stated that at a meeting in October 2021 the prosecutor asked her to apply to the Federal Judicial Branch (PJF) for the denial of the amparo lawsuits that those then accused of the murder of his brother Federico Gertz filed against the arrest warrant against him.

The foregoing, he said, “knowing that what he was requesting of me was criminal, which I refused due to the evident illegality of the request.”

He reiterated that since he refused to be an accomplice to the crime of influence peddling in the aforementioned case, prosecutor Alejandro Gertz Manero initiated various investigations against him and his family. arising from complaints filed by lawyers Paulo Diez Gargari, Juan Ramos Collado Mocelo and Ángel Martín Junquera Sepúlveda, among others, for the crimes of influence peddling and extortion.

“Of course, I categorically deny having committed any crime. It is a completely false accusation.”
He specified that the Specialized Prosecutor in Competence Control, Juan Ramos López; the Internal Affairs Prosecutor, Adriana Campos López; the director of Special Affairs of the FGR, Manuel Granados Quiroz, and the Agent of the Public Ministry, María Eugenia Castañón Osorio, “also carry out an investigation regarding years prior to his work as head of the Legal Department of the Presidency of the Republic”.

“From the shadows, various members of my family have been included in these investigations, denying me access and the right to defense, due process, for facts that are false and that serve a personal revenge of the Attorney General of the Republic,” he charged. 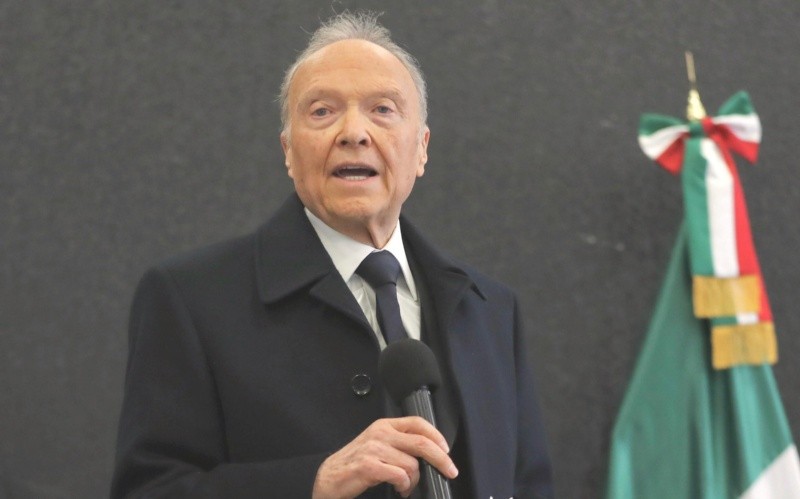 Gertz, a key player in legal matters at UDLA

Scherer Ibarra affirmed that Gertz Manero has also been key in the legal affairs of the University of the Americas (UDLA), an institution around which, he referred in the complaint, revolve multimillionaire interests of the prosecutor who has disputed from his position at the head of the FGR.

He recalled that together with his closest collaborator, Juan Ramos López, Gertz Manero reopened in June 2020 an old investigation against members of the UDLA board of trustees, who lost years ago in his capacity as rector and legal representative of the institution, respectively.

“Pretending to own the institution, Dr. Alejandro Gertz Manero had sued UDLAP for the name of the university and its logo, which was declared inadmissible since the Puebla university existed before the Gertz family appropriated UDLA.”

For this matter, added Scherer Ibarra, Gertz Manero maintains another personal lawsuit against four officials of the Mexican Property Institute (IMPI). “The conflict of interest has been such that the Supreme Court of Justice of the Nation is again analyzing attracting another case that involves the particular matters of the Attorney General of the Republic.”

The case of the scientists

Likewise, the former Legal Counsel recalled that the head of the FGR tried to imprison 31 scientists after the community demonstrated against his incorporation as a level III investigator in the National System of Investigators, since he did not meet the requirements, in addition to being accused of plagiarism.

He mentioned that since he took office, prosecutor Alejandro Gertz Manero has been legal advisor to Gabriel Alarcón Velázquez, accused years ago of having defrauded his family by appropriating an inheritance of hundreds of millions of pesos.

“It has been published that this client has paid fortunes in money and real estate to the Attorney General of the Republic and that they share a private plane that Dr. Alejandro Gertz Manero finances with resources from the UDLA.”

From the case of Emilio Lozoya, Julio Scherer Ibarra affirmed that the former director of Pemex lived a privileged confinement and that he has been offered different opportunity criteria to leave prison since November 2021.

“How far is a man going to be allowed to go who has no constitutional checks and balances and who intimidates all the alternate powers?”

“How long can illegality prevail in the name of the Mexican State?” questioned the former Legal Adviser of the Presidency of the Republic.