Tunnels and basements, last pockets of Ukrainian life and resistance

As of Monday, no agreement has been reached between Moscow and kyiv to establish a humanitarian corridor from the Azovstal factory in Mariupol. One more day during which nearly 1,000 Ukrainian civilians and fighters will have to remain holed up in kilometers of galleries of this metallurgical complex besieged by the Russian army since the beginning of March. In Kharkiv, it is in underground car parks that several families have been entrenched for two months. “We breathe a lot of dust. I don’t like it, I want to breathe fresh air,” Lilia, 8, a refugee in what she calls “the bunker,” told AFP.

For Lilia and like for the other inhabitants of many cities in Ukraine, car parks, cellars or subway corridors have become everyday settings. Proof of this is this video shot in the Azovstal tunnels in Mariupol recently aired. We see women and children with pale complexions, installed in the underground galleries of the complex since the beginning of March. “We can play with the phone, but we want to go home to see the sun,” says a little girl, while a mother begs: “get us out of here, we want to breathe some fresh air.” » 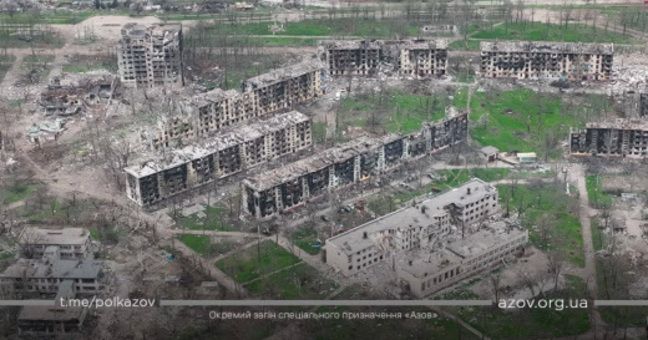 The Azovstal factory besieged by the Russian army and in which more than 1,000 civilians live entrenched. – EPN/Newscom/SIPA

Little by little, the inhabitants have therefore recreated a real life underground. In the parking lot of Kharkiv, the first days, “it was very, very cold,” said Lilia again. Conditions were “hard at first”, and then “we got used to it”, added 14-year-old Alex. “The first day here, there were only two benches. Then we brought everything: blankets, pillows, dishes,” said Alina, 9. Like the other children on site, after breakfast, she takes online lessons every morning on Zoom.

It is possible to last “for a few months”

“It is likely that the Ukrainians came down with enough reserves to live for a while,” explains Vincent Desportes, professor of strategy at HEC and SciencePo, to 20 Minutes. In Azovstal, it would thus be possible to hold “for a few months”, assures us Alexander Greenberg, referring to Ukrainian reports. The analyst at the Jerusalem Institute for Security and Strategy (Jiss), adds that the lack of oxygen or light is not a problem since the “catacombs were built as an integral part of this factory”.

These resistance fighters, both military and civilian, would therefore not be about to be dislodged by the Russian soldiers who finally decided to besiege the Azovstal metallurgical complex, rather than attack it. “The factory is gigantic: miles upon miles. It would take thousands of tons of ammunition to bomb it,” analyzes Vincent Desportes, author of the essay. Aim for the Summit.

It is for this reason that Vladimir Putin opted for a longer, but simpler solution: “Encircle Azovstal and wait calmly for a few more months, until the resisters’ supplies run out,” says Alexander Greenberg. “It’s a city within the city, and there are several underground levels dating from the Soviet period, it’s not possible to bomb from above, you have to clean underground. It will take time, ”Eduard Bassurin, representative of pro-Russian separatist forces in Donetsk, told AFP in early April.

It’s hard to say who will emerge victorious from this showdown, although the history of warfare is full of similar defense strategies underground. “The defenders have always sought to protect themselves from the assailant behind barricades and trenches, in caves and underground passages,” recalls Vincent Desportes. And the strategy professor at HEC recalls this episode of the First World War, during which the French and Germans tore each other for months in the Caverne du Dragon, in Aisne.

BILD published a diagram showing how life works on the 6 underground floors of the plant and thanks to which the fighters continue to hold the line.

In Azovstal, the refugees have every chance of overcoming the patience of the Russians. According to the Nexta media, ammunition and food are stored between the second and fourth floors, with the civilians. On the other hand, “the bunker has an autonomous electricity and water supply system”, specifies the media. Finally, if the best bunkers are those deep underground, it is “because a shell pierces the ground only up to two or three meters deep”, specifies the professor of strategy.

“Vary the opponent’s harassment points without being spotted”

On the other hand, one of the great interests of tunnels is that they allow you to move without being seen by the enemy. At the Azovstal factory, sources evoke more than 20 kilometers of underground corridors, up to 30 meters deep on six floors. “We can therefore vary the points of harassment of the opponent without being spotted”, emphasizes Vincent Desportes again. A strategy notably used by Hamas and Hezbollah to fight Israel. “Nevertheless, these tunnels were deliberately dug for military purposes. They are shorter and intended to house only a few hundred fighters”, tempers Alexander Greenberg.

A new failure to set up an evacuation corridor for civilians on Monday also remains worrying, as a commander of the 36th brigade of the Ukrainian national navy, injured people “without medicine or medical assistance would be found in these tunnels.