Le Pen in the lead in Hauts-de-France, Corsica and PACA 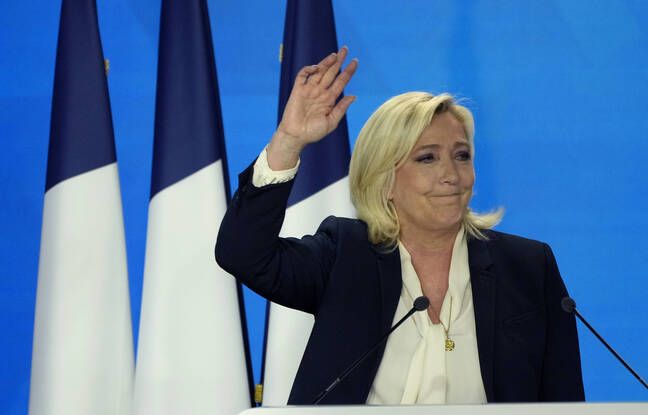 By detailing the results of the second round of the presidential election, it appears that, as at the national level, Marine Le Pen’s progress is clear in the regions. In Metropolitan France, the candidate of the National Rally thus comes first in three regions out of thirteen, while she did not dominate any in 2017. This time, Marine Le Pen makes more than 50% in Hauts-de-France, in Corsica and Provence-Alpes-Côte-d’Azur.

The relationship is reversed in Hauts-de-France

Unsurprisingly, Marine Le Pen came out on top on Sunday in her stronghold. She is ahead of Emmanuel Macron in four of the five departments of Hauts-de-France. In the region as a whole, the candidate obtained 52.13% of the vote, against 47.87% for her opponent. This result confirms that of the first round. She was already leading the dance on April 10 with 33.34% of the votes.

The ratio has therefore reversed since the second round of 2017, where she came in second place with a score of 47.06%, Emmanuel Macron winning with 52.94% of the vote. In total, the RN candidate won 176,586 votes in five years.

Marine Le Pen’s lead is particularly important in Aisne – stronghold of the president of the Hauts-de-France region, Xavier Bertrand – where she obtains six out of ten votes. She won 57.49% of the votes in Pas-de-Calais, against 42.51% for Emmanuel Macron, and also won, in smaller proportions, in Oise and Somme. The LREM candidate, on the other hand, is ahead of Marine Le Pen in the North (52.85%), historic breeding ground for the left and the most populous department in France. He notably obtained 76.56% of the votes in Lille, where the socialist mayor Martine Aubry had announced her intention to vote for him.

The two candidates also largely won in their strongholds in Pas-de-Calais, where they voted on Sunday: 78.43% of the votes for Emmanuel Macron in Le Touquet, 67.15% of the votes for Marine Le Pen in Hénin -Beaumont. The president also wins in his hometown of Amiens (67.86%).

Marine Le Pen now has the advantage on the island of beauty. Corsican voters have indeed placed him well ahead on Sunday with 16 points ahead of the president, in a poll marked by a high abstention rate. In 2017, Emmanuel Macron came third in the first round, but won in the second round with 51.48%.

But it is above all the abstention that most marks this second round. Its rate is 39.14%, i.e. three points more than in 2017 and more than 10 points above the French average. Up two points from the first round (37.24%), it could be explained by the call for the strengthening of the boycott of the election launched by the two independence parties, Core in Fronte and Corsica Libera, however in the minority. to the Assembly of Corsica.

The RN candidate wins for less than 1% in PACA

Large cities for Emmanuel Macron, villages and rural areas for Marine Le Pen: this is the lesson of the ballot in Provence-Alpes-Côte-d’Azur. After his grand slam in 2017, the president was this time overtaken in three of the six departments of the region, the candidate of the RN winning in one breath at the regional level. Victorious with 50.48% of the vote, six points more than five years ago, Marine Le Pen is on the other hand behind in Marseille, Nice, Avignon and even Toulon, the only metropolis where she arrived first on April 10.

In the lead in five of the six departments of the region in the first round, Hautes-Alpes excepted, the candidate of the National Rally finally won the Var (55.10%), the Vaucluse (52.00%) and the Alpes-de- Haute-Provence (51.45%), with increases of six to ten points in five years. In the Vaucluse, one of the poorest departments in France, where Emmanuel Macron came out on top in 2017 with 53.45% of the vote, this time it was Marine Le Pen who won the day by signing dizzying scores of more than 60% in many rural communes. In Bédarrides, a town of 5,000 inhabitants in the heart of a wine-growing area, hit by an unemployment rate of 11%, it thus peaks at 68.85%.

Macron catches up in the Bouches-du-Rhône

Emmanuel Macron, on the other hand, unsurprisingly wins the city of Avignon which, after having placed Jean-Luc Mélenchon in the lead in the first round, voted more than 62% for the outgoing president. In Forcalquier, stronghold of deputy and ex-Minister of the Interior Christophe Castaner in the Alpes-de-Haute-Provence, the head of state was also ahead of Marine Le Pen, by more than 19 points. In the first round, he was overtaken by almost 12 points by Jean-Luc Mélenchon.

Preceded in the first round, the president-candidate has caught up in the Bouches-du-Rhône (52.08%) and the Alpes-Maritimes (50.13%). But here again he signs scores much lower than those of 2017, with a decline of five points each time. Victorious in Marseille (59.84%), the Head of State also fell sharply there, after winning with 64.42% of the vote in the second round of 2017.

In Nice, a city led by Christian Estrosi, ex-LR past in the presidential camp, he obtains 55.39%, also down five points compared to 2017 (60.14%). Emmanuel Macron finally won in the Hautes-Alpes, the only department in the region which had not placed Marine Le Pen in the lead in the first round. With 55.06% of the vote, however, he lost nine points compared to 2017.