No, the ISF did not scare away the rich, as Emmanuel Macron says

“The real rich, they were leaving! Asked this Friday morning, on France Inter, about the abolition of the Solidarity Tax on Wealth (ISF), which his opponent in the second round, Marine Le Pen would like to reinstate, Emmanuel Macron defended his reform which entered into force. on January 1, 2018.

“I did what I promised to do, it was in my project”, defends himself @EmmanuelMacron on the ISF. “We created activity and, on the richest, I put an end to a hypocritical system.” #le79Inter # Elysée2022 pic.twitter.com/54tPPxGdTp

The ISF, created in 1989, affected all people whose assets exceeded 1.3 million euros. In 2017, the ISF brought in just over 5 billion euros to the state.

Accused of scaring away the rich and harming investment, it was replaced in 2018 by the real estate wealth tax (IFI).

Let’s say it right away, the number of people who left France because of the ISF is very difficult to determine since the reason for their departure is never asked of them.

However, according to a report prepared for the Court of Auditors in 2017, based on data from the General Directorate of Public Finance, the number of ISF taxpayers leaving the national territory in 2014 was 784. According to this same report, this share represented only 0.24% of households liable to ISF. ‘ISF. For information, in 2017, 358,000 households were subject to the ISF. 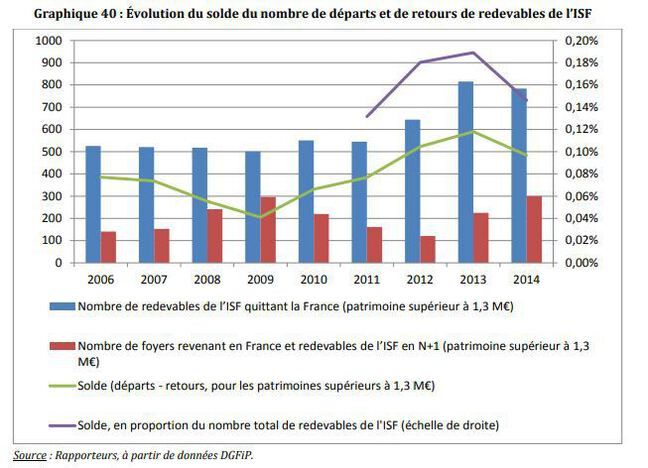 Extract from the report for the Court of Auditors. – Screenshot

The peak of departures took place between 2006 and 2009, a period during which the tax threshold was “only” 800,000 euros, which represented only 0.14 to 0.17% of households liable for ISF. We are therefore far from fiscal haemorrhage.

Above all, these figures do not take into account households that settled or returned to France over the same period and who could also be subject to the solidarity tax on wealth. According to the economist Thomas Porchernearly 300 people a year returned to France each year.