How “20 Minutes” embarked with Thomas Ruyant 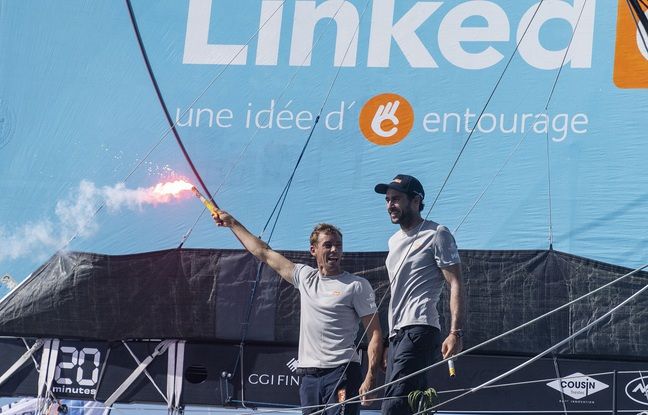 Smiles, raised arms, a cracked smoke bomb, a champagne shower and the 20 Minutes logo. But what is the sticker of your favorite newspaper doing on the boom of Thomas Ruyant, winner of the Transat Jacques-Vabre, on November 25, 2021 in Fort-de-France, alongside Morgan Lagravière on the imoca LinkedOut? Know that since 2019, 20 Minutes has been sailing on all oceans with the Dunkirk skipper’s boat.

The meeting between your press title and the navigator is banal: the monitoring of its sporting news by our journalists from the Lille office of 20 Minutes, in particular the Vendée Globe 2016 in which Thomas Ruyant participates with the boat Souffle du Nord. And then things accelerated with the construction of his own boat to participate in the Vendée Globe 2020. “We had a different sporting project for which we were looking for a media relay, explains Thomas Ruyant. 20 Minutes is a beautiful house, a newspaper that everyone knows with a known and recognized brand image. »

A meeting in Paris, email exchanges and a partnership is found: media coverage for the 2019 Transat Jacques-Vabre in exchange for visibility on the foiler with the 20 Minutes logo on the mast and cockpit. “We set up something nice that is not done in the sailing world. It allows to go further in the subjects, it gives a proximity. So much so that a journalist (we will not name his name but we will link his article to you) took baths of water on his head and returned his breakfast during a sea trip off Lorient.

In the deal, the two signatories agree on a priority given to the other party but no control over what is written or compulsory media exclusivity. And if this partnership is today the winner of a magnificent transatlantic race. He had a chaotic start with a break in the autopilot off Etretat when the Transat Jacques-Vabre 2019 had just started from Le Havre. A crazy comeback later, Thomas Ruyant, with Antoine Koch, finished 4th. If the boat has changed its name in the meantime – from Advens Cybersecurity to LinkedOut, when the group specializing in cybersecurity decided to put forward a societal project – the skipper and 20 Minutes continue the adventure in 2020 for the Vendée Globe and a solo round the world race finished in 6th place.

The links and trust created make it possible to renew the partnership for the Transat Jacques-Vabre 2021. “We know each other well now, underlines Thomas Ruyant, that allows more constructed, more advanced subjects. “And to savor a common victory in Martinique, on November 25th. But let’s face it, all the credit for choosing the right course or pushing LinkedOut to over 30 knots goes to Thomas Ruyant and Morgan Lagravière.

And “as the story is going well”, according to Thomas Ruyant, the imoca will keep its 20 Minutes stickers for the Route du Rhum 2022 which starts from Saint-Malo on November 6th.