Veracruz: Javier Duarte denies, “for the hundredth time”, that the ranch in Valle de Bravo is his

Javier Duarte, former governor of Veracruz imprisoned in the North Prison, He denied “for the hundredth time” that he owns a ranch located in Valle de Bravo, State of Mexico.

Through a Twitter account, Duarte clarified that the ranch has never been his propertyafter the media pointed out that an alleged “forename” seeks to recover it. 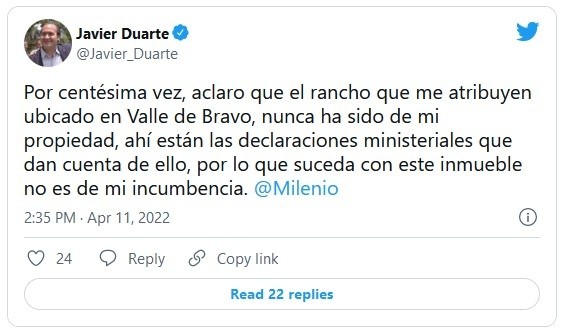 “For the hundredth time, he clarified that the ranch that they attribute to me, located in Valle de Bravo, has never been my property, there are the ministerial declarations that account for it, so what happens to this property is none of my business,” Duarte wrote.

In March 2021, the Government of Veracruz announced that it would donate to the Secretary of National Defense (Sedena) 66 percent of the luxurious Las Mesas ranch that was seized from former Governor Javier Duarte de Ochoa.

The governor of the state, the morenista Cuitláhuac García Jiménez, asked Congress for authorization to dispose of part of the ranch located in Las Mesas, municipality of Valle de Bravo, in the State of Mexico, free of charge.