Champions Cup: two Franco-French duels, shocks for Toulouse, Clermont and Montpellier … What you need to know about the round of 16

Forget the puzzle of the preliminary phase, the Champions Cup is back for its final phase. After the first months of an improbable European season, place in the round of 16, from Saturday April 16. At this stage of the competition, a strong French contingent will be represented with seven clubs including two clashes: Toulouse will challenge Ulster on Saturday (4:15 p.m., to follow on France 2 and france.tv) when Clermont will be opposed to Leicester, Sunday (4:15 p.m., to follow on France 2 and france.tv). Racing 92, Montpellier, Stade Français, La Rochelle, Bordeaux-Bègles are also in the running. A scenario hard to imagine at the start of the year.

Two Franco-French duels and shocks on the program

Fans of Racing and Stade Français have reason to rejoice. In three weeks, three derbies: first in the Top 14 (53-20 victory for the Racingmen) then with the two matches of the round of 16, on April 9 and 17.

Like the Ile-de-France residents, they too are inseparable. After clashing, both on the field and on the coaches’ bench, last Saturday in the Top 14, Stade Rochelais and Union Bordeaux-Bègles will face each other in triptych style. Respectively finalist and semi-finalist of the last edition, the two teams have great ambitions again this season, despite recent disappointing performances in the French championship. 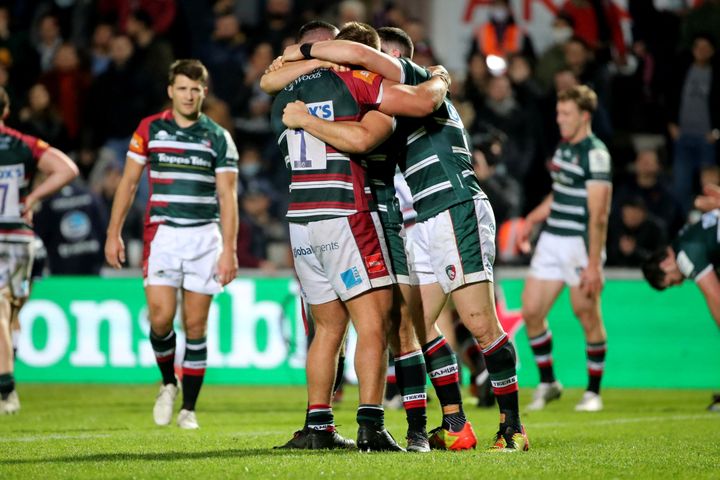 Leicester players, all to their joy, travel to Clermont on Sunday in the round of 16 first leg of the Champions Cup. (ROMAIN PERROCHEAU / AFP)

For the rest, the leader of the Top 14, Montpellier receives the Harlequins, third in the English championship while the first of this same championship, the Leicester Tigers, will receive Clermont. After an exceptional start to the season, the players of the Midlands dominate the Premiership and have won all their group matches, winning in particular on the lawn of Chaban-Delmas. Finally the defending champion, Stade Toulousain welcomes Ulster, second in their Rugby United Championship group. During the group stage, the Irish have twice dominated the Clermontois and the Saints of Northampton.

The extension of a truncated group stage

For two seasons, the EPCR has decided to innovate. To even change everything. Exit the five hens of four and its readable and understandable format. Make way for the two groups of twelve, where all the teams do not meet and do not play the same matches. To stop there would have been too simple. Since this season, the Round of 16 has been played as home and away matches. But not quarters or halves.

Faced with Covid-19 and the different health protocols specific to the countries, even the closing of borders, the first months of the competition gave work to the EPCR, the body in charge of the organization of the competition. A total of eleven group stage matches have not been played due to the pandemic. Depending on the situation, the defeat on the green carpet was attributed to the team affected by the coronavirus, or else draws and goalless matches were pronounced. Decisions widely contested by the clubs.

For example, Racing 92 signed two bonus victories (28-0) on green carpet. She therefore only played two matches, out of the four initially planned. With La Rochelle, it will be one of the only two French teams which will be able to receive in the quarter-finals, in the event of qualification. Union Bordeaux-Bègles, for its part, pocketed a victory and a draw “thanks” to the Covid. For his part, the Toulouse title holder benefited from two matches concluded on green carpet, with a draw and a defeat. With a seventh place far from his ambitions.

A new format for the eighth

It is therefore the only round of this final phase which will be played in the first leg (this weekend) and return (next weekend). The eighth will deliver their verdict after two meetings and the winner will be “designated on the basis of the cumulative scores of two rounds”. Field points and bonus points therefore do not apply. Thereafter, from the quarter-finals, the posters will be played on a dry match.