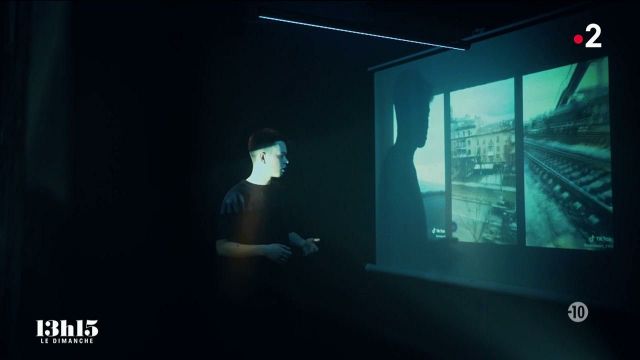 Between information and misinformation, the war between Russia and Ukraine is also being played out live on social networks. Civilians analyze the images circulating, sometimes bringing to light operations of intox. Their decryptions are even appreciated by the military… Extract from the magazine “1:15 p.m. on Sunday” of April 3, 2022.

Russia prepared opinion on social networks before the invasion of Ukraine on February 24, 2022 at dawn. She has constructed a narrative in which the Russian speakers of Donbass appear as victims of the Ukrainian regime. Three days before the entry of the Russian army, a video signed by a pro-Russian group is published in which it is said that “Ukrainian militiamen continue to carry out terrorist attacks which directly target the civilian population of the Republics of Donbass” . This commentary illustrates footage showing a 34-year-old downed man who “was injured by shrapnel” from a 120mm mortar.

This scene of the aftermath of the attack seems filmed in panic with a mobile phone. We see an injured victim being treated. The voice of the commentary explains that an investigation was carried out immediately after the attack by a pro-Russian soldier in uniform who said to the camera: “Today, Monday, February 21, Ukrainian military formations again bombarded the territory of the Russian of Luhansk. Following the shooting, a resident lost his left leg. He received first aid on the spot and was immediately transferred to the hospital.” And the victim is then presented on his hospital bed as if he had just been operated on…

“Yes, we participate in the information war”

A member of the medical staff at the hospital said the man lying on the bed, part of his left leg amputated and with a bloody bandage, is in “critical condition”. Internet analysts from open sources have found the video in question… and everything is false. It’s a staging. The man who allegedly lost his leg was in fact already amputated before the so-called Ukrainian attack: the metal attachment of his prosthesis is indeed visible in the images. These decryptors have already found eight other pro-Russian propaganda videos intended to feed social networks.

“It was observed that the Russians wanted to make believe that the Ukrainians were the aggressors and the Russian troops of the peacekeeping forces positioned near the border, explains the analyst in open sources Benjamin Strick to the magazine ’13:15 on Sunday’ (replay). Under the pseudonym “Coupsure”, the open source analyst Benjamin Pittet is followed by his side by 170,000 subscribers. His contributions on this conflict are taken very seriously by the military: “We have the chance to having networks like that that have been formed over time and that bring us information. I can’t even imagine depriving ourselves of these very precious sources. It’s very powerful”, recognizes Jean-Paul Paloméros, former Chief of Staff of the Air Force. The young OSINT (Open Source Intelligence) analyst specifies: “My work is live, all the everyone can see it. Yes, we are participating in the information war. We can have a positive role and give the truthful facts.” What is the difference between him and an intelligence service? “I do this from my sofa…”