Postpone retirement to 65? We decipher this campaign proposal from Emmanuel Macron and Valérie Pécresse 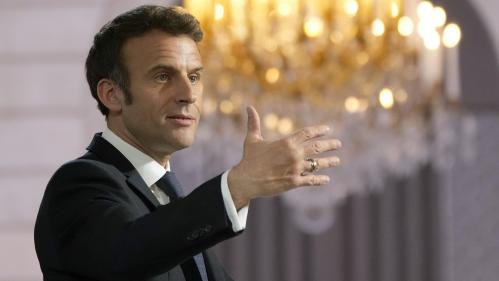 It was one of the major reforms wanted by Emmanuel Macron, abandoned because of the Covid-19 pandemic. If he is re-elected, the candidate president has promised to push back the legal retirement age to 65, instead of 62 currently. If the contours of the proposal are relatively undefined, the latter should take over the bulk of the reform planned for 2019. In addition to increasing the retirement age, the candidate wishes to abolish the special schemes and introduce a minimum pension of 1,100 euros. If adopted, the transition to 65 years will be “gradually” until 2032, said Richard Ferrand, President La République en Marche (LREM) of the National Assembly.

The project, explosive, does not collect the approval of the French men and women: a survey by the Ipsos Institute for the Landoy think tank reports that 60% of them would like a legal age of departure “between 60 and 62 years old “. On the left, most candidates do not wish to reach the starting age of 62; some, like Jean-Luc Mélenchon and Fabien Roussel, even want to lower it to 60 years. There is only Valérie Pécresse to agree with the outgoing president. Eric Zemmour proposes to go to 64 years, a proposal initially defended in 2019 by Emmanuel Macron.

On what basis is this reform proposal based, what would be its effect on the employment rate of seniors? Franceinfo answers the questions that arise.

1How do Macron and Pécresse justify their proposal?

The first argument put forward by the supporters of Emmanuel Macron is financial. “It turns out that the pension system is a system which is unbalanced and which loses money each year”, affirmed, on March 16, Olivier Véran, the Minister of Health. Pushing back the retirement age to 65 would save 7.7 billion per year by 2027 and 18 billion euros from 2032, according to an estimate by the Institut Montaigne, a liberal think tank, reported by Les Echos. A way, according to Richard Ferrand, to “work more” to “produce more wealth in order to finance our social model, our education, our health system, our armies”.

To the financial argument is added, according to LREM and the Republicans, that of life expectancy. “We will live longer, we will have to work longer”, estimated Valérie Pécresse on RTL to defend his proposal. A justification similar to that of Nicolas Sarkozy, in 2010when raising the minimum retirement age from 60 to 62 years.

2Is the funding of pensions in deficit?

The answer to this question depends on the temporality in which we place ourselves. The pension system suffered a deficit of almost 18 billion euros in 2020, according to a report from the Pensions Orientation Council (COR)published in June 2021. As explained in an article by the World, this drop in revenue is mainly linked to the Covid-19 pandemic and “the contraction in business activity”. The pension system should thus return to equilibrium by 2030, notes the COR in its report.

A conclusion that pushes Julie Landour, sociologist at PSL Paris-Dauphine University, to qualify the financial justification as “ideological”. “The reforms of 2003 and 2010 [qui a repoussé l’âge légal de départ à 62 ans] focused precisely on financing issues, explains the researcher to franceinfo. Pension spending should not exceed 14% of GDP now. We do not yet see the effects, because it is a visible process over the long term.” Thus, despite “the gradual aging of the French population”, “the changes in the share of pension expenditure in GDP would remain on a controlled trajectory on the horizon of the projection, that is to say 2070”, underlines the COR.

“We know that the system is viable, because the previous reforms provided for a reduction in the replacement rate [c’est-à-dire le pourcentage de votre dernier revenu que vous conserverez à la retraite]which will drop from 50% currently to 37%”, explains the researcher. In other words, the amount of individual pensions will decrease over the years as the number of retirees increases.

3Should we raise the retirement age as life expectancy increases?

In view of these data, it would therefore be logical to push back the retirement age, argue the supporters of retirement to 65 years. But others, like Jean-Luc Mélenchon, point to the figures behind the INSEE averages. An article from Release, based on data collected by the institute, thus underlines “that a quarter of the poorest have already died at retirement age”. “Executives have a set of resources that allows them to live longer and in better health”, confirms Julie Landour, who recalls that life expectancy “in good health” is “63 years for men and 64 years in women”.

With the establishment of “a universal regime” and the abolition of special regimes, no Frenchman could therefore leave before the age of 65? Not necessarily, if we are to believe the supporters of Emmanuel Macron, who promise to take into account the arduousness of the work. Olivier Véran thus assured “unambiguously” that a “caregiver will not work until this age”.

In the current system, a device, the personal prevention account, allows you to leave up to two years earlier in the event of a difficult job. “Corn an order from 2017 has largely revised the thresholds from which one can claim a difficult job, and certain criteria, such as that of heavy loads, have been removed, explains Julie Landour. This means that 40% of the workers previously concerned by these criteria no longer have the right to do so.

4Can retirement at age 65 improve the employment rate of seniors?

This is what Emmanuel Macron assured, interviewed by France Bleu. “The more employers know that you are retiring at 62, the less they hire you,” he explained to justify his measure. A transition to 65 can “give a signal to companies” and “encourage them to hire more than 55-65 year olds”, judges Monika Queisser, pension specialist at the Organization for Economic Co-operation and Development (OECD).

In France, “the employment rate of seniors (55 years and over), although constantly increasing, remains low in comparison with other European countries, in particular among those over 60”, explains a note from the Ministry of Economy. At the end of 2019, the employment rate of 60-64 year olds was 34% in France, compared to 63% in Germany and 47% in the euro zone. One of the explanatory factors for these figures is the lack of measures taken to integrate seniors into the labor market.

“Ultimately, the question is not so much the starting age as how we allow people to age as best as possible in the workplace,” says Julie Landour. The researcher points the finger at other European countries, in particular “Sweden”, which have set up “progressive retirement schemes with part-time use”. The question of “training seniors” is also important, notes Monika Queisser, citing the example of Germany, which frequently accompanies people at the end of their careers towards more suitable positions.