War in Ukraine: How a simple sentence about Putin parasitized the end of Biden’s European tour 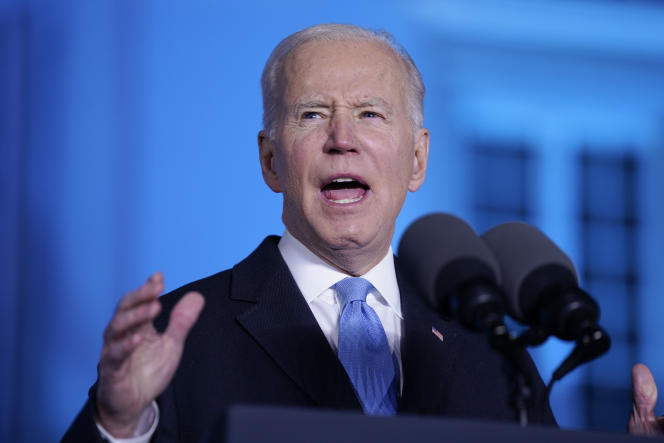 It was to be the apotheosis of a dense and successful two-day visit to Poland. The speech delivered by Joe Biden, Saturday March 26, at the Palace of the Kings in Warsaw, had been polished, neat, to make it a milestone in his foreign policy. This address to the Poles and to Europeans in general was an opportunity to emphasize the consistency of the American approach to the Russian invasion of Ukraine: drastic economic sanctions against Moscow, arms deliveries, refusal of a direct military commitment, absolute unity among allies.

And then a sentence fell, improvised, just before the American president retired. “For the love of God, this man cannot stay in power. So spoke Joe Biden of Vladimir Putin.

Read also: Article reserved for our subscribers In Poland, Joe Biden salutes a country at the forefront of support for Ukraine

The tenant of the White House had just parasitized his own speech, even his disciplined political line since October 2021 with regard to Moscow. A line that aims to be both realistic – on American limitations – and intransigent, based on economic pressure and the cohesion of the Western bloc. A line embodied by two men, the Secretary of State, Antony Blinken, and the national security adviser, Jake Sullivan, who have never yet been found lacking in oratorical mastery.

The Warsaw speech had, however, been very skilful. Joe Biden spoke of the long and bitter struggle in defense of freedom, touching his audience with relevant historical references. He had denounced the Kremlin’s lies, hailed the extraordinary mobilization of the Poles in favor of the refugees, assured the solidity of Article 5 of NATO, a “sacred obligation” of collective solidarity in the event of a threat against one of his members.

Also read the column: Article reserved for our subscribers “Joe Biden wants to consolidate Europe in a world with a dangerously unstable balance”

But the fateful sentence, barely uttered, triggered an avalanche of comments and questions. Joe Biden’s own advisers were forced to hastily clarify “what the president meant”. No, the latter would not have dreamed aloud of a change of regime in Russia. No, Washington had not just adopted, in broad daylight, a strategy of aggressive destabilization of the Kremlin. “What the president meant was that Putin cannot be allowed to exercise power over his neighbors or the region,” it was explained.

Sunday, Antony Blinken also sought to raise the bar. While traveling in Israel, he pointed out: “As you have heard us say repeatedly, we have no regime change strategy in Russia, or indeed anywhere else. In this case, as in all cases, it is up to the people of the country in question to decide. It is up to the Russian people to decide. »

You have 59.63% of this article left to read. The following is for subscribers only.