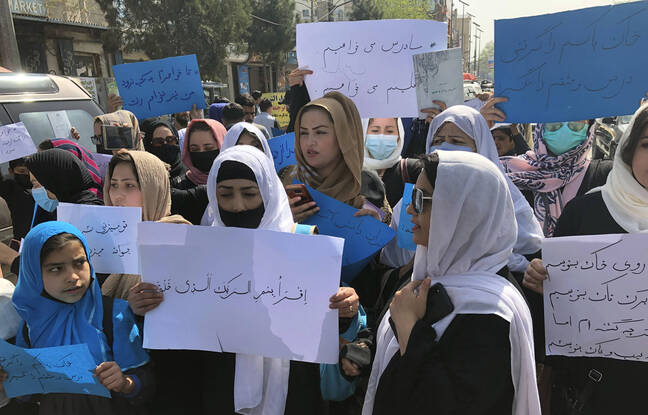 Associations for the defense of women’s rights in Afghanistan want to organize demonstrations if the Taliban do not reopen next week secondary schools for girls, closed on Wednesday after reopening, they announced on Sunday. “We call on the authorities to reopen schools for secondary school girls within a week,” activist Halima Nasari said at a press conference in Kabul organized by four Afghan women’s rights groups.

“If the Islamic Emirate (name of the Taliban regime) does not do this, we will reopen the schools ourselves and we will organize peaceful demonstrations in the country until we obtain satisfaction,” she warned. “People can no longer accept such oppression. We do not accept any justification from the authorities” regarding the closure of schools, added the activist.

A demonstration has already taken place

On Saturday, around twenty women and girls demonstrated in the capital to cries of “open the schools!” “. The demonstration lasted less than an hour, before being dispersed by armed Taliban. Islamist fundamentalists, in power since August 2021, reversed their decision on Wednesday to allow girls to study in secondary school, just hours after the long-announced reopening.

The announcement, as brutal as it was unexpected, took place when many students had already returned to class. The Ministry of Education did not give a clear explanation for its about-face. “Our policy is not against girls’ education,” Taliban spokesman Suhail Shaheen told AFP on Saturday.

A multitude of restrictions on women

According to him, “there are some practical issues” that “have not been resolved before the scheduled opening deadline” on Wednesday. The return of girls to secondary school followed that of boys, as well as girls but only in primary school, who had been authorized to resume classes, two months after the capture of Kabul by the Taliban.

In seven months of governance, the Islamists have imposed a multitude of restrictions on women. They are barred from many government jobs, restricted in how they dress, and banned from traveling alone outside their towns. They also arrested and detained several activists who had demonstrated for women’s rights. Saturday’s protest was the first in many weeks to take place in the capital.