As if the Girondins de Bordeaux needed that. While they spin each day of the championship a little more towards the L2, they have had to do since the last match against Montpellier (0-2) with a supposed case of racism within the first team. During this meeting, the Ultramarines, the largest group of supporters, accused Benoit Costil and Laurent Koscielny of racism. The latter no longer part of the first team since January. He is now a club ambassador.

Very serious accusations made during the match and then reiterated on social networks by the Ultramarines. One of the leaders of the group had also had an altercation with the Bordeaux goalkeeper at halftime of the match in a very tense sporting context. Since then, the two players have formally denied these accusations as well as some of their teammates. Benoit Costil has already decided to file a complaint according to information from 20 Minutes,

Where do these accusations come from?

These allegations come from a former and a current employee of the club. People very close to the first team since they have worked as a security guard and / or steward around it in recent years. According to their (anonymous) testimonies collected by South West, they accuse Benoit Costil and Laurent Koscielny “of clearly racist insults and denigrating remarks aimed at several players of color in the workforce, coupled with several acts aimed at mocking the origins or religion of teammates”. The facts would have occurred at Haillan and during internships over the past two seasons.

These two people would also have had a fairly significant financial dispute with the players and in particular the executives of the workforce at the end of last season. The latter refusing to give them gifts after keeping the club in Ligue 1. We do not know at this stage if the two cases are linked. For their part, the Ultramarines, maintain their words via one of their spokespersons, Florian Brunet, about possible evidence: “It is in the hands of journalists. They are conclusive and detailed and will be embellished. Tongues will loosen. And then if that’s not enough, we will present the facts with even more precision. 20 Minutes would like to point out that this possible evidence is not in its possession.

Are his claims substantiated or confirmed?

But 20 Minutes sought to verify these serious accusations of racism. This Wednesday morning, we have still not had any confirmation of these facts or acts after having contacted, like other media, many people (players, staff members, employees, agents, families, close to the club, etc.). We also spoke to a young player of color in the squad who has been witness to these insults according to several sources and who has also had a run-in with Costil and Koscielny this season for delays in training. His answer: “That’s absolutely false! I have never witnessed any racist remarks from them. Benoit [Costil] is even one of the players with whom I get along the best”. A former club manager, who worked several seasons at the club, also contacted us spontaneously on Wednesday. “I read the newspapers like everyone else and I can assure you that I have never heard from Costil and Koscielny racist remarks. On the contrary, Costil is the most frank and loyal player I have seen with his teammates. »

What is the reaction of the players?

The two former French internationals are of course very affected. They categorically deny these accusations. It is not known at the moment if Benoit Costil’s complaint will be filed for “slanderous denunciation” and / or “defamation” and if it will target one or more people in particular. There is a very good chance that Laurent Koscielny will do the same. The rest of the locker room quickly gave their support to the two men at the start of the week. The idea of ​​a joint statement has been raised but at this time, it has still not seen the light of day. 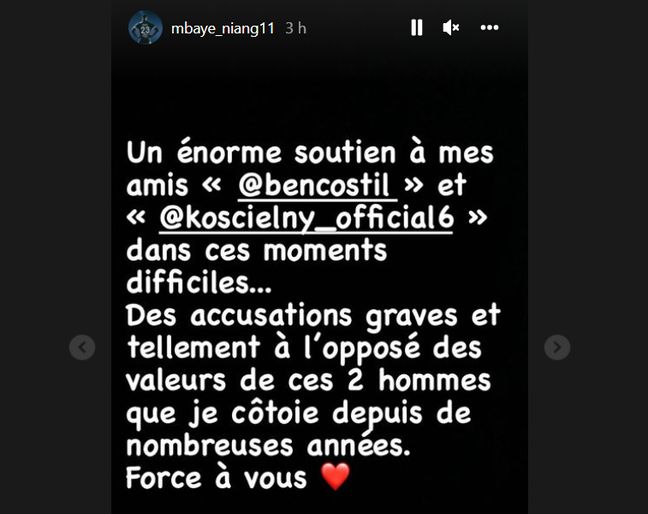 This Wednesday, a first player publicly showed his support for Costil and Koscielny via his Instagram account. It is Mbaye Niang: “Huge support to my friends in these difficult times. Serious accusations and so contrary to the values ​​of these two men that I have known for many years. Strength to you”. In any case, tensions with the management remain strong between the club’s very late reaction to this affair and the tweets of President Gérard Lopez defending the supporters and once again denigrating his players after the defeat against Montpellier. The passage about the position of the players in the club’s official press release was also deleted later, as explained by Sud Ouest. Why ?

What does the club say?

After 48 hours of radio silence, the Girondins de Bordeaux finally reacted through a press release sent to… a media. The club claims to have “been informed of the existence of allegations concerning unacceptable behavior and racist remarks which could have been made by Club employees” but that to date “no document aimed at supporting these allegations t has been brought to the attention of the Club which, as a matter of principle, intends to exercise the greatest caution and must recall the need to respect the principle of the presumption of innocence. “Some also refer to an internal investigation carried out by the club since this winter. But, we do not know if people have been heard and if it is over.

For its part, the CSE (Economic and Social Committee) of the club arrested the management on Tuesday after several messages from employees. He recalls that the club “has a duty to protect all of its employees, in particular when one of them is accused of an offense without proof or put in danger at his place of work” like Benoit Costil during the match. against Montpellier.